For one Philly priest, all roads lead to Rome 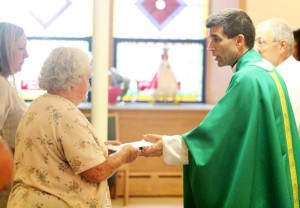 Father James Oliver speaks with parishioners at St. Philip Neri in Philadelphia, where he served as pastor until his Feb. 2018 assignment to the Vatican’s Congregation for the Clergy.

An old proverb claims that “all roads lead to Rome” — and one archdiocesan priest would agree.

Earlier this month, Father James Oliver left Philadelphia for his new assignment at the Vatican’s Congregation for the Clergy.

For Father Oliver — who most recently served in both the archdiocesan office for clergy and as pastor of St. Philip Neri in Philadelphia — the trip to Rome marks a return, rather than a maiden voyage.

Following his ordination in 1988, Father Oliver received his doctorate in canon law from Pontifical Gregorian University in Rome, a course of study that kept him in the Eternal City from 1993 until 1999.

So, does he still remember his Italian?

“We’ll see,” said Father Oliver, speaking by telephone a few days before his flight. “I think it will come back, but I know I’ll keep working on it.”

He’ll be able to ease back into the language, since he’ll be living with fellow American priests at Villa Stritch, a residence owned by the U.S. bishops that houses clergy working at the Vatican.

In fact, Father Oliver has already reconnected with Father Brian Hennessy, a Philadelphia priest who serves as Secretariat of State at the Vatican Apostolic Palace.

After the Super Bowl, Father Oliver and Father Hennessy donned Eagles t-shirts and texted a picture to show their support for the home team.

Despite being 4,440 miles from Philadelphia, Father Oliver has plenty of old friends in his new neighborhood.

“St. Philip Neri is buried in Rome, and he ministered there for many years,” said Father Oliver. “I’m looking forward to living where so many saints lived.”

The Vatican’s Congregation for the Clergy traces its origins to the 16th century, following the Council of Trent. In its present form, the congregation provides overarching support for Catholic clergy throughout the world, particularly with regard to formation and administration.

In his new role, he hopes “to serve the Church on a wider level,” although he’s quick to add that his Vatican duties won’t necessarily require him to interact directly with Pope Francis.

“I have no immediate plans for coffee with him,” Father Oliver laughed. “But we’ll see what happens.”