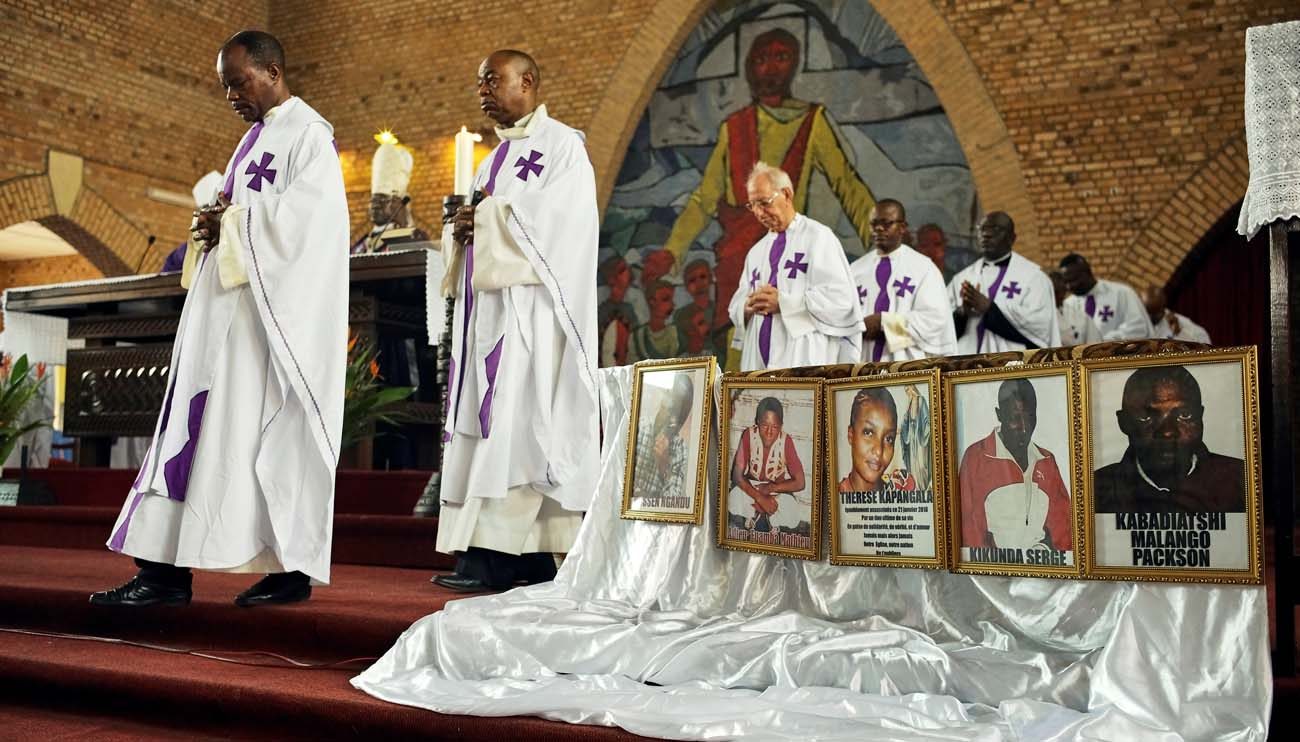 Priests celebrate Mass for citizens killed in recent protests at the Cathedral of Our Lady of Congo in Kinshasa, Congo, Feb. 9. (CNS photo/Robert Carrubba, Reuters)

WASHINGTON (CNS) — Just as people are “struggling to survive” in Congo, aid agencies are struggling to meet their needs, said one aid worker.

Political unrest in and around the capital, Kinshasa, is just the latest malady to afflict the Congolese citizens, said Chiara Nava, an adviser to the AVSI Foundation, an aid agency focusing on education and child protection and inspired by Catholic social teaching. She worked in the country for two-and-a-half years before taking on an advisory role.Still, the difference between the country she worked in and the country she visited in January is noticeable to Nava.

“The political situation is not good at all,” she told Catholic News Service in a Feb. 9 telephone interview from her home in Raleigh, North Carolina. “There are lots of public demonstrations, especially in the capital.”

Layered on top of the upheaval is ethnic fighting. Nava said there are 4.5 million internally displaced people in the country.

Like other international aid agencies, the foundation has a “rapid response mechanism,” a program intended to follow people fleeing from disasters and conflicts, “to help people moving inside a country,” Nava said. “We manage to follow them and provide new humanitarian aid in the areas where they resettle.”

Many of those internally displaced people, she added, “have to flee (only) with anything in their hands, and they need help.” The problem with families, Nava said, is “after two weeks, three weeks, they flee again.”

She told CNS, “We see the most vulnerable being in danger. People are struggling to survive.”

Another underlying reason for the conflict: gold and other minerals, and who lays claim to them.

“In some areas, they (rebels) focus more on fighting with the regular army; in others they are interested in the natural resources where they are. In some cases, they are starving as well,” Nava said. Some rebel militias “burn everything, they kill everything. There’s some frustration among the poorest. Unfortunately, they act this way because they are armed and they have the tools to do that. We find they are not very well educated … and half of them are child soldiers.”

It’s a hit-or-miss situation in Congo.

“Some areas are well-controlled. Local administration functions quite well,” Nava said. “In other areas, they suffer from this ethnic conflict, and the position of the government for excavation of national resources is not very clear. There are not a lot of situations — there are lots of different shapes of this main problem.”

Absent from Nava’s equation is Joseph Kony’s Lord’s Resistance Army, which has been fighting in the north part of the country. The AVSI Foundation no longer has workers in that region.

The safety of its aid workers, now mostly in the eastern part of the country, continues to be a concern.

“We keep on going. So far, we are reviewing our contingency measures and contingency plans,” Nava told CNS. “We want to work in fragile contexts and fragile situations.”

NEXT: Catholic institute: Kids could be harmed if Scotland changes gender law