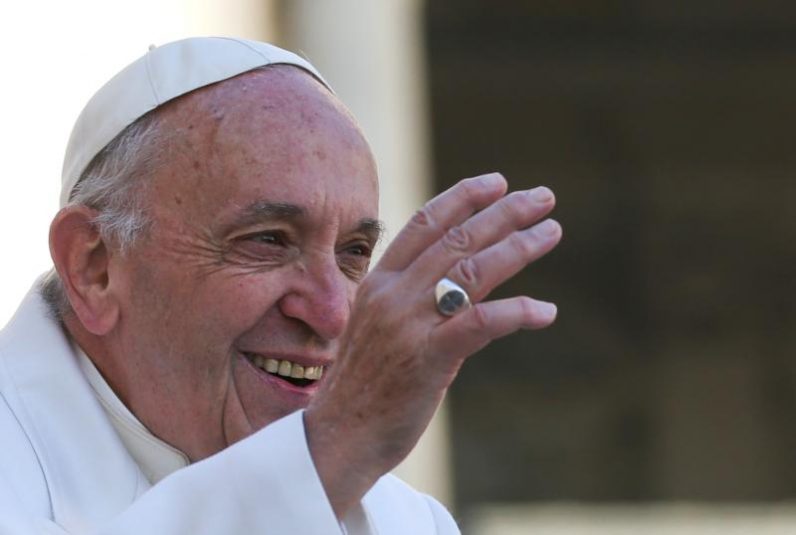 In this file photo, Pope Francis smiles as he leads his general audience Jan. 24, 2018, in St. Peter’s Square at the Vatican. (CNS/Tony Gentile, Reuters)

VATICAN CITY (CNS) — Pope Francis implored artists to “make the deep beauty of God’s love visible” and to create and protect areas of beauty in the world’s teeming cities.

Meeting a group of musicians, actors, poets, painters, dancers, sculptors and architects Feb. 24, Pope Francis urged them to help people “discover the beauty of being loved by God and bear witness to it in attention shown to others, especially those who are excluded, wounded and rejected in our societies.”

The artists are part of a movement called “Diakonia of Beauty,” created in 2012 to restore a relationship in which the Catholic Church relies on artists to share the Gospel and in which the artists seek to learn from and serve the church.

“You are asked to work without letting yourself be dominated by the search for vain glory or easy popularity, and even less by personal profit alone,” the pope told the group, which is particularly active in France.

Too often today, the pope said, people think technology holds the key for understanding the meaning of life. But beauty is a much better path to understanding, he said, urging the artists to create and safeguard “an oasis of beauty,” especially “in our cities, which are too often filled with cement and lacking soul.”

The 86-year-old actor Michael Lonsdale is part of “Diakonia of Beauty” and spoke about spirituality and art in an interview with the Vatican newspaper, L’Osservatore Romano.

In an industry where faith often is not valued, he said, “for me, the Mass always is non-negotiable. Meetings with my spiritual director and confession have sustained me.”

Lonsdale played the role of Brother Luc in the film “Of Gods and Men” about the 1996 massacre of the Trappist monks of Tibhirine, Algeria. Pope Francis recently recognized the monks as martyrs and cleared the way for their beatification.

“With the film ‘Of Gods and Men’ I reached a peak,” he said. Together with playing the abbot in “The Name of the Rose,” playing Brother Luc “will remain one of the most important roles of my life. He was an absolute model of humanity, capable of carrying out the mission of following the commandments of Christ to the end, because there is no proof of love greater than giving your life for those you love. And those he loved was the whole world.”

The “Diakonia of Beauty,” Lonson said, has been important because “joining other artists top form a spiritual family roots us more deeply in the heart of God.”

Contributing to this story was Wyatt Noble at the Vatican.