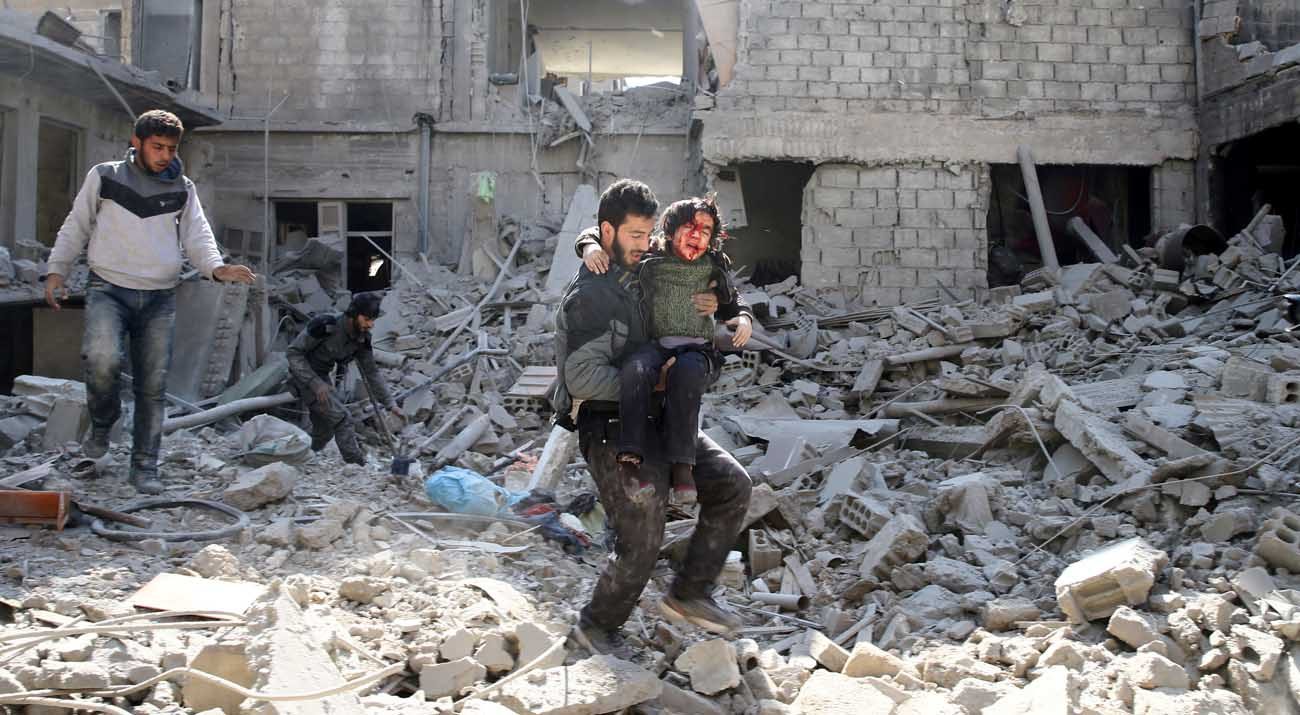 AMMAN, Jordan (CNS) — A Syrian Christian political leader has joined the growing ranks of international condemnation over violent attacks in Syria’s northwestern area of Afrin and the Damascus enclave of Eastern Ghouta.

“The struggle is no longer in the Syrian people’s hands, it is a regional and an international conflict with colliding interests. What is happening in Afrin and Ghouta is tragic,” Bassam Ishak told Catholic News Service by phone.

“It’s a fight between regional and international countries, such as Russia, Iran and Turkey, seeking to acquire territory and influence and to establish their hegemony in these areas,” said Ishak, who heads the Syriac National Council. A graduate of The Catholic University of America in Washington, D.C., he is also a member of the political bureau of the Syrian Democratic Council.

“We met around the clock with U.S. senators and congressmen, and sent a letter expressing grave concern over Afrin, signed by eight of their number, to U.S. Secretary of State Rex Tillerson ahead of his recent meeting with Turkish President Recep Tayyip Erdogan,” Ishak said.

“Before the revolution, Afrin had 500,000 Kurds. It has since taken in 400,000 Arab Sunni Muslim internally displaced peoples” escaping fighting in other areas. “And it has been peaceful, without any of the sectarianism evidenced in other parts of Syria,” the Christian politician said.

“People there also have religious freedom and freedom to worship as they choose. Where else do you find this in Syria or the rest of the Middle East region?” Ishak asked. “Afrin is a model of tolerance, gender equality, pluralism of all religions. Turkey doesn’t want that.”

“There is no one anymore fighting for democracy or the aspirations of the revolution,” Ishak said.

Many civilian causalities have been reported since Turkish military forces, with the support of radical Islamist groups, invaded the city of Afrin Jan. 20. The city, a Kurdish area of northwestern Syria, is around 30 miles from Aleppo.

Eastern Ghouta has been under fierce bombardment from Syrian government forces backed by Russian air power. It is the last major rebel-held suburb of Damascus.

Syria’s military claims it is trying to free the enclave of “terrorists,” but it has also been accused of targeting civilians. More than 335 people have been reported killed in an assault that started Feb. 18. Reports also claim more than 1,200 people have been injured. The situation has been exacerbated by air attacks on hospitals, clinics and ambulances.

U.N. Secretary-General Antonio Guterres, a Catholic, has demanded an immediate end to fighting in Eastern Ghouta, describing the rebel enclave as a “hell on earth.”

“I believe Eastern Ghouta cannot wait,” Guterres told the U.N. Security Council Feb. 21. The council is considering a resolution calling for a 30-day cease-fire in Syria.

Bishop Declan Lang, chairman of the English and Welsh bishops’ Department for International Affairs, said in a statement that “the slaughter of civilians, including many children, in Eastern Ghouta is a grievous offense to our common humanity.”

He also criticized the international community for failing to protect ordinary Syrians.

“In this dark moment I urge Catholics in England and Wales to pray for the people of Eastern Ghouta and Syria; to encourage our own government to help end the violence; and to support generously those humanitarian agencies that are bravely working to save lives,” Bishop Lang said.

On Feb. 23, the day of prayer and fasting for peace, the pontiff is expected to make special mention of Syria.