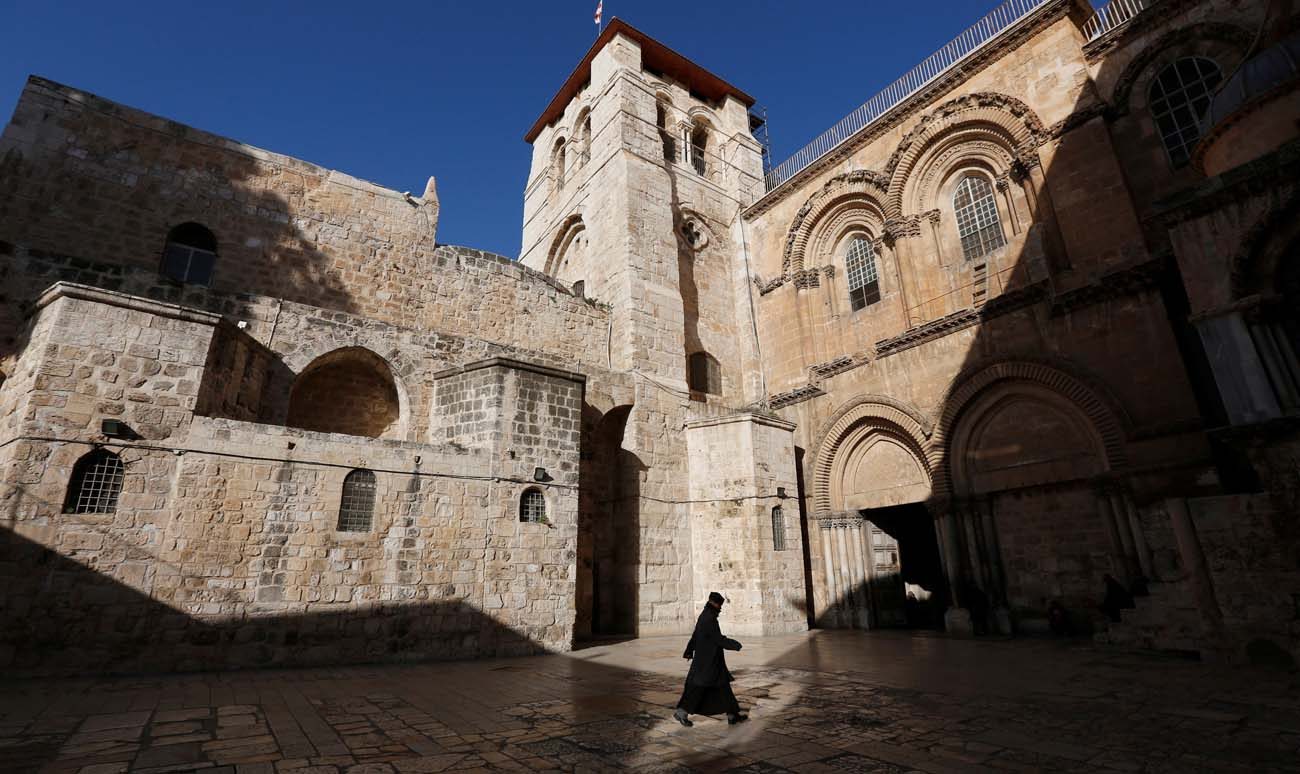 A monk walks outside Jerusalem's Church of the Holy Sepulcher in 2013. (CNS photo/Baz Ratner, Reuters)

JERUSALEM (CNS) — The heads and patriarchs of Christian churches in Jerusalem strongly denounced the city of Jerusalem’s plan to force churches to pay property taxes.

The proposal to levy taxes on some properties would run contrary to unofficial historical tax-exempt status the churches have enjoyed for centuries, the leaders said in a Feb. 15 statement.

“The civil authorities have always recognized and respected the great contribution of the Christian churches, which invest billions in building schools, hospitals, and homes, many for the elderly and disadvantaged, in the Holy Land,” the statement said.

The leaders called on city officials to retract their intention and to “ensure that the status quo, which was sanctioned by the sacred history, is maintained, and the character of the Holy City of Jerusalem is not violated.”

“We declare that such a measure both undermines the sacred character of Jerusalem, and jeopardizes the church’s ability to conduct its ministry in this land on behalf of its communities and the world-wide church,” they said. “We stand firm and united in our position to defend our presence and properties.”

Fines totaling millions of dollars were handed out by the Jerusalem municipality last week to properties owned by the United Nations and by churches, citing a new legal opinion that determined the properties are not legally defined as places of worship and therefore were not entitled to exemptions from property tax.

Some observers said the step appeared to be an escalation in a financial dispute between the municipality and the Israel’s Ministry of Finance, with Jerusalem Mayor Nir Barkat demanding the ministry provide his city with more funding. The threat to fine the churches seems to be another way the municipality is pressuring the ministry to release more funds to the city, which is one of the poorer larger cities in the country, observers said.

In late January, Barkat threatened to fire more than 2,000 municipal employees because, he said, Israeli Finance Minister Moshe Kahlon is preventing necessary funds from reaching the municipality. The announcement led to a citywide strike of municipal services, including garbage collection, which left trash and debris strewn throughout the city.

The Israel Hayom newspaper reported that the religious institution with the biggest tax bill was the Roman Catholic Church, owing more than $3.3 million.

Among the properties slated to be fined is the Notre Dame of Jerusalem hotel, restaurant and conference center across from the Old City, which is owned by the Vatican. The director of the complex declined to comment on the issue.

The Holy See and Israel have been in negotiations over the status of its Jerusalem holdings since 1993, when diplomatic relations were established.

NEXT: Nuns withdraw from ministry in Mexican city wrought by violence