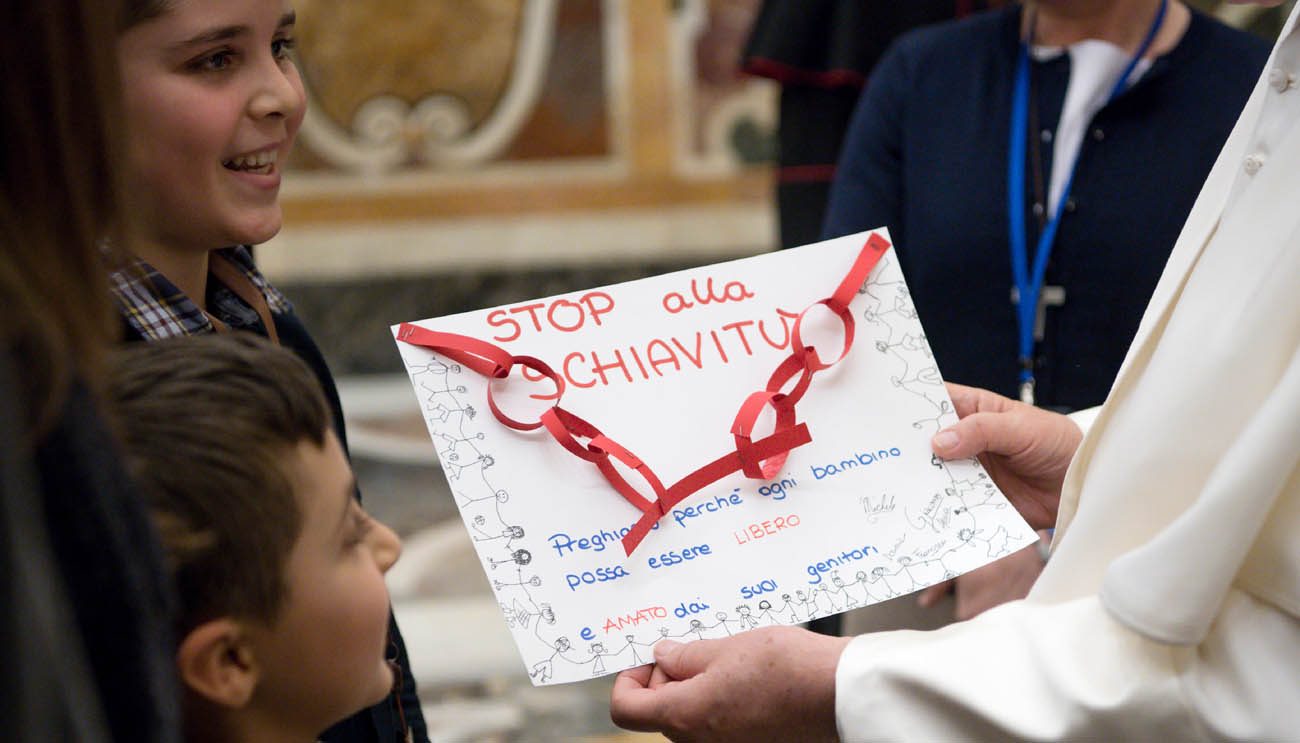 Pope Francis meets at the Vatican Feb. 12 with Italian young people, adults and migrants rescued from human traffickers. The pope responded to the questions five of the young people asked about preventing trafficking and assisting survivors. (CNS photo/L'Osservatore Romano).

VATICAN CITY (CNS) — Prosperous nations where foreign women are forced into prostitution need to drop their hypocrisy and “face the idea that they are part of the problem, rather than turning away, proclaiming their innocence,” Pope Francis said.

“If many young women victims of trafficking end up on the streets of our cities, it is because many men here — young men, middle aged, older men — ask for their services and are ready to pay,” the pope told a group of adults and teenagers who had taken part in a reflection on human trafficking.

Meeting the group Feb. 12, Pope Francis responded to questions from the high school students and from young migrants about ways they could help fight trafficking and reach out to survivors.

One of the migrants asked the pope why there was such a “surprising silence” about the reality of trafficking.

Part of it is ignorance, the pope said, but much of the silence comes from embarrassment. Citizens must be “courageous and honest” enough to acknowledge people working in prostitution or slave-like conditions and reach out to help them.

Through parishes and youth groups, he said, Catholic young people should meet survivors of trafficking, listen to their stories and befriend them. “Don’t be afraid to meet them,” the pope said. “Open your hearts, let them in.”

One young migrant, speaking in English, asked the pope what could be done to prevent trafficking when, in her country, with promises of jobs in Europe young people are tricked into slavery and prostitution.

“How horrible it is to realize that many young victims were first abandoned by their family, considered disposable by their societies,” the pope said.

Young people need to be educated to understand the traffickers’ ploys and the reality that likely awaits those who fall into their clutches, he said. Survivors of trafficking can have a huge impact by sharing their stories.

Education also is important so that young people can get decent jobs at home or go to universities and not be tempted by the false promises of traffickers, he said.

But, one of the migrants told the pope, it is “almost impossible” to find a decent job in Europe. More must be done, the pope said, to create jobs for young people, especially for survivors who have been rescued from traffickers.

Pope Francis told the group he hoped some survivors of trafficking would address the Synod of Bishops on youth in October to share their stories and “call the church to action.”

“It is my great desire,” he said, “that young people representing the ‘peripheries’ would be the protagonists of this synod.”

In a section not included in the updated text released by the Vatican, SIR said the pope commented on how the news media can manipulate facts to feed an anti-immigrant sentiment.

“I read in a newspaper that in a small town in Italy there were many rapes and that 40 percent of those responsible were migrants,” he said. “But the other 60 percent? They were Italian!”

“This is a way to sully migrants,” the pope said, according to SIR. “There is a way to recount facts that changes the truth.”

NEXT: Muslims who desecrated statue ordered to memorize Quran verses about Mary