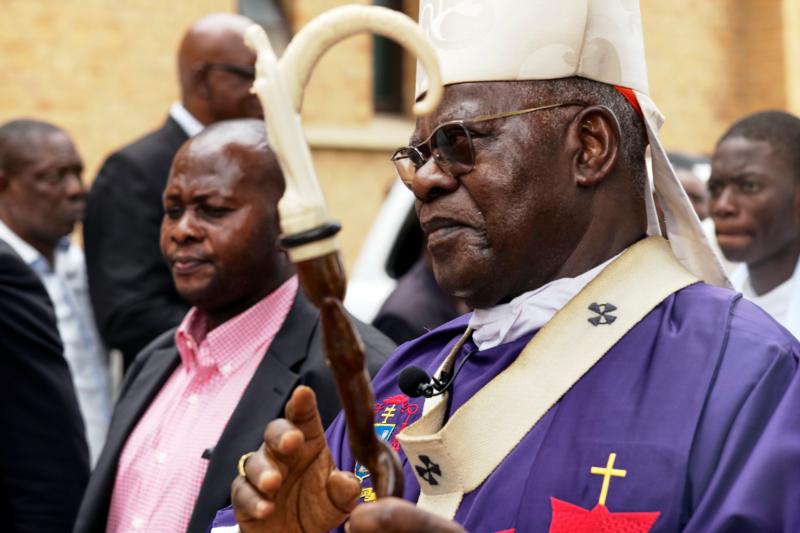 Cardinal Laurent Monsengwo Pasinya of Kinshasa, Congo, blesses worshippers after celebrating Mass Feb. 9 at the Cathedral of Our Lady of Congo in Kinshasa for demonstrators killed in recent protests. (CNS photo/Robert Carrubba, Reuters)

The world “is witnessing poisonous campaigns of denigration and defamation, designed to weaken our church’s moral force,” said a statement from the bishops’ conference.

“Unswerving in our faith in Jesus Christ, king of the universe, and faithful to our prophetic mission, we will never abandon our engagement for the advent of a state of law.”

In a statement, carried by local newspapers Feb. 20 after a plenary meeting in the capital, Kinshasa, the bishops condemned the “bloody violence” used by government security forces to suppress marches by mostly Catholic protesters Dec. 31 and Jan. 21. They also pledged support for Kinshasa Cardinal Laurent Monsengwo after media and politicians loyal to President Joseph Kabila attempted to discredit him.

“Why were so many killed, injured, arrested and abducted, so many churches profaned and so many prayers interrupted? What crimes had been committed by these Christians and Congolese citizens?” the bishops asked.

The bishops have pressed Kabila to step down since his second and final term expired in December 2016. A church-brokered accord, signed Dec. 31, 2016, allowed the president to stay in office pending elections by the end of 2017. However, in November, Congo’s Electoral Commission said the ballot had been postponed until Dec. 23, 2018.

Congolese newspapers reported Feb. 1 that a group of assailants had been dispersed by bodyguards after breaking into Cardinal Monsengwo’s residence. The cardinal has criticized Kabila’s failure to honor the 2016 accord.

In its statement, the bishops’ conference said the church’s “sole preoccupation” was to “contribute to the Congolese people’s well-being and to safeguard and promote the dignity of the human person, respect for life and fundamental liberties and rights.”

“We demand an end to prosecutions and threats against the organizers of peaceful marches who have merely exercised their constitutional rights — and for the state’s authority to be rendered credible and effective in safeguarding the integrity of our national territory, protecting our frontiers and assuring security for our population,” the bishops said.

They urged Congolese to be vigilant and to pray and participate in “initiatives aimed at peacefully barring any attempt to confiscate or seize power by nondemocratic, anti-constitutional means.”

The United Nations says 15 people were killed, 70 injured and 115 arrested, including 10 priests and two nuns, during the Dec. 31 and Jan. 21 protests, organized by the Catholic Lay Coordinating Committee.

The family statement said the order to fire live rounds could constitute “a crime against humanity,” since it was directed against a church protected under the Geneva Conventions.

Pope Francis has declared Feb. 23 a Day of Prayer and Fasting for Peace, particularly for Congo and South Sudan.