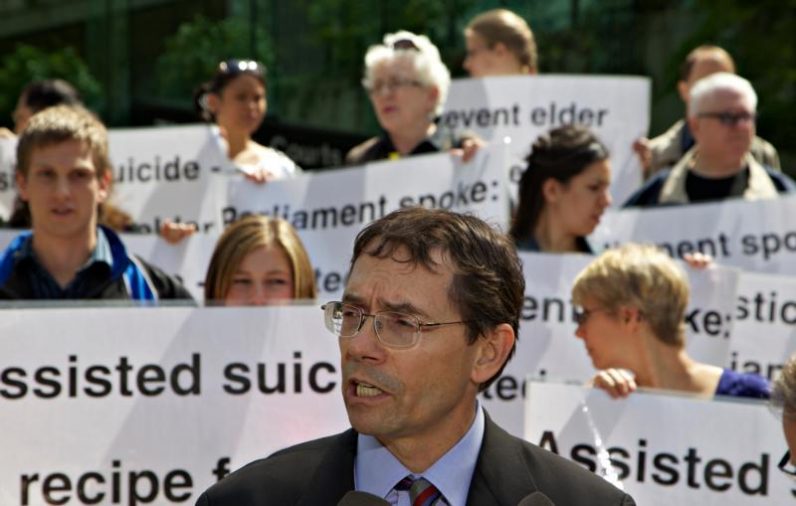 Dr. Will Johnson, the coordinator for the Euthanasia Prevention Coalition, speaks in 2012 outside the British Columbia Supreme Court in Vancouver. (CNS photo/Andy Clark, Reuters)

Provincial health authorities are “making a serious error” in trying to coerce caregivers — “committed to making the final stages of life for the elderly, sick, and suffering meaningful and dignified” — into supporting assisted suicide, the archbishop said in a Feb. 22 statement.

“Assisted suicide stands in stark contrast” to the care that hospices offer, and none should be compelled to provide it, he said.

More than 2,000 Canadians have died of assisted suicide since the practice was made legal in June 2016. Archbishop Miller said that points to a dire need for better end-of-life care, not increased access to a lethal injection.

“If the elderly, sick, and suffering in our population feel that euthanasia is their best option, it means we as a society and as individuals are letting them down,” he wrote.

“In nearly every case, we can provide adequate pain management to comfort patients. But what about the lonely, the abandoned, and those who see themselves as a burden to others or society? How do we address their needs and assure them life has meaning?”

By providing “true compassion,” he said, answering his own question. “We are called to suffer with the sufferer, not to end his or her life.”

Archbishop Miller is the latest voice to join many health care workers, volunteers, community leaders and concerned citizens calling foul over a recent announcement from the regional Fraser Health Authority that hospices in its jurisdiction would be required to provide assisted suicide on site if a patient was qualified. Currently, hospices can opt to transfer patients who want to die to a different location for the lethal procedure.

NEXT: Congo’s bishops: Two killed during protests against ‘dictatorship’