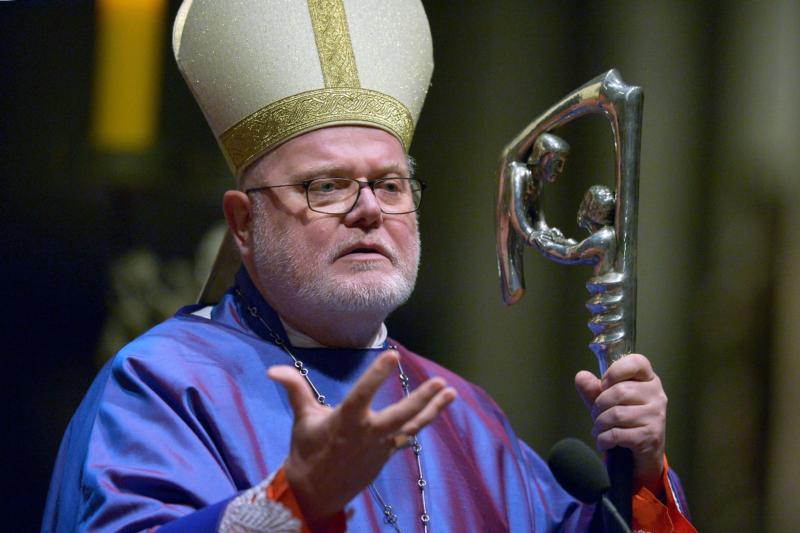 Cardinal Reinhard Marx of Munich-Freising, president of the German bishops’ conference, celebrates Mass in 2017 during the opening of the annual meeting of Germany’s bishops at the cathedral in Cologne. (CNS photo/Sascha Steinbach, EPA)

ROME (CNS) — The president of the German bishops’ conference urged priests to provide better pastoral care to Catholics who are homosexual, but he said, “I think that would not be right” when asked if he could imagine the Catholic Church blessing gay couples.

The German bishops’ conference released an English translation Feb. 7 of remarks Cardinal Reinhard Marx of Munich and Freising, conference president, made during a radio interview Feb. 3.

German Catholic media had interpreted the cardinal’s remarks as moving a step back from a suggestion made by Bishop Franz-Josef Bode of Osnabruck in January that the Catholic Church should debate the possibility of a blessing ceremony for Catholic gay couples involved in the church.

But some English-language media and blogs portrayed Cardinal Marx’s remarks as meaning he “endorses” such blessing ceremonies.

The coverage led Archbishop Charles J. Chaput of Philadelphia to write a column encouraging bishops to be clear about what they intend or don’t intend to suggest on the subject.

And, Archbishop Chaput said, “any such ‘blessing rite’ would cooperate in a morally forbidden act, no matter how sincere the persons seeking the blessing. Such a rite would undermine the Catholic witness on the nature of marriage and the family. It would confuse and mislead the faithful. And it would wound the unity of our church, because it could not be ignored or met with silence.”

The Catholic Church insists marriage can be only between a man and a woman. It teaches that while homosexual people deserve respect and spiritual care, homosexual activity is sinful.

In the interview with Cardinal Marx, the journalist said many people believe the church should bless gay unions, ordain women to the diaconate and end obligatory celibacy for priests in the Latin-rite church.

According to the bishops’ conference translation, Cardinal Marx said he did not believe those changes were what the church needs most today. “Rather, the question to be asked is how the church can meet the challenges posed by the new circumstances of life today — but also by new insights, of course. For example, in the field of pastoral work, pastoral care.”

Following the teaching and example of Pope Francis in pastoral care, he said, “we have to consider the situation of the individual, his life history, his biography, the disruptions he goes through, the hopes that arise, the relationships he lives in — or she lives in. We have to take this more seriously and have to try harder to accompany people in their circumstances of life.”

The same is true in ministering to people who are homosexual, he said. “We must be pastorally close to those who are in need of pastoral care and also want it. And one must also encourage priests and pastoral workers to give people encouragement in concrete situations. I do not really see any problems there. An entirely different question is how this is to be done publicly and liturgically. These are things you have to be careful about, and reflect on them in a good way.”

While excluding “general solutions” such as a public ritual, Cardinal Marx said, “that does not mean that nothing happens, but I really have to leave that to the pastor on the ground, accompanying an individual person with pastoral care. There you can discuss things, as is currently being debated, and consider: How can a pastoral worker deal with it? However, I really would emphatically leave that to the pastoral field and the particular, individual case at hand, and not demand any sets of rules again — there are things that cannot be regulated.”

The spokesman of the bishops’ conference said the cardinal was unavailable for further interviews.