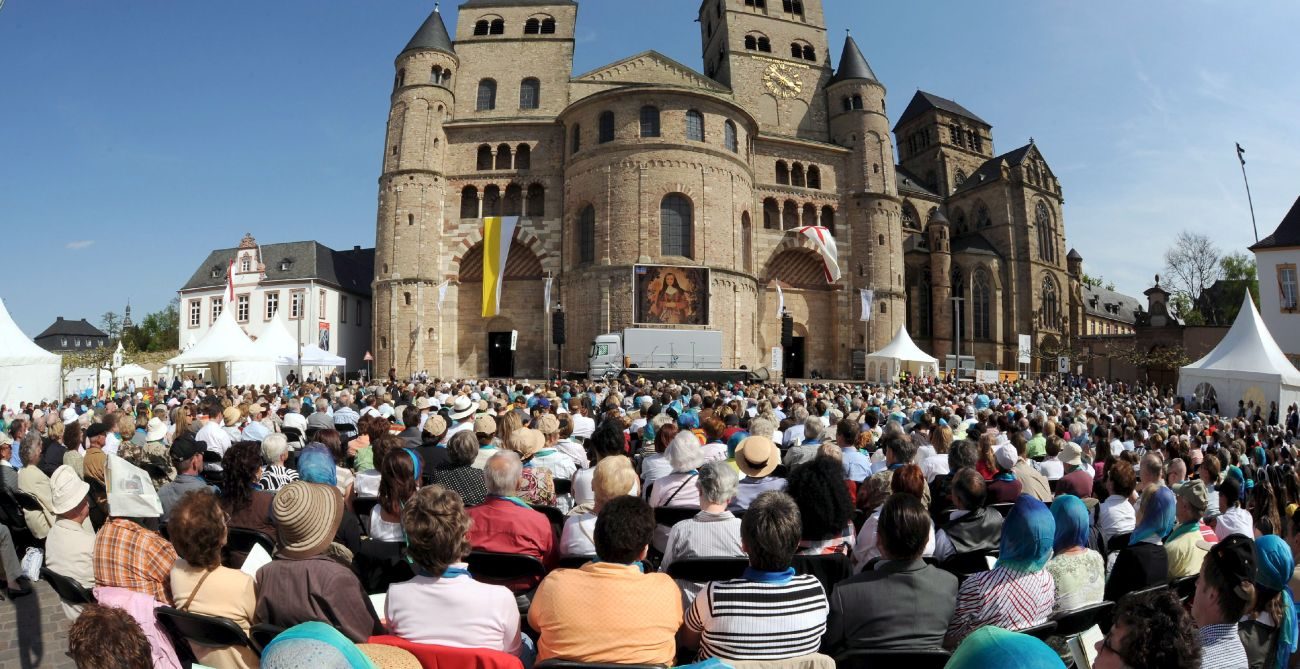 People celebrate the beatification of Mother Rosa Flesch at the cathedral in Trier, Germany, in this 2008 file photo. One of Germany's oldest Catholic dioceses has become the latest to unveil a major reorganization, in the face of rising costs and declining church membership. (CNS photo/Harald Tittel, EPA)

OXFORD, England (CNS) — One of Germany’s oldest Catholic dioceses has become the latest to unveil a major reorganization, in the face of rising costs and declining church membership.

In an interview with Catholic News Service, Judith Rupp, spokeswoman for Germany’s western Trier Diocese, said the changes would require less time and money on “administration and structural issues” and respond to calls by the pope for “missionary creativity.”

“The great challenge for Christians in our own diocese is a pastoral one,” Rupp told CNS. “We want to focus more strongly on people’s needs and integrate the charisms of the baptized into church life more than before.”

On Feb. 16, Trier Bishop Stephan Ackermann announced the diocese would reduce its 172 parishes to 35. Under the reorganization, to take effect in 2020, each new parish will he headed by a priest and two full-time laypeople, with one or two management volunteers.

In a diocesan website interview, Bishop Ackermann said local lay councils and expert groups would continue playing a role in the reorganization, but said final responsibility for “such a great reform” would lie with him.

“While the parish has been integral to Western Christian civilization, it’s also faced profound and rapid change,” said the bishop. “This has necessitated new models and stronger network systems. We simply cannot continue as in the past.”

However, the German Press Agency DPA reported the planned changes had faced resistance, with some Catholic communities fearing a loss of resources to the new parishes.

Rupp confirmed that complaints had been made about “asset management,” but said a 2016 diocesan synod had incorporated “people from the entire diocese,” who would be encouraged to share responsibilities with Trier’s 1,016 priests and deacons and 1,740 religious order members.

“In each new parish, priests, deacons and pastoral ministers will all work on different issues and tasks,” Rupp said.

“Of course, not everyone agrees with our plan — many still need convincing. Overall, however, the faithful understand the need for a comprehensive reform,” she said.

Parallel parish reorganizations are underway in other parts of Europe, where a sharp drop in active church membership since the 1960s has accelerated over the past decade, despite efforts by church leaders to reach out with new forms of evangelization.

In 2012, Germany’s Berlin Archdiocese announced it would merge its 105 parishes into 35 larger “pastoral spaces,” while selling off unused churches and cutting 40 percent of its clergy and lay staffers, to cope with debts of $140 million since Germany’s 1989-90 reunification.

Austria’s Vienna Archdiocese is also merging its 660 parishes into 150 larger entities, each served by three to five priests, while the Catholic Archdiocese of Luxembourg is reducing its existing 274 parishes to just 33.

Ireland’s Clogher Diocese has also clustered 37 parishes into 14 “pastoral areas,” coordinated by “pastoral support groups” of two priests and six laypeople, while the president of the Dutch bishops’ conference, Cardinal Willem Eijk, has introduced plans to merge his Utrecht Archdiocese’s 326 parishes into 48 larger units, each with a single church as “eucharistic center.”

Rupp told CNS Trier had been unusual in convening a diocesan synod to debate reforms.

“We’re trying to change the image of the parish more radically than other dioceses, by introducing a highly pluralistic pastoral framework,” she said.

“Changes are plainly required in the church’s life and structures. Whether a diocesan synod is the best forum for identifying and implementing them will be seen in future.”

The Trier changes were announced as Germany’s 66-member bishops’ conference met in Bavaria to discuss the October Synod of Bishops on youth, pastoral care of refugees and ties with Catholics in Eastern Europe.

Germany’s Catholic news agency, KNA, said the bishops also would discuss a January announcement by Archbishop Stefan Hesse of Hamburg that he planned to close eight of his diocese’s 21 Catholic schools to pay off a debt of $97 million, as well as a financial scandal in the Eichstatt Diocese, where a church staffer faces fraud ch

NEXT: Ghanaian bishop urges Africans to learn from Laudato Si’