In silence and in secret, Albanian nuns left legacy from communist times 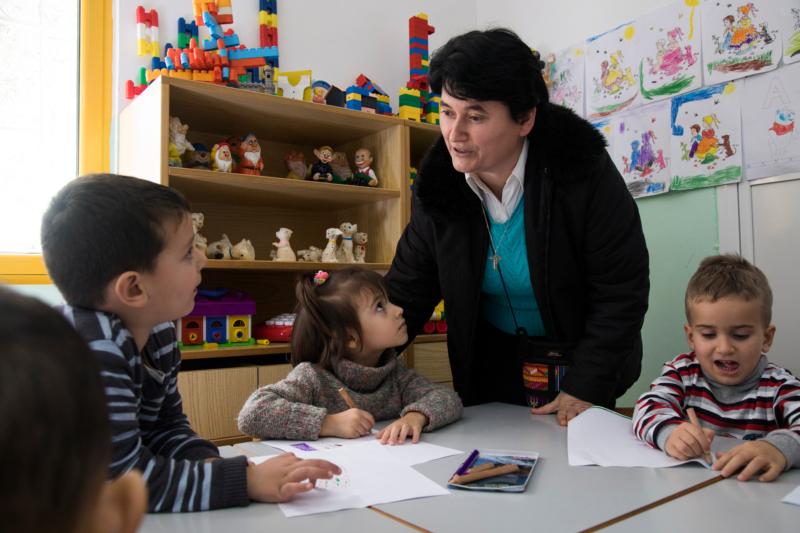 Sister Bardhe Gjini, a member of the Reparatrix Sisters Servants of Mary, works with students in 2017 at her congregation’s kindergarten in Vlore, Albania. More than 100 children attend the kindergarten. CNS photo/Oscar Durand) S

VLORE, Albania (CNS) — Sister Bardhe Gjini was scared of her aunt, a nun, when they first met in 1993.

Sister Gjini, then 21 and not even baptized, said she was afraid because her aunt and the other sisters “were all dressed in black, just like widows.”

Her aunt, Sister Julja Gjoka, asked if she would like to become a religious sister. Sister Gjini told her no.

But today, in the same city where they first met, Sister Gjini continues the legacy of her late aunt, who was part of a religious community of five women who lived their faith in secret during communist times.

Starting in 1945, Albania was ruled by the harsh and repressive communist regime led by Enver Hoxha. The government persecuted and killed hundreds of clerics and laypeople.

In 1967, the communist regime officially banned organized religion, dissolving religious institutes and deporting their foreign members. Albanian members were ordered to go back to their hometowns and quit their religious life.

In Vlore, five members of the Servants of Mary Passion Lady of Shkodra decided to defy the order, despite the risk of imprisonment and death. Sister Gjoka was the youngest of them and had not yet professed her final vows.

The nuns continued living in the two-floor residence attached to the Church of St. Luigj. The government seized the church, remodeled its walls, destroyed its bell tower and turned it into a theater.

The communist regime’s secret police had an extensive network of informants, and the sisters had to resort to creativity to practice their faith. Because they could not wear their religious habits, they chose an attire the government had not outlawed: the black clothes women wore as sign of bereavement.

The nuns only could pray among themselves and indoors, where no one could see them. The pictures hanging on their walls were double-sided: communist-themed images on one side to show publicly and a religious image on the other, used to pray in private. They also kept a statue of the Virgin Mary, described to inquisitive visitors as the likeness of a young bride. Hidden in the bottom of the statue was the sisters’ stash of Communion wafers.

Sister Gjini, who remembers her aunt’s stories, said those were extraordinary times for the sisters.

“They had chosen Jesus Christ, and they knew they had to follow him no matter what,” she said.

The communist regime collapsed in 1991, and missionaries from other countries poured in to help rebuild the Catholic Church in Albania. Sister Gjoka was finally able to take her perpetual vows.

The church of St. Luigj was also rebuilt, including its bell tower — although the sound emanates from an electronic sound system instead of an actual metal bell. The church was renamed St. Maria and St. Luigj, to honor Mary, whose statue reminded the sisters to keep their faith strong during trying times.

During the spring of 1993, Sister Gjini stayed a month with her aunt and spent time among volunteers and missionaries. That experience had a strong influence on her vocation.

“Seeing the youth coming and speaking with the sisters with so much joy made me curious about becoming a sister,” Sister Gjini said.

Six months later, she returned to Vlore and told her aunt she wanted to become a nun. A surprised Sister Gjoka replied, “You haven’t even been baptized, how can you become a sister?” Sister Gjini had grown up during communist times when religion was forbidden and had not received any of the sacraments.

But that did not become an obstacle. Sister Gjini took her first vows in 1998, joining the Reparatrix Sisters Servants of Mary.

The congregation, founded in Italy in 1900, arrived in Albania right after the fall of communism in 1991. They immediately recognized the need for Catholic education, and in 1999 they opened a kindergarten for 120 children in Vlore.

Sister Gjini said Catholic education is important because the schools are forming a generation with strong human and spiritual values. Although they would like to have also a school, they are limited by their numbers. In Vlore they are only four sisters, one of whom is 82.

Sister Gjoka died in 2011. Although she was forced to live a quiet life, her niece said she left a strong legacy.

“She had to be silent, but she spoke a lot through her silence — in her silence and her work with the poor,” Sister Gjini said. “I have my freedom, and I have to do what I can to do the best. This is the responsibility of someone who works in education.”