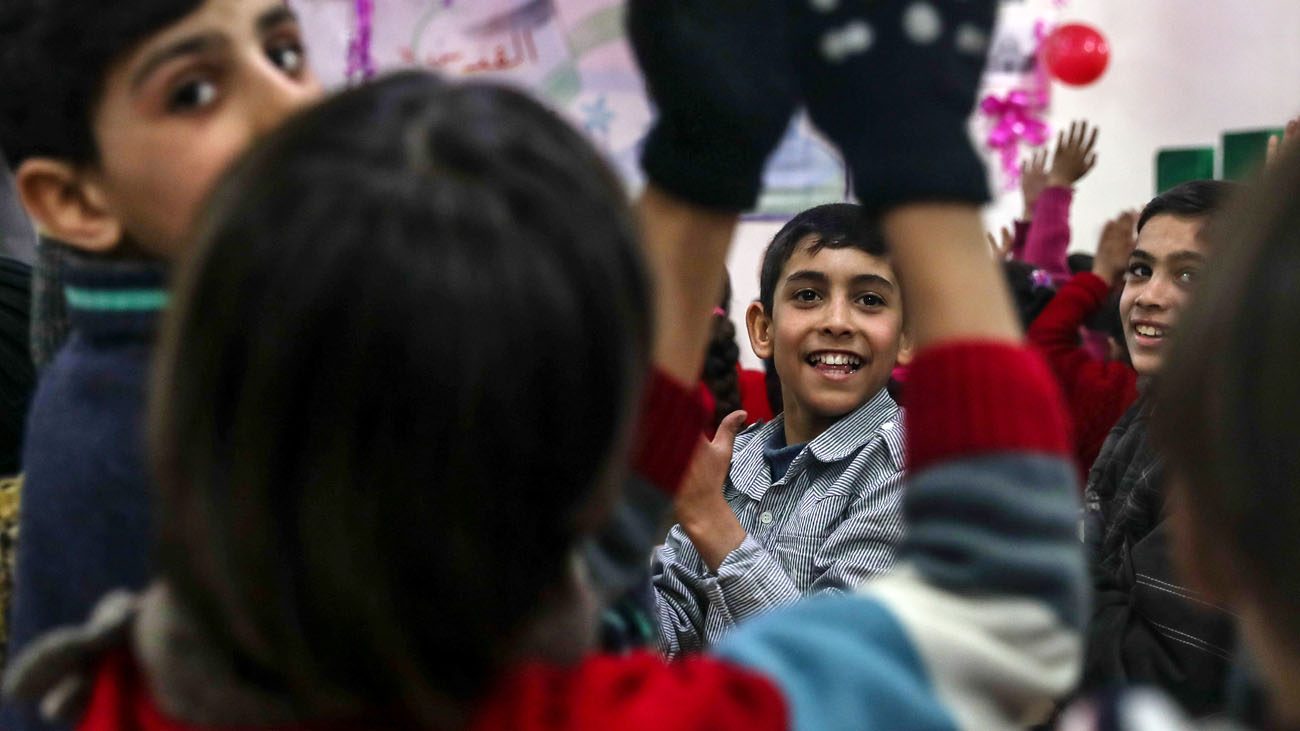 Orphan children are seen during an art lesson about solidarity in Douma, Syria, Dec. 19, 2017. Pope Francis told a group of children and young people at the Vatican that often when people are unable to love or accept a child with problems or illness, it is because they are too weak themselves to be able to bear someone else's vulnerabilities. On Feb. 19 the Vatican released a written transcript of the pope's Jan. 4 remarks. (CNS photo/Mohammed Badra, EPA)

VATICAN CITY (CNS) — When people are unable to love or accept a child with problems or illness, many times it’s because they are too weak themselves to be able to bear someone else’s vulnerabilities, Pope Francis told a group of children and young people who are wards of the state.

“If I have a giant rock, I can’t put it on top of a cardboard box because the rock will crush the box,” he said, explaining how some adults “don’t have sufficient strength to bear fragility because they themselves are fragile.”

The pope met with the group, which included minors living in foster care or receiving other forms of support and help from the Romanian-based NGO, called “FDP: Protagonists in Education.” The Vatican released Feb. 19 a written transcript of the meeting, which was held at the Vatican Jan. 4.

The pope said he received the group’s questions beforehand so he could better prepare to answer them. One question in particular, he said, had made him cry.

The question, which the young man read aloud at the audience, was why his mother didn’t want or accept him. He said he was given up when he was 2 months old and when he turned 21 he got in touch with his birth mother and even stayed with her for two weeks; but he said it didn’t go well and he was forced to leave.

“My father is dead. Am I at fault if she doesn’t want me? Why doesn’t she accept me?” the unidentified man asked the pope.

He urged the young man not to despair or become cynical, but to hold on to hope. “I promise to pray that one day she can show you that love.”

These terrible situations have nothing to do with anyone’s fault, the pope said. “It’s a question of the immense fragility in adults, due to, in your case, much poverty, many social injustices that crush the smallest and the poorest.”

“Spiritual poverty,” too, is to blame, he said, because it leads to “hardened hearts, and it causes what seems impossible: a mother who abandons her own child. This is fruit of material and spiritual poverty, fruit of a mistaken, inhuman social system that hardens hearts, that leads to mistakes, makes it so we cannot find the right path.”

This question, the pope said, was much like another question from another young person who asked, “Why are there parents who love healthy children and not those who are sick or have problems?”

“When facing other people’s fragilities, such as illnesses, there are some adults who are weaker, who don’t have enough strength to bear fragility and this is because they themselves are fragile,” Pope Francis said.

Some parents are fragile or weak because they are human beings with their own limitations, sins and vulnerabilities, he said.

“And perhaps they were not lucky to be helped when they were young” to find a person who could take them by the hand and help them grow, become strong and overcome their weaknesses, he added.

“It’s difficult to get help from fragile parents and sometimes it’s us who has to help them” and not blame life for how it turned out, he said, but use one’s own strength so “the rock doesn’t crush the cardboard box.”

Another young person asked, “Why did we end up with this destiny” or lot in life?

While no one knows “the why” or reason that allows these situations or suffering to happen, the pope said, Christians do know “the why, in the sense of the ending God wants to give” to each person’s destiny — that is, healing and new life.

No one knows why things start out a certain way, he said, but there is no doubt where people should be headed: finding and experiencing Christ who always loves and heals; “that’s the why.”

Another young person said that when a friend of theirs at the orphanage had died, the priest told them the boy died a sinner and would not go to heaven.

The pope said no one can ever claim someone — even Judas — has not gone to heaven. “God wants to bring all of us to heaven, nobody excluded.”

God doesn’t just sit around waiting for things to happen, he said. He is the Good Shepherd who is always searching for the lost sheep and is never upset when he finds them, even if they are “dirty with sin” or have been abandoned their whole lives.

“He embraces them and kisses them,” puts them on his shoulders and brings them home, the pope said, adding that according to what he knows about Jesus, “I am sure this is what … the Lord did with your friend.”

PREVIOUS: Pope says Paul VI will be declared a saint this year

NEXT: Thirsty souls are quenched by God, not world, priest tells pope, Curia