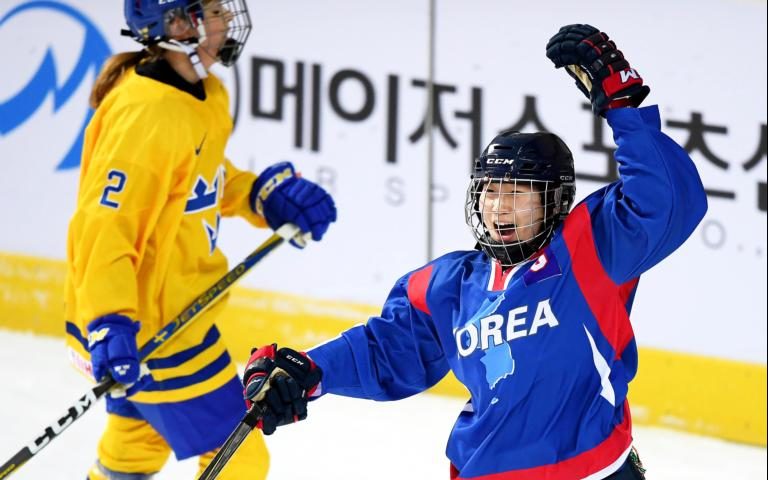 Park Jong-ah of the Korean unified women’s ice hockey team celebrates after scoring a goal during a friendly match against Sweden Feb. 4 in Incheon, South Korea. The presence of a unified delegation and team for North and South Korea at this year’s Olympic Games gives people hope for a world dedicated to peace through dialogue and respect, Pope Francis said. (CNS photo/Yonhap, EPA)

VATICAN CITY (CNS) — The presence of a unified delegation and team for North and South Korea at this year’s Olympic Games gives people hope for a world dedicated to peace through dialogue and respect, Pope Francis said.

At the end of his weekly general audience at the Vatican Feb. 7, the pope offered his prayers and greetings to all those gathered for the XXIII Winter Olympic Games Feb. 9-25 in Pyeongchang, South Korea.

“The traditional Olympic truce takes on special importance this year as delegations of the two Koreas will walk together under a unified flag” during the opening ceremony and compete as one team in women’s ice hockey, he said.

“This fact builds hope for a world in which conflicts are resolved peacefully with dialogue and mutual respect,” just as sports teach people to do, he said.

The pope sent his greetings to the International Olympic Committee, which invited a Vatican delegation to participate in the opening ceremony as well as its annual session as an observer. The pope also greeted all the athletes as well as leaders and citizens of the whole Korean peninsula.

Saying he would pray for everyone, he reminded people that the Holy See supports every “useful initiative fostering peace and the encounter of peoples. May these Olympics be a great celebration of friendship and sport.”

NEXT: Two ex-managers of Vatican bank ordered to pay damages for mismanagement