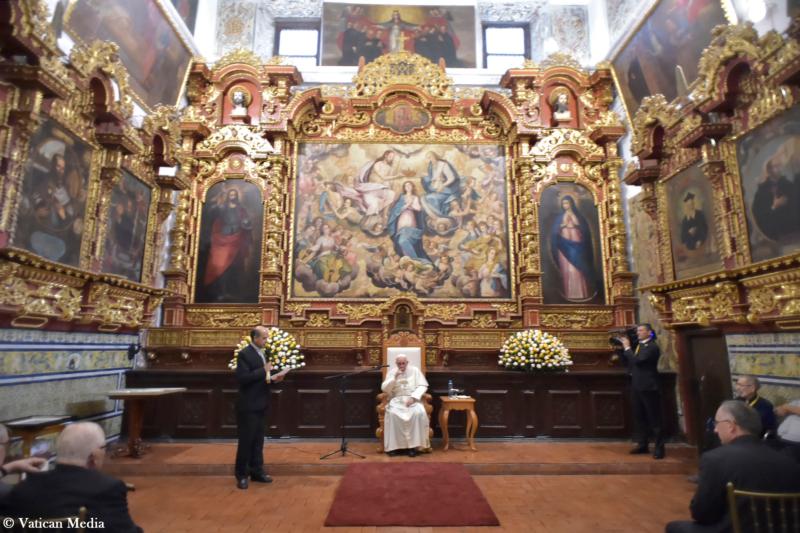 Pope Francis meets Jan. 19 with Jesuits in the sacristy of the Church of St. Peter in Lima, Peru. (CNS photo/Vatican Media)

Pope Francis meets Jan. 19 with Jesuits in the sacristy of the Church of St. Peter in Lima, Peru. (CNS photo/Vatican Media)

VATICAN CITY (CNS) — Pope Francis told a group of Jesuits in Peru that he often meets on Fridays with survivors of sex abuse.

The meetings, which he said do not always become public knowledge, make it clear that the survivors’ process of recovery “is very hard. They remain annihilated. Annihilated,” the pope had told the Jesuits Jan. 19 in Lima.

The scandal of clerical sexual abuse shows not only the “fragility” of the Catholic Church, he said, “but also — let us speak clearly — our level of hypocrisy.”

The director of the Vatican press office Feb. 15 confirmed that the pope’s meetings with abuse survivors is regular and ongoing.

“I can confirm that several times a month, the Holy Father meets victims of sexual abuse both individually and in groups,” said Greg Burke, the director. “Pope Francis listens to the victims and tries to help them heal the serious wounds caused by the abuse they’ve suffered. The meetings take place with maximum reserve out of respect for the victims and their suffering.”

On his trips abroad, Pope Francis usually spends time with local Jesuit communities and holds a question-and-answer session with them. Weeks later, a transcript of the exchange is published by Civilta Cattolica, a Jesuit journal in Rome.

The transcribed and translated texts from Pope Francis’ conversations with Jesuits in Chile Jan. 16 and in Peru three days later were released in Italian and English by Civilta Cattolica Feb. 15 with the pope’s approval, the journal said.

The Jesuits in Chile had not asked the pope about the abuse scandal, even though the scandal was in the news, particularly because of ongoing controversy over the pope’s appointment in 2015 of Bishop Juan Barros of Osorno, who had been accused of covering up the abuse committed by his mentor, Father Fernando Karadima.

Pope Francis met with the Jesuits in Santiago at the end of his first full day in Chile. Earlier that day he had met with “a small group” of people who had been abused by Chilean priests, according to the Vatican press office.

The meeting with the survivors and with the Chilean Jesuits took place days before Chilean reporters asked Pope Francis about the accusations against Bishop Barros and he replied, “The day they bring me proof against Bishop Barros, I will speak. There is not one piece of evidence against him. It is calumny. Is that clear?”

The pope later apologized for the remark and, soon after returning to Rome, sent Archbishop Charles Scicluna of Malta, an experienced investigator, to Chile to conduct interviews.

After the pope left Chile and flew on to Peru, the topic of abuse was even more pressing. In the context of a discussion about spiritual “consolation” and “desolation,” one Jesuit told the pope, “I would like you to say something about a theme that leads to a lot of desolation in the church, and particularly among religious men and women and the clergy: the theme of sexual abuse. We are very disturbed by these scandals.”

Abuse, Pope Francis replied, “is the greatest desolation that the church is suffering. It brings shame, but we need to remember that shame is also a very Ignatian grace.” In his Spiritual Exercises, St. Ignatius of Loyola, founder of the Jesuits, encouraged people to contemplate Jesus’ goodness and their own wickedness, asking for the grace to be ashamed.

The pope told the Peruvian Jesuits that it is a temptation for people in the church to seek a “consolation prize” by comparing statistics about abuse within the church and abuse within families or in other organizations.

But even if the abuse rate is lower in the church, the pope said, “it is terrible even if only one of our brothers is such! For God anointed him to sanctify children and adults, and instead of making them holy he has destroyed them. It’s horrible! We need to listen to what someone who has been abused feels.”

At that point the pope told the Jesuits in Peru, “On Fridays — sometimes this is known and sometimes it is not known — I normally meet some of them. In Chile I also had such a meeting.”

The abuse scandal is “a great humiliation” for the Catholic Church, he said. “It shows not only our fragility, but also — let us say so clearly — our level of hypocrisy.”

Pope Francis also told the Jesuits in Peru that “it is notable that there are some newer congregations whose founders have fallen into these abuses.” He did not specify which congregations, however.

In the “new, prosperous congregations” where abuse has been a problem, he said, there is a combination of an abuse of authority, sexual abuse and “an economic mess. There is always money involved. The devil enters through the wallet.”

PREVIOUS: Cardinal Tagle says everyone has a little migrant in their soul