Rome Colosseum bathed in red in honor of modern martyrs 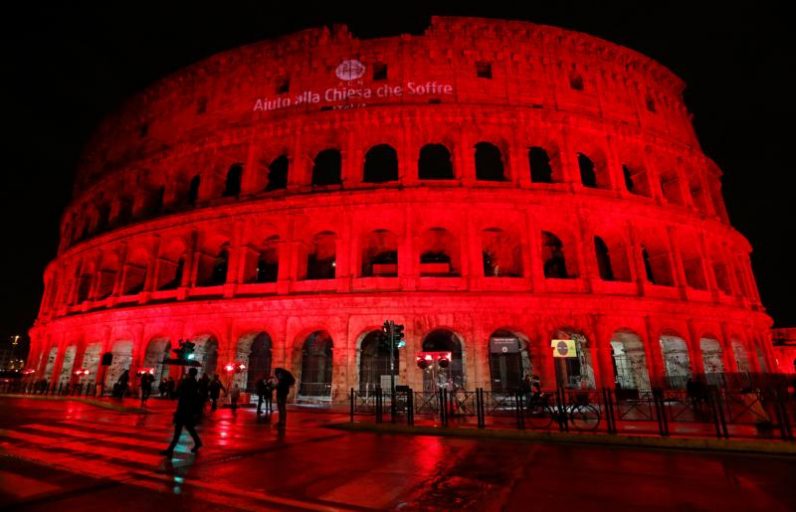 The Colosseum in Rome is lit in red to draw attention to the persecution of Christians around the world. (CNS photo/Remo Casilli, Reuters)

ROME (CNS) — Rome’s Colosseum, long a symbol of the persecution of early Christians, was bathed in red light late Feb. 24 as a reminder of and a prayer for the thousands of Christians being persecuted for their faith today.

The family of Asia Bibi, a Christian woman sentenced to death under Pakistan’s highly criticized anti-blasphemy laws, and Rebecca Bitrus, a Nigerian Christian who was held in captivity for two years by Boko Haram terrorists, told their stories before the red lights were shined on the Colosseum.

Bitrus and Bibi’s husband and daughter had met earlier in the day with Pope Francis at the Vatican. They were accompanied by leaders of Aid to the Church in Need, a Catholic foundation that has a long history of assisting persecuted Christians.

Alessandro Monteduro, director of the Italian section of Aid to the Church, said the 40-minute meeting with Pope Francis was “extraordinary,” particularly because the entire encounter took place in an atmosphere of prayer by the pope and by his guests.

The pope “wanted everyone to pray together in their own languages,” he said. So Eisham, Asia Bibi’s youngest daughter, prayed in Urdu and Bitrus prayed in Hausa.

“It was a moment of extraordinarily intense emotion,” Monteduro said.

Eisham had visited her mother in prison Feb. 17 and told her about the trip to Rome, he said. Asia Bibi told her, “If you meet the pope, give him a kiss from me.” And the young woman did.

Monteduro said the pope told those present that Bitrus and Asia Bibi are “marvelous women martyrs, examples for a civilization that is afraid of suffering.”

Cardinal Pietro Parolin, Vatican secretary of state, represented Pope Francis at the service at the Colosseum, expressing his hope that by lighting up such an iconic monument, people would overcome their indifference to the plight of anyone persecuted for his or her faith.

“This evening we remember all victims of hatred,” he said, and all who suffer because of a spreading “mentality that leaves no room for others,” that tries to “suppress” those who are different, rather than integrate them.

NEXT: Pope appeals for end to inhumane fighting, evil of war in Syria