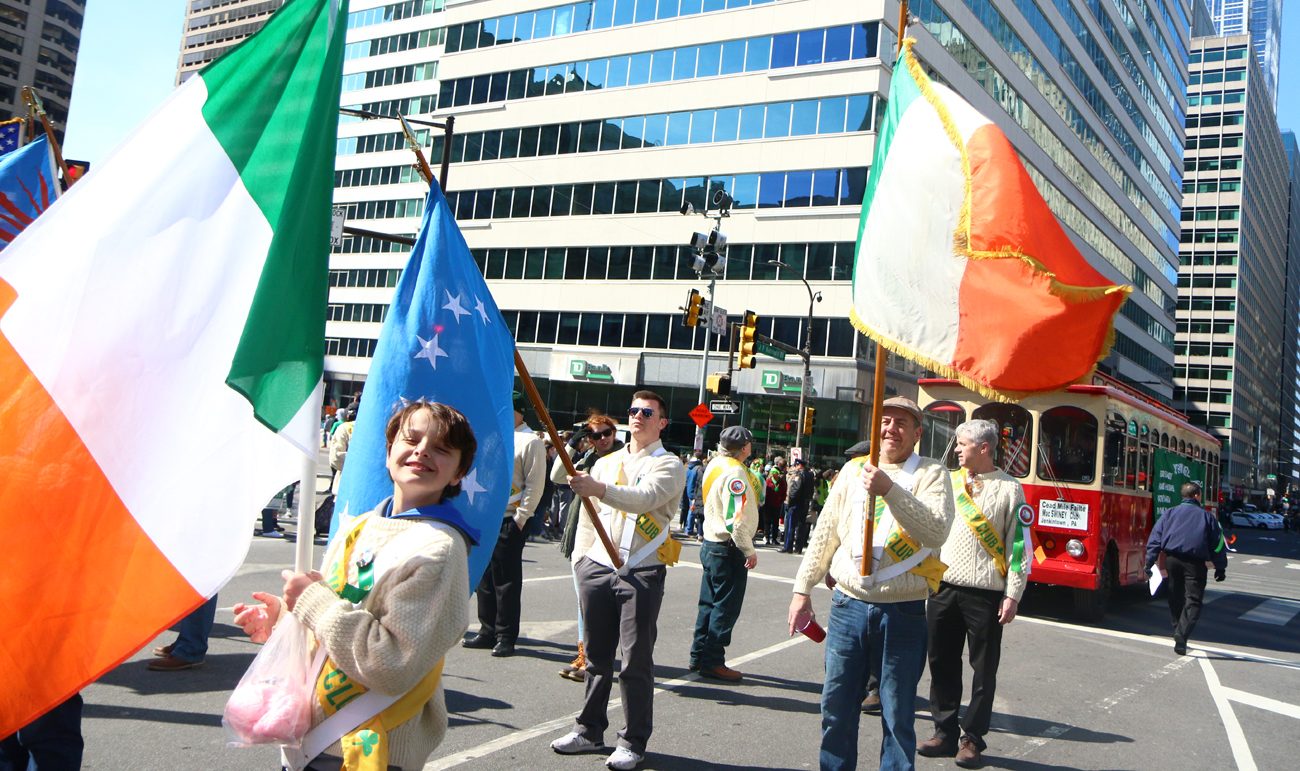 St. Patrick’s Day came early in Philadelphia this year, at least as far as the St. Patrick Day Parade was concerned. Following tradition from its founding in the mid-1950s, the parade was held March 11 on the Sunday before St. Patrick’s Day, March 17.

It was preceded by a Mass celebrated by Archbishop Charles Chaput at venerable St. Patrick’s Church near Rittenhouse Square, with Bishop Donal McKeown of Derry, Ireland, as a concelebrant along with Father Kevin Gallagher, the chaplain of the St. Patrick’s Day Observance Committee.

(See a photo gallery of the St. Patrick’s Day Mass and Parade.)

The observance of St. Patrick’s Day in Philadelphia traces back to the foundation in 1771 of the Friendly Sons of St. Patrick, a nondenominational group that was a rarity for that era. It was a union of Protestant and Catholic Irish in celebration of their common Gaelic heritage, usually with a gala banquet.

More important, they raised funds to assist poor Irish immigrants as well as support for those still living in their impoverished and oppressed homeland. 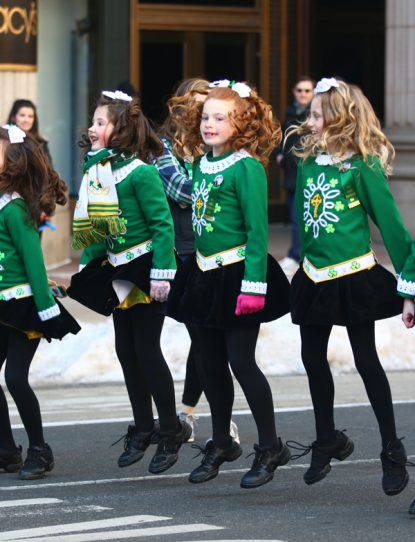 Members of the Hugh School of Irish Dance seem to float on the air as they march in the parade. (Sarah Webb)

Since then there have been many celebrations, including informal parades leading up to the city-sanctioned parade of today. The Friendly Sons of St. Patrick still exist and as a matter of fact had a contingent of 50 marching among the thousands in this year’s parade.

Surely they took pleasure in this year’s parade theme, “St. Patrick, Bless Those Who Respond to the Call of the Needy.”

In perfect synchrony with that theme was this year’s choice of Grand Marshal Sister Mary Scullion, R.S.M., Philadelphia’s best-known advocate for the poor and the homeless.

“My Mom and Dad were immigrants from Ireland and they were very involved with the Mayo Association and the Derry Association,” she said. “From the time I was little this was part of who we were. The theme is part of our DNA and we try to live up to that.”

Sister Mary could take pleasure that the Mayo Association and the Derry Society both had groups marching in the parade, as did the Sisters of Mercy and Little Flower High School from which she entered the Mercy Sisters right after graduation.

“Little Flower was the best high school in the city and maybe in the country,” Sister Mary declared.

Judge Edward Bradley, himself a former grand marshal and participant from almost the beginning of the city-sanctioned parade, can’t imagine not being part of it. “Last year was really cold, this is nice,” he said. “It’s a celebration of our Irish heritage and our gaining acceptance. It’s important to do this every year.”

Jimmy Murray, a former Philadelphia Eagles’ general manager and a founder of the Ronald McDonald House, is another long-time stalwart. “It’s my heritage. You get golden freckles when you come to this,” he said. “I even go to the parade in New York.”

Bill McCusker, a former president of Cardinal O’Hara High School, for years came down the street with the school’s marching band. Now he is content to sit in the stands.

“I’m loving it, but I do miss the kids,” he said. “Yesterday I was at the parade in Springfield. I come out of loyalty and for love of the Irish and St. Patrick.”

One striking theme among many of those reflecting on the St. Patrick’s Day celebration is that it is not so much a glorification of all things Irish as it is a celebration of the immigrants who came to America, and a remembrance of the sacrifices they made to give their children a better life. 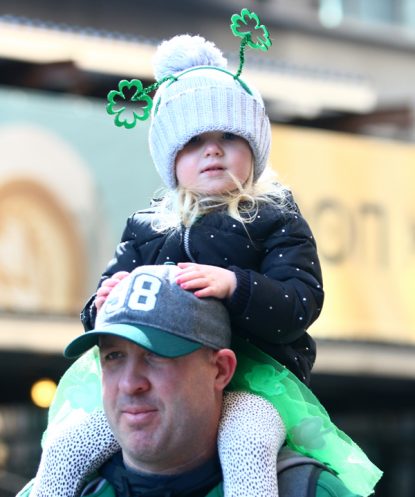 Christ the King parishioner Nick Madison carries his daughter Madison, who commands a good view of the parade, as they march with the Local 98 during the St. Patrick’s Day festivities in Philadelphia March 11. (Sarah Webb)

For example, Jason Fogg has been attending for 28 years since he was 10. Now he comes with his wife, Kim, and three young children, Marie, Jason and Brian.

“My Mom was big on this and so am I,” he said. “We are here for the ancestors who came and paved the way for us against all of the troubles they had. I’m here to represent and support them.”

But of course, many, many spectators were there to enjoy the music and support their friends and relatives marching down Market Street.

There were the kilted Emerald Society Band made up of Philadelphia police officers leading the grand parade. A total of 194 units and three hours later, the Guinness truck brought up the rear.

And what’s a parade without awards? A total of 17 were presented — for the winners see the PhiladelphiaStPatsParade.com website. 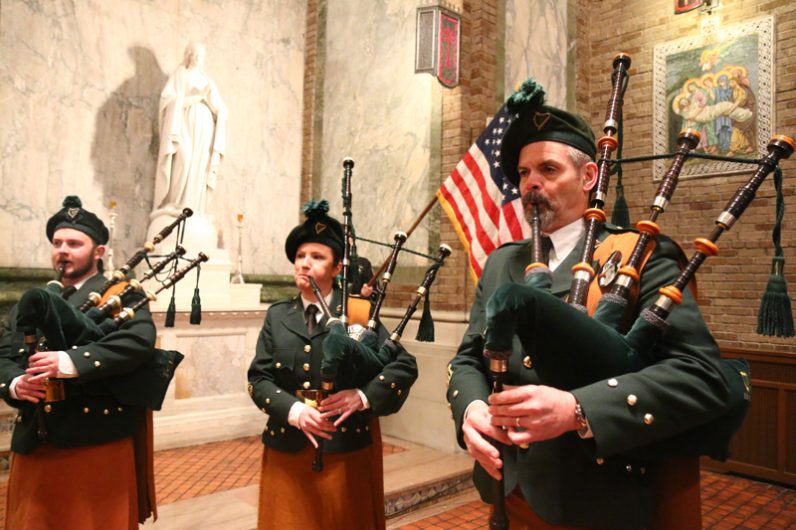 The Emerald Society Band performs a hymn before a statue of the Blessed Virgin Mary during Mass March 11 at St. Patrick Church preceding the parade. (Sarah Webb)

NEXT: Economics, care for creation topic of lecture at St. Charles Seminary