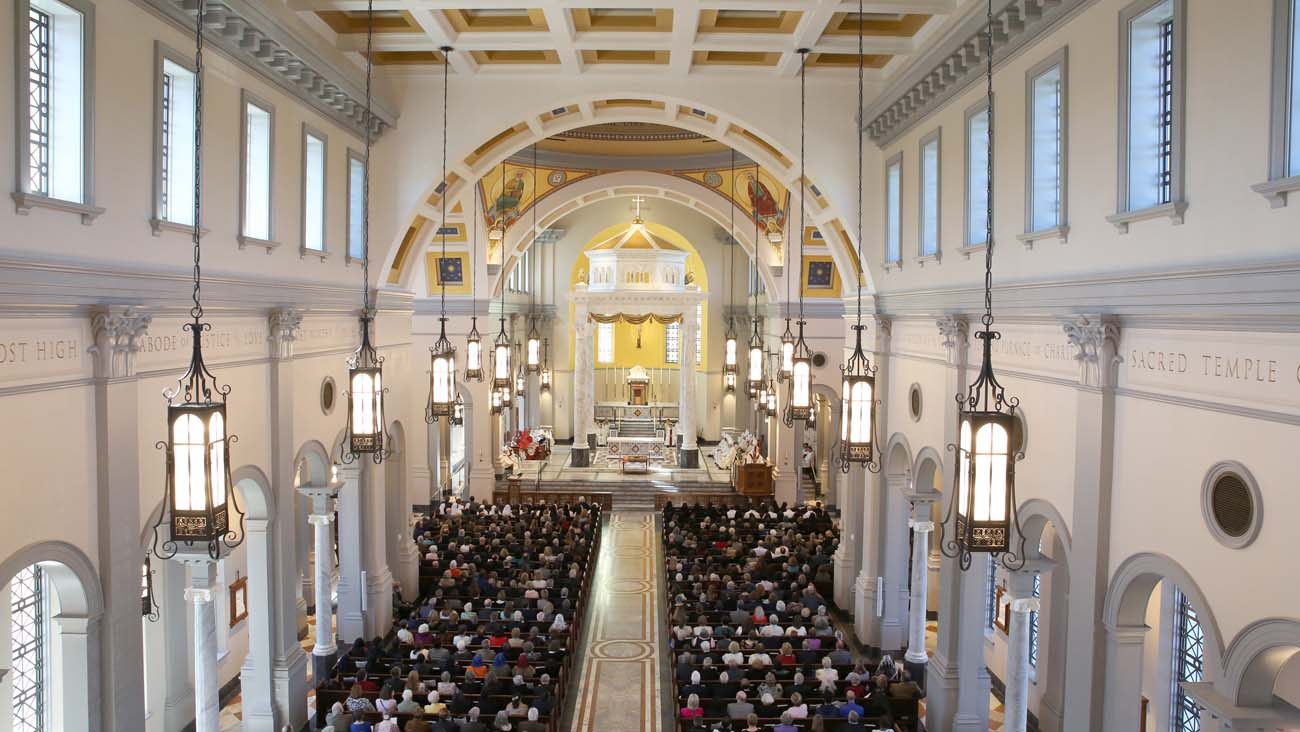 Prelates and others gather for the dedication Mass for the Cathedral of the Most Sacred Heart of Jesus March 3 in Knoxville, Tenn. Bishop Richard F. Stika of Knoxville greeted the gathering of more than 1,000 with a simple phrase after the three-year building project: "Well, we made it." (CNS photo/Stephanie Richer, courtesy Diocese of Knoxville)

KNOXVILLE, Tenn. (CNS) — The Diocese of Knoxville dedicated the country’s newest cathedral March 3 during a special Mass in which prelates and parishioners celebrated the growth of the Catholic Church in this region of the United States.

Bishop Richard F. Stika greeted the gathering of more than 1,000 with a simple phrase after the three-year building project: “Well, we made it.” 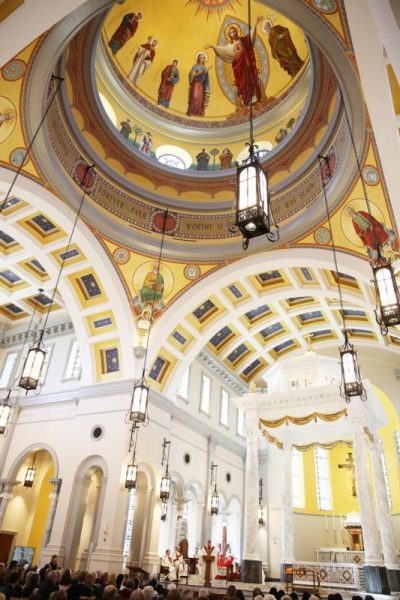 Bishop Richard F. Stika of Knoxville, Tenn., concelebrates the dedication Mass for the Cathedral of the Most Sacred Heart of Jesus March 3 in Knoxville. (CNS photo/Stephanie Richer, courtesy Diocese of Knoxville)

Five cardinals, 21 bishops, more than 100 priests, 58 deacons, and 39 men and women religious took part in the three-hour dedication Mass along with more than 800 East Tennessee Catholics.

“Isn’t it amazing what can be done with generous offerings, some buckets of paint, slabs of marble, and months of work?” Bishop Stika asked

“But in a few moments — depending on how long I preach — this building, this house, this combination of man-made materials and nature’s creation, will be a church, a home, a cathedral,” the Knoxville bishop said. “Why? Because we dedicate, we consecrate, we set apart for God this space, this sacred space, dedicated under the title the Cathedral of the Most Sacred Heart of Jesus.”

Bishop Stika issued a warm welcome to the hundreds attending the dedication Mass, calling it a historic day in the life of the Catholic Church in East Tennessee.

“Praise be Jesus Christ,” he said. “To those visiting us on this special day, welcome to East Tennessee and welcome to the Diocese of Knoxville, which comprises all of East Tennessee. Welcome to Rocky Top, a land surrounded by majestic mountains and lakes galore. Welcome to history and beauty. A warm Southern welcome to you all.”

All seven bishops in the province of Louisville, which includes the Diocese of Knoxville, attended. Louisville Archbishop Joseph E. Kurtz, the second bishop of Knoxville and Bishop Stika’s immediate predecessor, played a role in the Mass, as did Bishop James V. Johnston Jr. of Kansas City-St. Joseph, Missouri. He’s a Knoxville native.

Before the dedication, those in the congregation craned their necks for a look at the $30.8 million, 28,000-square-foot structure’s 144-foot-high dome, which has murals of the Twelve Apostles and 16 saints. A 25-foot portrait of Jesus with the sacred heart is the largest image in the dome.

The cathedral’s art and architecture also includes a 45-foot-tall baldacchino, or canopy, over the altar, as well as a marble ciborium over the tabernacle. The 11-foot-long altar itself is made of Michelangelo Statuario marble — from the same quarry as that used for Michelangelo’s “Pieta”; four pendentives at the base of the dome featuring the four Gospel writers.

“High above us we have the apostles and Mary and Joseph,” Bishop Stika said of the dome. “We have images like our family photographs that remind us that saints are those like us who knew they were sinners. We call upon their assistance as they now stand before the throne of God.”

Cardinal Dziwisz blessed a statue of St. John Paul, co-patron of the Diocese of Knoxville, at the new cathedral’s dedication. The Polish cardinal also donated two relics of the saint to the diocese, including a stole frequently worn by St. John Paul.

Archbishop Kurtz and Bishop Johnston joined Bishop Stika in blessing the people and the walls of the church with holy water.

Archbishop Pierre read the Vatican decree formally transferring the title of cathedral from the original Sacred Heart Cathedral building to the new one.

The original Sacred Heart was built as a parish church in the 1950s and seated just under 600. It served as a parish church until it was elevated to cathedral status in 1988 when St. John Paul established the Diocese of Knoxville.

Additional steps in the March 3 rite of dedication included Bishop Stika taking formal possession of the building from the architects, the depositing of relics in the altar, and the anointing of the altar and the walls of the church.

Relics in the new cathedral altar include those of a number of saints and blesseds, such as St. Andrew the Apostle, Blessed Stanley Rother, St. Teresa of Kolkata, St. Elizabeth Ann Seton and several more. Also present is a relic of the true cross of Christ, donated by Cardinal Rigali.

Bishop Stika announced plans for the new cathedral in September 2014. The original cathedral on the same site will become a parish hall.

The bishop operated a Caterpillar backhoe to break ground on the cathedral April 19, 2015.

The Diocese of Knoxville’s new mother church is the second cathedral to be dedicated in the United State in less than a year. In July, the Diocese of Raleigh, North Carolina, dedicated its Holy Name of Jesus Cathedral.

Cardinal DiNardo noted how the building of three new cathedrals in a decade illustrates the dynamic growth of the Catholic Church in the southern part of the country.

Pope Francis blessed the dedication stone for the new Cathedral of the Most Sacred Heart of Jesus Oct. 14, 2015, during a papal audience at the Vatican attended by Bishop Stika and Cardinal Rigali. Construction progressed until the final week before the dedication.

March 3 was “a magnificent day in the history of the local church. The cathedral in our tradition plays an important role not only for the celebration of the sacraments and divine worship; it’s a sign and a symbol of the Church’s unity,” Bishop Johnston said. “This is a beautiful representation of that. It’s a magnificent building, and it’s going to help the local Church give glory to God for many centuries to come.”

NEXT: For some, sitting back in the face of violence just won’t do