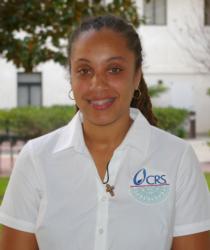 SAN DIEGO (CNS) — When Cassandra Bissainthe left Haiti for the United States some 17 years ago, it seemed unlikely that she would ever return.

Political instability and economic insecurity were rampant in her homeland, and extreme poverty had driven desperate people to do terrible things.

Shortly after her relocation to Miami, Bissainthe discovered that she had been in danger of being kidnapped. Around that same time, her aunt actually was kidnapped and held for a week until the family paid a ransom.

“I never thought I would go back,” Bissainthe, now 33, said during a visit to the Diocese of San Diego earlier this year.

Today, she is stationed in Haiti with Catholic Relief Services, the U.S. church’s overseas relief and development agency. She is the agency’s church partnership and capacity strengthening manager.

In the aftermath of the 7.0-magnitude earthquake that struck Haiti in early 2010, she reflected on what she could do to help the suffering people of her homeland. She began working in Haiti for Trocaire, the international development agency of the Catholic Church in Ireland, and then in 2015 joined the staff of CRS, the organization’s U.S. counterpart.

Bissainthe holds a bachelor’s degree in international relations from Florida International University. She was drawn to development work both by the example of her mother, who had worked for the U.N. Development Program, and by her experience at her all-girls Catholic high school in Haiti, where community service requirements awakened within her a desire to work for a mission-driven organization.

In Haiti with CRS, Bissainthe has her work cut out for her. The country is ranked as the poorest in the Western hemisphere, with some 80 percent of the population subsisting on less than $2 a day. In addition to an unstable economy and political climate, Haiti also is still recovering from the damage caused by the 2010 earthquake, coupled with the devastation of Hurricane Matthew, which impacted more than 2 million people in late 2016.

“I like to be in the field,” said Bissainthe, who added that her co-workers will confirm that she is rarely found behind her office desk. But, she said, “in the field, you get to meet people that have nothing, so those situations can (bring) you down.”

Encountering people who are struggling amid poverty and natural disasters can be challenging, but in those moments, she relies on her Catholic faith, which inspires her “to look for the positive.” Past experiences of CRS’ life-changing work have given her reason for this hope, she told The Southern Cross, San Diego’s diocesan newspaper.

She has seen, in villages where most of the youth used to drop out of school by the sixth grade, an increasing number asking for high school recommendations. After major disasters, she has encountered people whose entire livelihoods have been wiped out; yet, several months later, she has witnessed them rebuilding their lives with whatever support CRS was able to offer them.

A key component of CRS’ approach to development and a reason for its success is its collaboration with local partners in the various regions in which it serves.

CRS only has three offices in Haiti, Bissainthe said, and it’s only because of community partners that the organization is able to assist as many people as it does. Those partners continue to be key players in the community, even after CRS pulls up stakes and leaves the region, carrying on the programs that CRS put in place.

Bissainthe’s job places her at the center of cultivating relationships with these partners, particularly the local Catholic Church, from the national to the parish level.

“It’s truly crucial that we maintain a strong relationship with the church, because they are our eyes and our knowledge of the field,” she said, adding, “They know these communities … and they might know the needs better than (we do).”

Bissainthe visited San Diego in late January as part of a two-week U.S. tour to promote CRS Rice Bowl, a Lenten faith-in-action program that encourages U.S. Catholics to show solidarity with the poor through prayer, fasting and almsgiving.

Some 75 percent of the funds raised through CRS Rice Bowl support the organization’s programs around the world, including agriculture, water and sanitation, microfinance and education projects. The remaining 25 percent benefits the poor and hungry in the communities where those funds were raised.

Just as she enjoys meeting the people CRS serves in Haiti, Bissainthe said she is grateful for the opportunity to meet the U.S.-based donors whose generosity makes CRS’ work possible. During her recent tour, she was able to hear their stories while also sharing her own.

“I think it makes you even more humble about the work that you do,” she said of her experience on the tour, “and also see the value in what we do.”

NEXT: Youth synod delegate sees relationships as critical for ministry