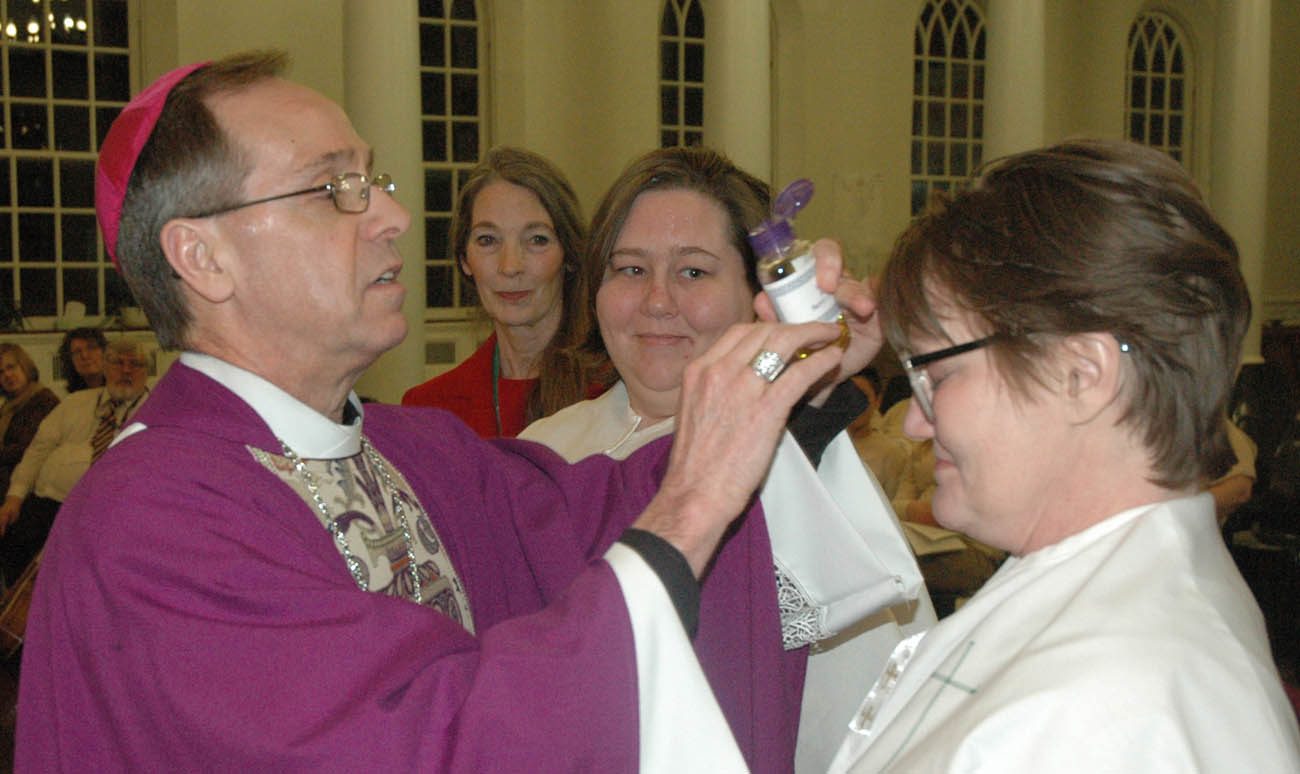 Archbishop Charles C. Thompson of Indianapolis prepares to make the sign of the cross with sacred chrism oil on the forehead of Marguerite Engle during a March 4 Mass at the Indiana Women's Prison chapel. Engle and Opal Williams, third from left, received the sacraments of baptism, confirmation and the Eucharist during the Mass. (CNS photo/John Shaughnessy, The Criterion)

INDIANAPOLIS (CNS) — There are times when nearly everyone seeks redemption for a mistake or a moment of darkness, times that can help find a way to return to the grace of God.

For Opal Williams and Marguerite Engle, a significant step in that journey occurred the evening of March 4 in the chapel of the Indiana Women’s Prison in Indianapolis.

There, Indianapolis Archbishop Charles C. Thompson baptized and confirmed the two inmates and later gave them their first Communion as he celebrated Mass and their new life in Christ.

Archbishop Thompson focused on that new life during his homily. He shared with the two women and their fellow inmates the message that Pope Francis once delivered during a visit with prisoners in Bolivia.

“When Jesus becomes part of our lives, we can no longer remain imprisoned by our past,” he said, quoting the pope. “Instead, we begin to look to the present, and we see it differently, with a different kind of hope. We begin to see ourselves and our lives in a different light. We are no longer stuck in the past, but capable of shedding tears and finding in them the strength to make a new start.”

Turning to Williams and Engle, Archbishop Thompson told them, “So that’s what Lent is all about: the strength to make a new start. It’s a new beginning, celebrating our identity in Christ as God’s children, as God’s family.

“And we celebrate that today in a special way as you are received into the family of the Catholic Church, walking in this new light, this new hope, this new joy of putting on Christ and knowing Christ.”

For both women, their new beginning was marked with emotion, from flashing glowing smiles to wiping away tears of joy, all with the belief that they had finally found a home in the church that God had always intended for them.

“This means a lot to me,” Williams said before Mass. “I was adopted, but my biological grandmother was Catholic, and I remember going to church with her. I feel in my heart that I’ve been meant to be Catholic, and I’m following in her footsteps. I feel like this is what God and her really wanted me to do.”

Engle shared a similar conviction of being at home in the church.

“I’ve always turned to the Catholic Church when there was trouble in my life and I needed answers,” she said. “I’ve fasted and prayed. I wanted to learn as much as I could before I made a decision to become part of the church.

“Believing in God and Jesus Christ brings me closer to heaven. It’s my salvation. It means I’ll be saved. It means I’ll be released from everything I’ve experienced so far. I have forgiveness for my sins. I will have a future.”

Such a journey toward the future comes with the help of Indianapolis-area Catholics who volunteer in prison ministry weekly at the women’s facility.

“When they learned they were able to come into the church, they were overjoyed,” Tully told The Criterion, newspaper of the Indianapolis Archdiocese. “They’ve been working hard and studying hard. It’s an amazing journey for them. Everything is new and beautiful to them. They really have embraced the Catholic tradition and faith.”

At times during the evening, the smiles of Engle and Williams were matched by Wolsifer, who led the two women through the Rite of Christian Initiation of Adults to enter the church.

“This means everything to them,” Wolsifer said. “They’ve been wanting to come into the church since they started RCIA. And they’re interested in ongoing learning about the Catholic faith.”

After the Mass, Archbishop Thompson reflected on the joy and the faith of Engle and Williams he witnessed during the rituals and reception of the sacraments.

“The fact that these two ladies want to be received into the church tonight shows the faith is alive here,” he said. “Their own journey, their own challenges — whatever things in their life have caused them to be here — they have not lost faith, they have not lost their sense of being created in the image of God and being loved by God.”

The archbishop spent considerable time after Mass answering questions from other inmates. He also spoke with them informally in groups and individually, consoling and blessing one woman who shared a painful reality with him.

“These are the ones that Pope Francis reminds us are on the margins, on the peripheries, that society tends to want to brush aside or forget,” said the archbishop, who has made personal visits and prison ministry a priority during his time in Indiana. “We have to remember that Christ is present here, and remember the goodness and dignity of every person.”