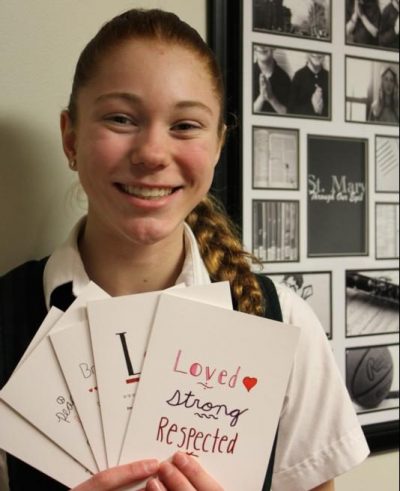 Olivia Oyster, an eighth-grader at St. Mary School in Delaware, Ohio, holds letters of support to birth mothers of adopted children that she and her classmates wrote. (CNS photo/courtesy St. Mary School)

COLUMBUS, Ohio (CNS) — A suggestion that started with an Ohio Catholic school student’s dream has resulted in a nationwide response of support for the birth mothers of adopted children and gratitude from the mothers themselves.

The student, Olivia Oyster, is an eighth-grader at St. Mary School in Delaware. She is the oldest of three sisters — one of whom, 3-year-old Gianna, was adopted by Olivia’s parents, Greg and Stacy Oyster, after a local woman gave birth to the child.

“One night in early November, I dreamed that I was in school proofreading a bunch of letters that kids at school had written to birth mothers thanking them for the courage it took to make the decision to allow their child to be adopted,” Olivia told the Catholic Times, newspaper of the Columbus Diocese.

“From our own experience with Gianna, I realize it takes great strength to do this,” she explained. “I know that birth mothers go through a lot that most people don’t realize and deserve active support and the gratitude and reassurance that they did what was best for the child. This dream happened a couple of times and I wasn’t sure what to do about it, so I talked to my mother.”

“I said it was probably God asking her, and it was her choice whether or not to obey what he was asking,” Stacy Oyster said. “She took it upon herself to do the rest, and it’s amazing what has happened. It surely was a message from God, and Olivia’s making the right choice has resulted in lots of blessings.”

Olivia was familiar with an organization known as BraveLove, which her mother had been following on social media.

BraveLove, a Dallas-based nonprofit organization founded six years ago by an adoptive mother, is not an adoption agency or a pregnancy resource center, but is primarily dedicated to advocating through media content and messaging that adoption is a loving option for those in unplanned pregnancies.

“I emailed BraveLove about my dream on Nov. 21,” Olivia said. “They emailed back the next day saying that having my classmates write letters to birth mothers was a great idea, and encouraged me to get in touch with my principal, Mrs. (Gina) Stull, about it. I emailed her the next day and she gave her permission for me to do this.”

It was decided Olivia would talk to the seventh- and eighth-grade classes at the school Dec. 11 and 12, show them a video from BraveLove, then ask them to write the letters.

She worked with teacher Reilly Polletta on wording that everyone would use and “would be most meaningful” to the mothers, Olivia said.

Polletta said she was thrilled to be involved because her youngest brother is adopted.

“That made it extremely meaningful for me,” she said. “I have so much respect for the way Olivia took action. It’s amazing, both on a personal level for her and on how she educated her classmates. All of us have learned more about adoption and gained so much insight about the birth mothers of adopted children and feel tremendous gratitude for them.”

More than 50 letters were written and sent in a package to BraveLove just before the school’s Christmas break.

“Dear Birthmother, I want to begin my expressing my absolute gratitude for you and your brave decision. Adoption is a topic that is very close to my heart, because my little sister was adopted. You are so brave, and selfless. I am praying for you! — Olivia.”

Another said: “Dear Birthparent, The most important thing for you to know is that you absolutely made the right decision by making an adoption plan for your child. No matter what anyone says, you did not give up or take an easy way out, you thought from the bottom of your heart about how to give your child the best possible life. Always know you are supported and loved, even if just by me. Sincerely, Adoption Supporter.”

BraveLove received the letters Dec. 27, photocopied them, and mailed them Jan. 3 to 260 birth mothers across the nation, who quickly responded to the messages of support. Here are some of the responses:

“This is one of the most loving, unexpected surprises I have ever received in the mail. Thank you, Olivia, for your beautiful heart and for loving on birth mothers! What a sweet, sweet reminder from BraveLove.”

“Just the little oomph of happiness I needed. Thank you to the dear girl who wrote me. And thank you @joinbravelove for including me.”

“As a birth mom, I received one of these letters. Honestly, it came at the perfect time. On the 15th my birth son will be one, and it’s been a struggle for me. But when this letter came in the mail, it was so wonderful and just made my whole week! Truly appreciated it. Thank you!!!”

Later in January, BraveLove decided to feature several of the letters from Olivia and her classmates on a set of greeting cards it offered for sale as a Valentine’s Day promotion, which continue to be available on the website www.bravelove.org.

Each card features one of the letters, plus space for the sender to add words of encouragement for the recipient. Olivia’s letter also is featured in an ongoing campaign which encourages people to send messages of encouragement on the BraveLove website so they can be seen by birth mothers and others viewing the site.

BraveLove executive director Laura Bruder said the letters reached not only the birth mothers who were their intended recipients, but more than 20,000 people on Facebook alone. Olivia said she has been periodically receiving postings of 10 to 15 responses from BraveLove for the past two months.

“Not every day do I receive emails from eighth-graders. So when Olivia’s message popped in my inbox, I knew this was going to be special,” Bruder said. “Since then, I’ve continued to be amazed by the impact this simple act of kindness has had on birth mothers and families nationwide. It’s Olivia, the parents, her classmates, the teachers and principal who have together made this beautiful effort possible.”

Principal Stull called the students’ outreach “the epitome of what Catholic education is about.”

“You couldn’t find a better way of teaching children about caring for others and respecting every human life,” she said. “It’s a great example of how doing small things with great love can make a huge difference.”

Information about BraveLove can be found at www.bravelove.org. Follow the organization (@joinbravelove) on Facebook and Instagram. To add your voice to Olivia’s efforts supporting birth mothers, go to www.bravelove.org/Olivia.

NEXT: To honor Rev. King, ‘deepen’ commitment to work for justice, bishops urge