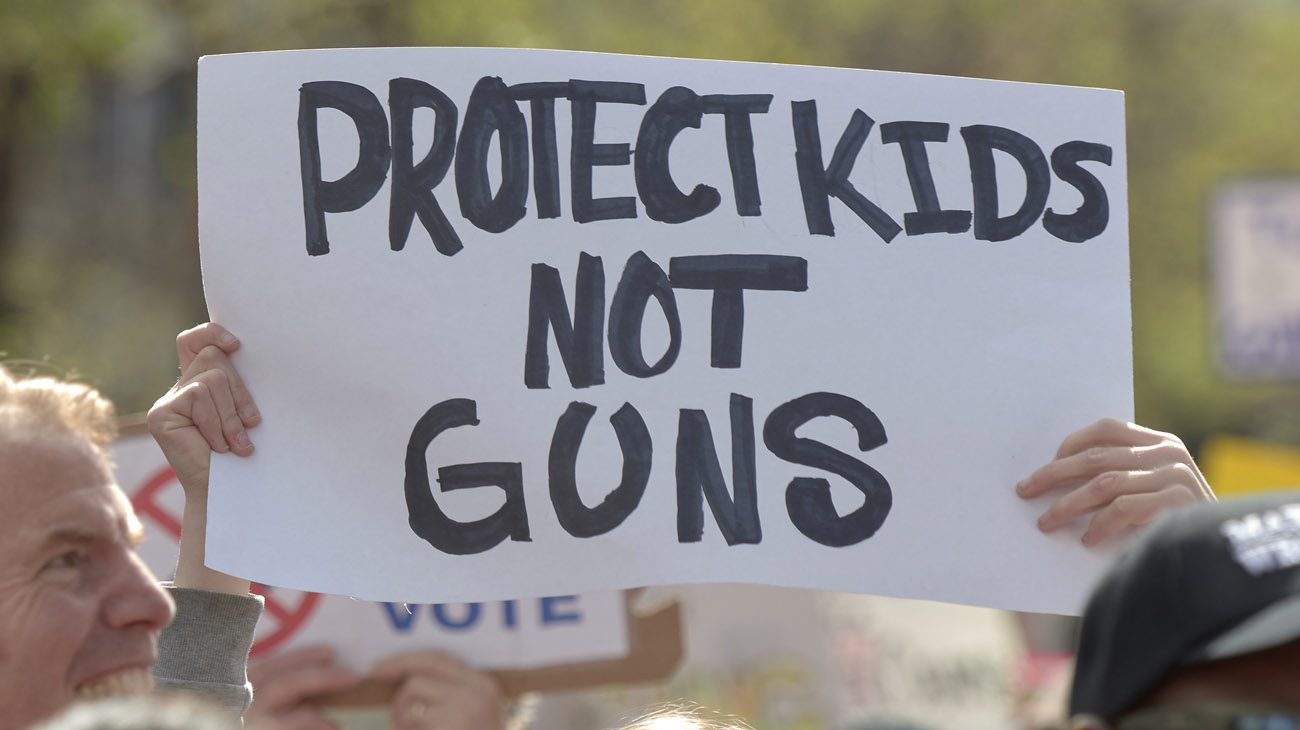 UPDATED – WASHINGTON (CNS) — When Eileen Dinn heard about the recent school shooting at Great Mills High School in southern Maryland March 20, she was sitting in school at the Academy of the Holy Cross in Kensington, Maryland, and her first thought was “not again.”

The church is just a few blocks away from where hundreds of thousands of people gathered midday for the March for Our Lives organized by students from Marjory Stoneman Douglas High School in Parkland, Florida, after the shooting that killed 17 people Feb. 14. Fifteen students, an assistant coach and the school’s athletic director died that day. Several more were injured.

“Though there is nothing we can do to bring the teachers and the students back … at least we can honor their legacy by not allowing the tragedy to be repeated,” said Dinn.

For some students, the issue of gun violence is even more than a frightening possibility — it is a reality that they have already seen up close.

Deondre Chase, a student at Archbishop Carroll High School in Washington, was just 11 years old when he was playing in a basketball game in his neighborhood and someone pulled out a gun.

“I remember that day every day of my life,” he said.

That experience has made him look at everything with a different perspective. “Every day, I talk to God, and I say to him, ‘Thank you for letting me live another day,'” he said.

He joined the other students in calling for government leaders to take action against gun violence with stricter gun laws.

“As teenagers, I feel like we have a unique voice,” said Amy Rivera, a junior at Elizabeth Seton High School in Bladensburg, Maryland. “People underestimate us a lot.”

After the Mass, the Catholic teenagers joined people of all backgrounds walking to Pennsylvania Avenue to make their voices heard.

Some joined in behind a group of about 900 people from the Reform Jewish Movement, who were coming from their service held prior to the march. Many of them were holding signs with Leviticus 19:16 on them, which read: “Do not stand idly by while your neighbor’s blood is shed.”

“It has become much more personal than your neighbor,” said Hanna Carr, a sophomore at Tufts University in Boston, who was with several of her friends from the North American Federation of Temple Youth. “It is our teachers, friends, peers, and siblings” who are victims of gun violence.

Several teenagers from Minneapolis in the group were wearing shirts that said “#Dayenu,” which means “Enough” in Hebrew. One of those teenagers said she felt it was worth the trip across the country, saying “there is power in numbers.”

The March for Our Lives rally opened with Andra Day singing her song “Rise Up,” joined by Baltimore’s Cardinal Shehan School choir, whose rendition of the song became a viral YouTube video in 2017. Throughout the rest of the event, young people spoke about how gun violence has affected them.

Seventeen year-old Cameron Kasky, a student at Stoneman Douglas who was one of the main organizers of the march, said his generation has “spent our entire lives seeing mass shooting after mass shooting” and is going to “fix the broken system we have been forced into and create a better world for the generation that is to come.”

He read the names of all 17 of the victims of the deadly shooting at his high school, noting that it would have been one of their birthdays that day.

“Their families endured great pain,” he said. “Lots of young people — my classmates — were forced to become adults.”

But even after all he experienced he remains optimistic.

“For the first time in a long time, I look forward 10 years and I feel hope. I see light,” said Kasky. “Today is the beginning of a bright new future for this country.”

As hundreds of thousands marched in the nation’s capital, “sibling” marches in cities across the country also drew large crowds against gun violence and for a reform of gun laws. In Salt Lake City, more than 8,000 people of all ages, cultures, ethnicities and religions marched from West High School to the Utah Capitol as one voice.

In the crowd were families with babies; students from high schools, middle schools and elementary schools; educators; young adults and the elderly.

As the people walked through the streets of Salt Lake City, chants of “Thoughts and prayers are not enough,” and “Not one more,” among others, could be heard from blocks away.

At the Capitol, one of the march’s student organizers, Sophia Davis of Judge Memorial Catholic High School, opened the program with an acoustic rendition of “Imagine” by John Lennon, as people made peace signs with their hands.

“Students are no longer accepting just thoughts and prayers, only policy and action,” declared Abena Bakenra, a West High School senior. For Patricia Wheeler, the mother of three boys ages 5 to 11 months, participating in the march was a priority.

“I knew it was not going to be an easy task with my three little ones, but I wanted to be present because this is such an important issue,” she told the Intermountain Catholic, newspaper of the Salt Lake City Diocese. “We need to protect our children and schools need to be a safe place for them.”