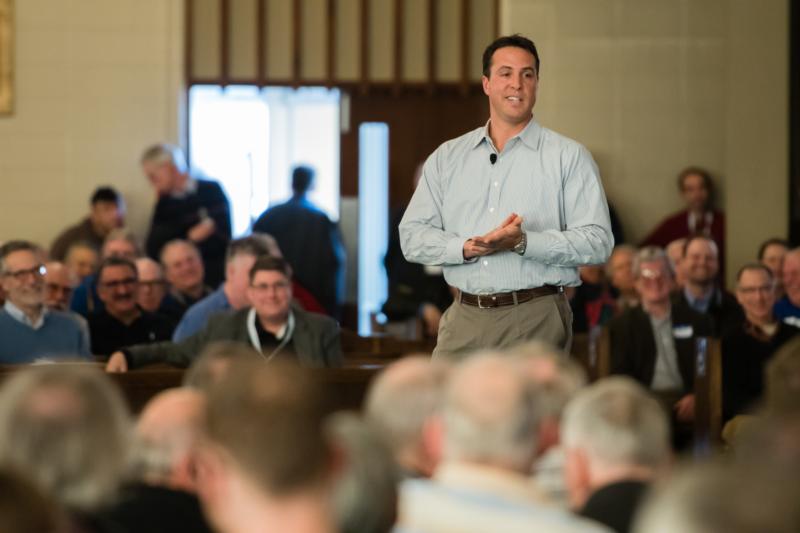 LINTHICUM, Md. (CNS) — Their lives could not have started more differently.

At age 7, Wesley Baker was shining shoes on Baltimore’s notorious Block. The troubled youth, conceived when his mother was raped at age 12 or 13, fell victim to child sex abuse and suffered a drug overdose before he reached adolescence.

Convicted in the 1991 murder of a 49-year-old teacher’s aide, in 2005 he became the last man executed in Maryland before lawmakers abolished the death penalty.

Part of a loving Severna Park family that nurtured his Catholic faith, he became a varsity standout at Mount St. Joseph High School in Irvington, the Georgia Institute of Technology and then a star for the Texas Rangers, Atlanta Braves, Los Angeles Angels and New York Yankees. After playing on three All-Star teams, the five-time Gold Glove winner retired in 2016 and now is a broadcaster for ESPN.

Father Charles Canterna, the Baltimore prison chaplain who ministered to Baker on death row and who is Teixeira’s uncle, believes God’s grace touched the lives of both men in profound ways.

Speaking at the March 10 Catholic Men’s Fellowship Conference, held at St. Philip Neri in Linthicum and simulcast via a live video feed to a satellite location at St. Mary Magdalen in Bel Air, Father Canterna emphasized that all lives have value and that those in prison are no different from those on the outside.

Father Canterna remembered that Baker, knowing execution was imminent, contacted him about deepening his relationship with God. The priest, who is in residence at St. Vincent de Paul Parish not far from the Baltimore projects where Baker grew up, began praying regularly with the convicted murderer and encouraged him to read the Bible. 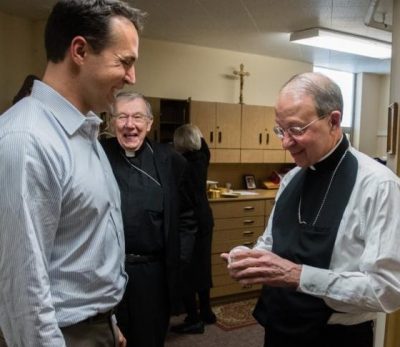 One week before the execution, Cardinal William H. Keeler, then head of the Baltimore Archdiocese, visited Baker on death row and simply read “the bread of life discourse” from the Gospel of John.

The priest thought it was an odd selection because Baker was not Catholic and Catholics frequently cite the discourse as part of the basis for belief in the Eucharist.

Near the end of the reading, Cardinal Keeler recited the words of Jesus proclaiming himself the living bread of heaven — the bread that provides eternal life for those who eat it.

“The eyes of that prisoner were so wide,” Father Canterna recalled. “This guy was just mesmerized. He said, ‘I want that bread.'”

The priest later heard Baker’s nearly six-hour confession and asked the Methodist if he truly understood what the Eucharist is.

“When that old man was reading the Bible to me, I saw his eyes,” Baker told Father Canterna, referring to Cardinal Keeler. “He was holy. I want it.”

Baker received his first Communion and was welcomed into the Catholic Church. On the night of his execution, Dec. 5, 2005, as a lethal cocktail of three drugs flowed through his veins, Baker prayed to Mary that his soul be taken to Christ.

“It doesn’t matter how your life began,” Father Canterna told 750 conference attendees at St. Philip and another 80 watching at the satellite location. “It’s how it ends that matters.”

Teixeira, who embraced his uncle before addressing conference participants, encouraged his audience to recognize that God is with them at all times.

Throughout his career, he said, he always tried to “play up a level” — competing in baseball with college freshmen when he was a freshman at Mount St. Joseph and seeking veteran superstars’ advice when he was a rookie in the majors.

“To me, that is such a parallel to our Christian lives,” Teixeira said. “God is calling us to search out people who will make us better. Guys who don’t challenge us are easy to be around.”

The father of three, who now lives in Greenwich, Connecticut, and worships at St. Michael the Archangel Church, warned against putting God in a box. Each person has a responsibility to uncover his or her God-given talent and then share it with the world, he said.

In several presentations, Father Donald Calloway, a member of the Congregation of Marian Fathers of the Immaculate Conception and a convert to Catholicism, addressed the theme of the conference, “Hail, Holy Queen: Knighted by Mary.”

The priest, who is the author of several books, said Mary provides the spiritual support men need to live out their Christian lives. The rosary is an especially powerful weapon for combating evil in the world, he said.

“Are you unsheathing this sword?” he said, lifting a rosary into the air. “You will be a phenomenal father and husband if your family sees you on your knees praying this.”

Mary is calling on men to “step up,” Father Calloway said.

“Are you listening?” he asked. “Are you manning up to this challenge or dorking around?”

During the conference, Frank Ristaino, a retired U.S. Army sergeant major and a parishioner of St. Mary in Annapolis, distributed “Ranger Rosaries.” Made of military parachute cord, he developed the idea for the special prayer beads during military training in the Maryland Army National Guard.

Parishes throughout the archdiocese and around the country make the rosaries for distribution to members of the armed forces around the world. In 2014, the Annapolis-based Ranger Rosary Network surpassed the distribution of 1 million rosaries.

In his homily during an afternoon Mass at the conference, Baltimore Archbishop William E. Lori held up Roberto Clemente as a model of how to lead a humble life of virtue. The Hall of Fame outfielder for the Pittsburgh Pirates always credited God for his success on and off the field, Archbishop Lori said.

Clemente died in a plane crash in 1972 while delivering relief supplies to Nicaragua following a devastating earthquake.

“This is a pretty good thing for us to think about as Lent winds down,” Archbishop Lori said, “to give God the credit, the thanks, the praise, the adoration, by spending time in prayer, by attending Mass devoutly and, whenever possible, eucharistic adoration.”

The archbishop encouraged the men to receive the sacrament of reconciliation and to ask God for the “grace of a humble and contrite heart.”

Throughout the conference, long lines formed for the sacrament of reconciliation.