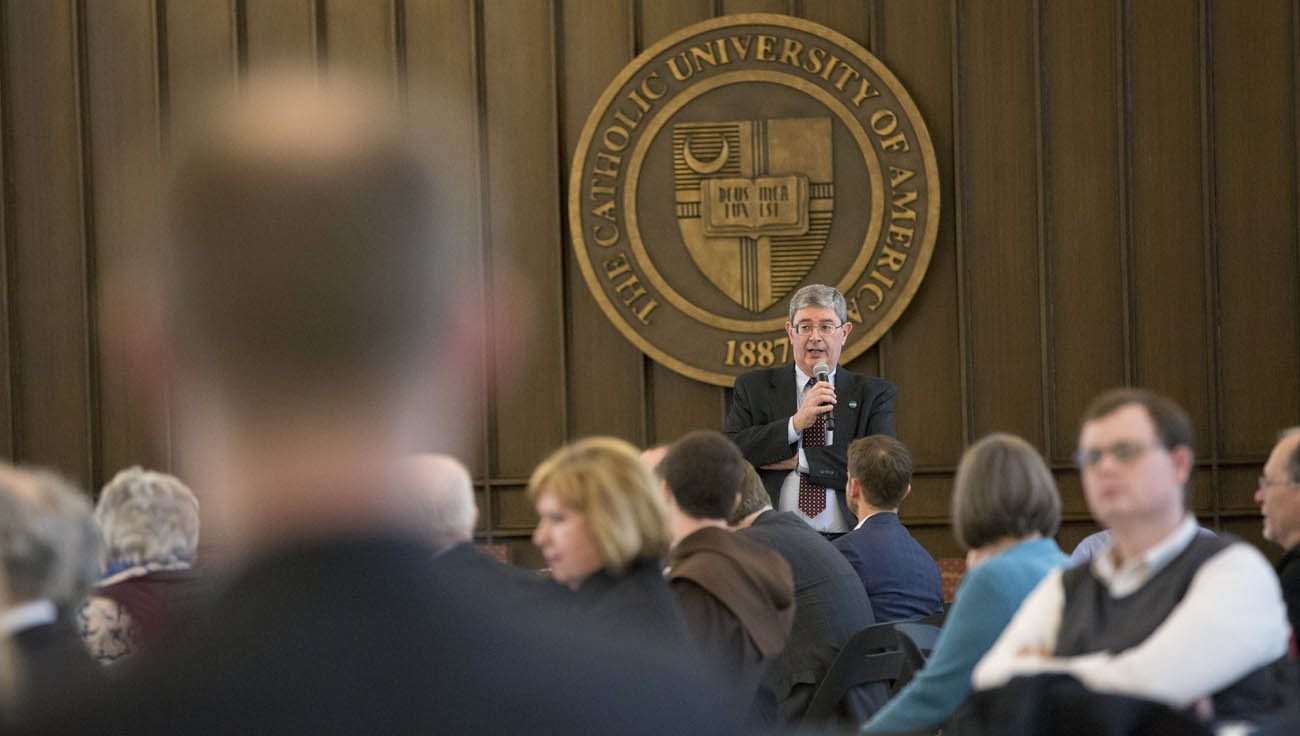 George Weigel, senior fellow at the Ethics and Public Policy Center, speaks at The Catholic University of America in Washington during a March 7 symposium celebrating the life and work of Father Richard John Neuhaus. The symposium celebrated the cataloging of nearly 100 boxes of Father Neuhaus' papers, donated to the university's American Catholic History Research Center and University Archives. (CNS photo/Jaclyn Lippelmann, Catholic Standard)

WASHINGTON (CNS) — Father Richard John Neuhaus, founder of the Institute for Religion and Public Life and its magazine, First Things, was dedicated to ecumenical dialogue and believed in the importance of religion in the public square, said speakers at a March 7 symposium in Washington.

The symposium was held at The Catholic University of America in Washington to celebrate the completion of the cataloging of nearly 100 boxes of papers by Father Neuhaus donated to the school’s American Catholic History Research Center and University Archives.

The papers include his correspondences, publications, photographs and personal items. They were donated by the ecumenical Community of Christ in the City, where Father Neuhaus formerly lived.

Father Neuhaus, who died in 2009, was first ordained as a Lutheran minister, but in 1990 he joined the Catholic Church and later was ordained a priest.

Becoming a Catholic “did seem to answer to something very deep in him,” said one of the speakers, Gil Meilaender, a professor of theology at Valparaiso University in Indiana.

He noted that he believed the Supreme Court’s 1973 Roe v. Wade ruling legalizing abortion on demand was the 20th-century corollary to the court’s infamous 1857 decision denying the citizenship rights of Dred Scott, an enslaved man who sued for his freedom, because both decisions, Weigel said, found that “some people don’t count.”

Until then, “the American story had been one of an expanding circle of concern and compassion,” said Weigel, adding that because of Roe v. Wade, “that circle is radically narrowed.”

Father Neuhaus began to feel alienated from the political left around this time, and gradually shifted to find his place in the political right, later serving as an unofficial adviser to President George W. Bush on social matters.

Through everything that Father Neuhaus did, “his primary orientation was the church. … All of his other activities came out of his service at the altar,” said Robert Wilken, an author at First Things.

Rusty Reno, editor of First Things, noted how though he was considered a prominent public intellectual, Father Neuhaus was not “a creature of the university.” Wilken echoed that point when he noted that Father Neuhaus entered the seminary immediately after high school and never earned a doctorate.

Meilaender recalled how Father Neuhaus would gather 12 to 15 people together to discuss different papers, and was skilled at finding people who would make good conversation partners.

“It was a reaffirmation of the fact that I wasn’t as alone out there as it seemed,” said Meilaender.

These discussion groups were a manifestation of Father Neuhaus’ lifelong commitment to liberalism, which Matthew Rose, director and senior fellow at the Berkeley Institute, said was “a way of thinking about and engaging in” politics.

In this model, people would share ideas and disagreements about what they all agreed was “most important and true,” said Rose, who later added: “Disagreement was not over the existence of truth, but how it is lived out in the public square.”

Rose said there is “an intrinsic relationship between belief in the truth and in tolerance” of other viewpoints, because “assent to the truth must be done freely. … It cannot be coerced.”

According to Father Neuhaus, “the true enemy of liberalism wasn’t strongly held or strongly voiced opinions about the truth, but rather their absence or suppression,” said Rose.

Father Neuhaus brought evangelicals and Catholics together around a range of issues, and in 2005, Time magazine named him one of 25 most influential evangelicals in America, despite his being Catholic.

Father Neuhaus was well known for his opinion that religion needed to play an important role in American democracy, and Meilaender explained that this belief came from his view that politics is a function of culture, and at the heart of culture is religion.

Though originally from Canada, Father Neuhaus came to love America, and the last book that he wrote was titled American Babylon.

Quoting Father Neuhaus, Rose said, “Yes, America is Babylon, but it is our Babylon. It is the time and place God has given to us.”

NEXT: Winner of peace award buoyed by activism of Parkland students