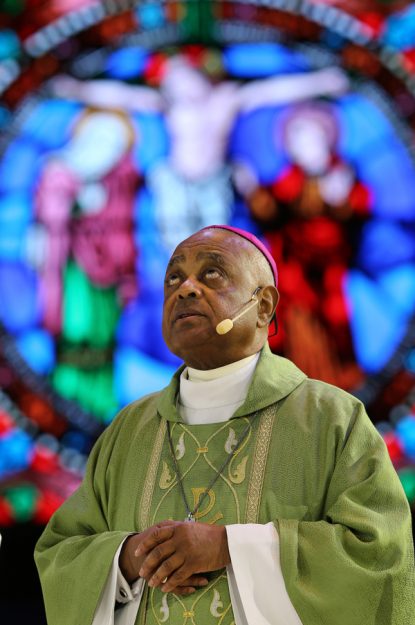 Archbishop Wilton D. Gregory of Atlanta, pictured in 2017, said a legislative proposal called the Hidden Predator Act, or H.B. 605, is unfair to the Catholic Church and would be catastrophic to the church’s mission. Georgia lawmakers are considering waiving the statutes of limitations for filing civil lawsuits over abuse of young people against nonprofits and businesses, but not government agencies or public schools. (CNS photo/Bob Roller)

ATLANTA (CNS) — Georgia lawmakers are considering waiving the statutes of limitations on civil lawsuits claiming sexual abuse of young people against nonprofits and businesses, but not government agencies or public schools.

Archbishop Wilton D. Gregory of Atlanta said the bill called the Hidden Predator Act, or H.B. 605, is unfair to the Catholic Church and would be catastrophic to the church’s mission. Many of the cases of alleged abuse could go as far back as the 1940s.

“I write to inform you of an extraordinarily unfair bill currently pending in our state legislature,” he said in a March 9 statement. “If passed, H.B. 605 could drastically damage our ability to carry out the mission of our Catholic Church in the state of Georgia.”

Sponsored by Republican Rep. Jason Spencer, the bill was approved Feb. 28 by the Georgia General Assembly’s House of Representatives and sent to the state Senate for consideration.

“We have always fully supported criminal prosecution of and lawsuits against any individual abuser of children, no matter how long ago the abuse is alleged to have occurred,” said Archbishop Gregory. “Additionally, for the past two decades the Catholic Church in Georgia has had what may be the strongest safe environment program, nonprofit or otherwise, in the state.

“Our church and our schools have strict zero-tolerance policies regarding sexual abuse of any vulnerable person.”

H.B. 605 does not protect anyone, the archbishop said in his statement.

“Rather, innocent people and the organizations to which they belong will be radically impacted based on allegations against individuals who may no longer even be alive and cannot speak for themselves,” he wrote.

In the statement, Archbishop Gregory emphasized the extensive work of the Atlanta Archdiocese’s Office of Child and Youth Protection to create and maintain safe environments and to help survivors of sexual abuse in their journey to healing.

Frank Mulcahy, executive director of the Georgia Catholic Conference, urges all Catholics to “read the bill.”

The Georgia Catholic Conference promotes public policy positions that affect the common good and interests of the Catholic Church, and works under the direction of the bishops.

As adopted by the House, H.B. 605 would allow lawsuits against churches, private schools, businesses and nonprofit organizations for actions asserted to have occurred many decades ago, potentially as far back as the 1940s. The accused are often deceased.

Recognizing that these lawsuits can be difficult if not impossible in determining the truth and risking grave injustice, the vast majority of states do not permit them.

A point of contention is a “look back” provision in the bill, said Mulcahy. The look back is establishment of a one-year window period, beginning July 1, in which anyone can file a lawsuit claiming to have been a victim of childhood sexual abuse that was concealed at any time in the past.

There is a difficulty shared by all nonprofits, including churches, said Mulcahy. “They don’t have records that go back that far. We have no way to defend. That’s part of the problem,” he told The Georgia Bulletin, the archdiocesan newspaper.

The current statute of limitations for past childhood sexual abuse is five years after the plaintiff reaches 18. The proponents of H.B. 605, including plaintiff trial lawyers, sought to change the law in 2015 to open a window allowing suits against private organizations, churches and nonprofits, regardless of when the abuse had occurred.

The state Assembly did not pass the law, but did approve a two-year window for suits against individual predators regardless of when the abuse happened. The Archdiocese of Atlanta fully supported that measure.

With the current bill, another factor behind the opposition is that it discriminates between the church and the state. All governmental agencies — park districts, public school districts and care facilities — are immune from the potential devastating effects of these lawsuits because of sovereign immunity. Churches, religious and private schools, nonprofits and businesses are affected.

“We have proposed language that would make it apply to everybody,” said Mulcahy.

A new version of the bill was expected during the week of March 19.

To allow suits against the government, any law must specifically waive the defense of sovereign immunity, a legal concept that protects a government, its departments and agencies from suits of liability without its consent. Additionally, state governments, counties and municipalities in Georgia are further protected by the requirement that a claimant must give written notice of a claim within one year of injury. H.B. 605 does not provide a waiver of sovereign immunity or extension of time to file a required notice.

A set of frequently asked questions, or FAQs, about the measure has been published on the website of The Georgia Bulletin — www.GeorgiaBulletin.org — to help Catholics and all citizens to be more informed about the legislation.

One issue highlighted in the FAQs is that H.B. 605 encourages lawsuits against nonprofits and businesses, but not the abusers themselves. Catastrophic legal claims could decimate organizations, resulting in no punishment for abusers but for innocent people who depend on jobs, the invaluable services of nonprofits and spiritual direction from churches.

In the archbishop’s statement, he emphasized that the efforts of the Office of Child and Youth Protection in the archdiocese, along with all dioceses in the United States, are audited on a yearly basis by an independent firm for compliance with the “Charter for the Protection of Children and Young People” of the U.S. Conference of Catholic Bishops.

“Our victim assistance director ministers to those who have suffered abuse without question, no matter when or where the abuse took place. Our Office of Safe Environment ensures compliance of all individuals working with children, youth and vulnerable individuals by offering comprehensive abuse prevention training and background checks,” he wrote.

The archdiocese operates a hotline for anyone, Catholic or not, who has been abused by a member of the clergy, a man or woman religious or a lay associate.

“I am pleased to say our child and youth protection program is among the most robust anywhere — within the Catholic Church or outside it — and our audit record for the past two decades speaks for itself,” said the archbishop.

Archbishop Gregory asks Catholics to discuss the flaws of this proposed legislation with state lawmakers.

“As your archbishop, I implore you to contact your state senator and other elected officials to let them know you join me and over one million of your fellow Catholics in opposition to H.B. 605,” he said.