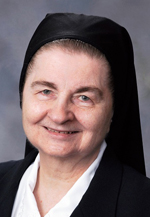 Born in Philadelphia, Sister Anna William entered the Congregation of the Sisters, Servants of the Immaculate Heart of Mary in 1958 from Ascension of Our Lord Parish, Philadelphia, and professed her vows in 1960.

She taught in elementary and secondary schools in the Archdiocese of Philadelphia, and in the Dioceses of Allentown, Harrisburg and Richmond.

Sister Anna William also served in the IHM Literacy Program before her last assignment to the Apostolate of Prayer in Camilla Hall.

The funeral Mass was celebrated at Camilla Hall Jan. 12. The principal celebrant and homilist was Father William E. Dean and the concelebrant was Msgr. Joseph Logrip.

In addition to her IHM congregation, Sister Anna William is survived by her sister-in-law, Linda Doyle; her loving niece, Joanne Shane; nephew, Michael Doyle and grandnieces and grand-nephews.

She was predeceased by her parents William and Anna Koniuk Doyle and her brother, William Doyle Jr.

NEXT: Sister of St. Joseph dies in 55th year of religious life