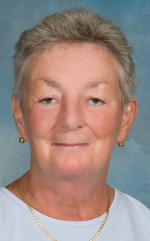 Daughter of the late James and Mary Keane, she was born in Philadelphia and attended Incarnation Grade School and Cardinal Dougherty High School in Philadelphia. She entered the Sisters of St. Joseph in 1963 and professed her final vows in August 1971.

Sister Margaret ministered in the Archdioceses of Philadelphia and Washington, D.C.

She is the sister of James Keane (Elka), John Keane (Kathleen), Regina Kirby (James), Mary Detwiler (Howard), Theresa Breslin (Patrick) and Patricia O’Malley (James). She is also survived by nieces, nephews and members of her Congregation, the Sisters of St. Joseph, Chestnut Hill.

The funeral Mass was celebrated Jan. 15 at St. Joseph Villa.