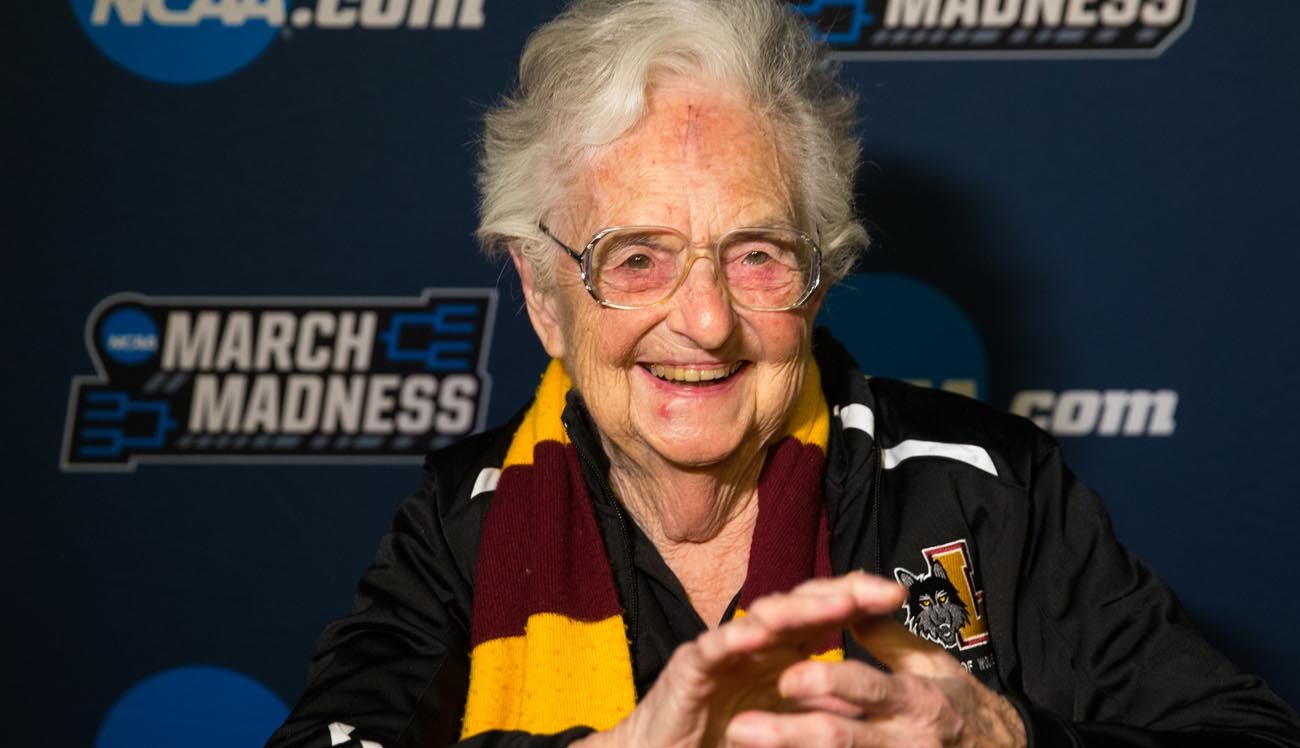 DALLAS (CNS) — A religious sister who is the longtime chaplain of the Loyola University Chicago men’s basketball team credited the pregame prayer and the players’ solid teamwork for the Ramblers’ thrilling, last-second 64-62 win over the University of Miami on March 15.

“Our team is so great and they don’t care who makes the points as long as we win the game,” Sister Jean Dolores Schmidt, 98, told a reporter with truTV.

Donte Ingram scored the winning 3-point basket at the buzzer during the first-round game in Dallas. It was Loyola’s first NCAA Tournament win since 1985.The Ramblers’ next game was March 17 against the University of Tennessee.

In the locker room before the game, Sister Jean said, she told the team: “We want to win, we want to get the big ‘W’ up there and we did.”

The Sister of Charity of the Blessed Virgin Mary made the comments in an interview courtside after the win over the Hurricanes. The TV reporter noted that as chaplain, she always gives detailed feedback after games in emails to Loyola’s coaches and players.

“What’s is your feedback to the team” on the win, the reporter asked. “Oh, thank God, thank God we did it, because we knew we would do it,” replied Sister Jean. “And when we were in the locker room ahead of the game, we just knew we would do this.”

In the pregame prayer, “we asked God to help us and I told God that we would do our part if he would do his part,” she said. “And I (prayed) the referees would call the right kind of game, that nobody would get injured, that we’d play with confidence and … we’d win the game, and then at the end when the buzzer rang, we’d want to be sure the score said we had the big ‘W.'” 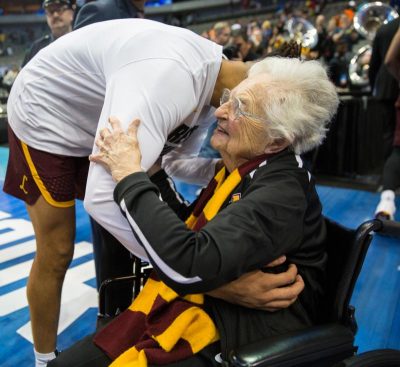 Sister Jean Dolores Schmidt embraces a player after the team’s win in the first round game of the NCAA Tournament against the University of Miami March 15 at the American Airlines Center in Dallas. (CNS photo/courtesy Loyola University Chicago)

Sister Jean has been the team’s chaplain since 1994. In January 2017, she was inducted into Loyola’s sports hall of fame.

Over the years, she has become has become a fixture on campus, even getting her own bobblehead day before a game in appreciation for her service. She keeps an office in the Student Center where her door is always open, and she lives in one of the dorms. She broke her hip in late 2017 and now uses a wheelchair.

Her pregame prayer with the team was once characterized by an ESPN writer as a mix of prayer, scouting report and motivational speech. She begins each prayer with the phrase “Good and gracious God.”

“I love every one of them,” she said in an interview last year with the Chicago Catholic, newspaper of the Archdiocese of Chicago. “I talk about the game to them and then they go out and play.” In addition to the team, Sister Jean usually leads the entire crowd in a prayer before tip-off.

Born in San Francisco in 1919, Sister Jean played six-on-six girls’ basketball in high school. Returning to California after entering the convent in Iowa — she joined the order in 1937 when she was 18 — she taught elementary school and volunteered as a coach in public schools in Los Angeles when she was teaching in that city. She coached everything from girls’ basketball, volleyball and softball to Ping-Pong and the yo-yo. She once said she had her girls’ team played against the boys to “toughen” them.

In 1961, Sister Jean took a teaching job at Mundelein College, the women’s college that prepared its students to teach, which was located next to Loyola in Chicago’s Rogers Park neighborhood. She remembers when, two years later, Loyola beat the University of Cincinnati in the NCAA championship game. Mundelein merged with Loyola in 1991, and she moved along with it.