Regardless of when its season ends, this has been a rather amazing ride for West Catholic Preparatory School’s girls’ basketball team.

Perhaps disrespected heading into the PIAA Class 2A state tournament, the Lady Burrs are no longer an afterthought. After defeating Southern Columbia, 67-53, in Tuesday’s second round, West advanced to the 6 p.m. quarterfinal game Friday, March 16 at Bethlehem’s Freedom High School. The Lady Burrs face a rugged challenge against District 11 champion Mahonoy Area High, owners of a gaudy 26-2 record.

At 14-12, West Catholic’s resume is not awe-inspiring, but the Lady Burrs’ level of play is beginning to reach such a level. Even in their losses against the Catholic League’s top five teams, West Catholic more than held its own, losing to Neumann-Goretti, Archbishop Wood, Cardinal O’Hara, Archbishop Carroll and Bonner-Prendergast by a more-than-respectable average of eight points. 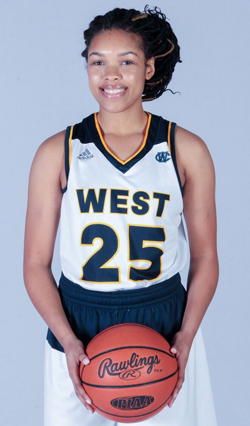 “I saw that we were coming together when we played Neumann-Goretti,” said Jaelyn Durrett, West’s lone senior. “Even though we lost, I actually saw us being a team. Our communication was better and I could see that we all had the same end-goal in mind. Once we all found our fire, we developed, in a matter of games, into a different team.”

In the win over Southern Columbia, West trailed by 11-0 and 25-12 in the first quarter before engineering a 24-12 run, highlighted by a pair of three pointers by freshman Daziy Wilson, to close out the first half and trailed by only 37-36.

A 12-2 start in the fourth quarter included two three-pointers by sophomore Tamiah Robinson, who finished with a game-high 24 points. Freshman teammate Destiney McPhaul added 18 for West Catholic, which outscored SC by 31-16 in the second half.

“This was our biggest comeback this season,” said Burrs coach Beulah Osueke. “I was able to see my team’s growth. If we had been down 14 in January or even early February, our shoulders would have slumped and we would have figured the game over with.

“But this time around, each kid stepped up and played within themselves and for one another. This was the strongest I’ve seen them look as a unit all season. I was concerned with the mistakes that we were making but trusted in our team leaders to be the calm that we needed, and they came through.”

A product of St. Laurence Grade School in Upper Darby, Durrett said she and her teammates benefitted from a mini-panic attack.

“We finally realized that it’s win or go home and we knew that we’ve worked too hard to lay down,” said Durrett. “Everyone contributed and fed off of everyone’s energy.

“I feel really blessed to be apart of a great team. Once we all gelled together, it was a beautiful thing. They are my family.” 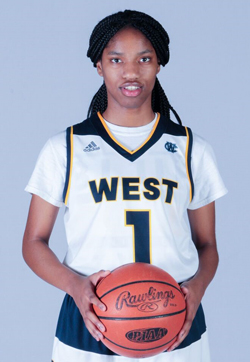 Robinson said the Lady Burrs have benefitted by their participation in the Catholic League, calling it “one of the best leagues in Philadelphia.

“In the state playoffs we see teams that are similar to the teams in the Catholic League,” said Robinson. “Being that we have been through that experience, we know how to react and how to finish our games.”

Durrett said “it would mean everything” to her if the Lady Burrs could win the next three contests.

“We’ve always been the underdog,” said Durrett, “so we’re coming to shock the whole state.

“People in school see us growing a lot. Even teachers are getting hyped about us advancing, and some of them travel to these far-away games.”

Not surprising. After all, the secret is out. West Catholic Preparatory has become a legitimate basketball program.

***
John Knebels can be reached at Jknebels@gmail.com or on Twitter @johnknebels. 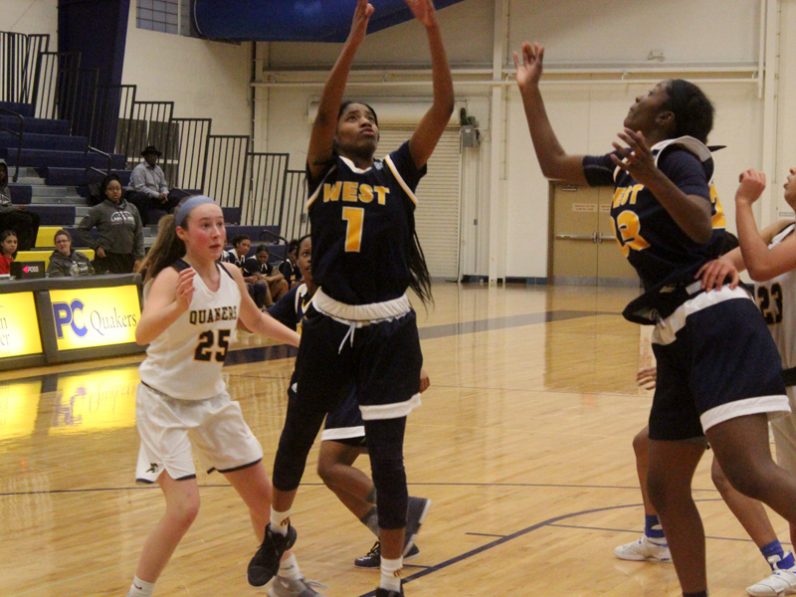 In a 59-35 West Catholic win earlier this season over Penn Charter, the Burrs’ Tamiah Robinson (no. 1) goes up for a shot while teammate Daja Hosendorf blocks out the defense. (Photo by TedSilary.com)