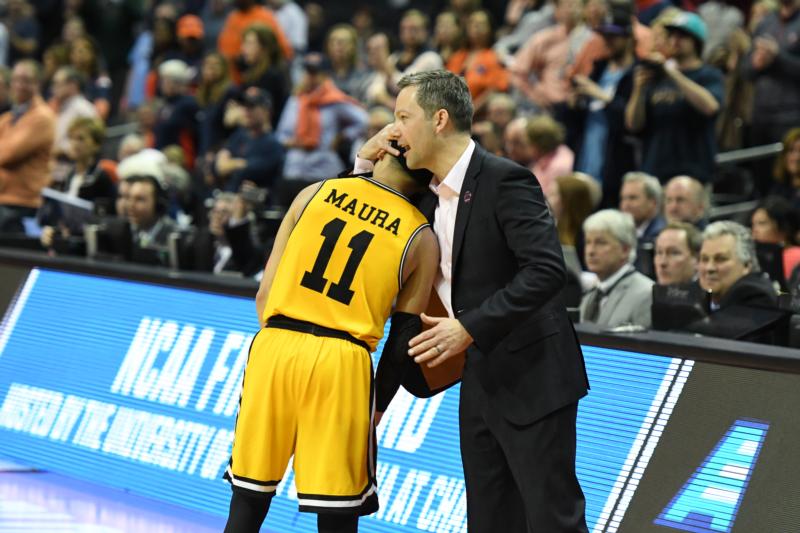 UMBC Retrievers head coach Ryan Odomand embraces K.J. Maura shortly before the team beat the Virginia Cavaliers March 16 in the first round of the 2018 NCAA Tournament in Charlotte, N.C. It was the first time in men’s NCAA Tournament history that a No. 16 seed beat a No. 1 seed. Odom and his wife, Lucia, belong to St. Mary’s parish in Annapolis, Md. (CNS photo/Mitchell Layton, courtesy UMBC)

BALTIMORE (CNS) — By now, the college basketball world knows that UMBC stands for the University of Maryland Baltimore County.

The Retrievers’ historic appearance in the NCAA men’s basketball tournament, where they became the first No. 16 seed to earn a victory in 136 tries, also went over pretty big in Anne Arundel County.

UMBC is coached by Ryan Odom, a 43-year-old whose second year at the Catonsville school produced magic. Odom and his wife, Lucia, are parishioners of St. Mary’s in Annapolis. Their children, Connor and Owen, are in the 10th and fifth grades at St. Mary’s School, respectively. Conor played on the Saints’ varsity basketball team this winter.

Grant, a media and communication studies major, is the epitome of the team concept that allowed UMBC to rout top-ranked Virginia, 74-54, in the first round of the tournament in Charlotte, North Carolina, March 16. The ultimate Cinderella lost in the second round to Kansas State 50-43 March 18.

The 6-foot-2-inch Grant set a UMBC career record by playing in 129 games. He started on losing teams as a freshman and sophomore, and took on a reserve role when Odom was hired before the 2016-17 season and guided UMBC to back-to-back 20-win seasons for the first time in their 32 years of Division I play.

Grant was back in the starting lineup at the start of this season, but he came off the bench in 20 of the Retrievers’ last 21 games. For the season, he averaged 7.5 points, 2.4 rebounds and 2.6 assists, third on the team behind K.J. Maura, the charismatic little point guard from Puerto Rico, and Lyles.

“Jourdan always understood what made a team successful,” said Derrick Lewis, his coach at Spalding.

A Bowie resident, Grant came to Spalding more highly regarded as a baseball prospect but made the Cavaliers’ varsity basketball team as a freshman. As a senior, he averaged 18.5 points, 5.3 assists and 4.2 rebounds, but Lewis remembers his willingness to do anything for the good of the team.

“We had a very good team when he was a junior, and he played a lot of point guard,” Lewis told the Catholic Review, news outlet of the Archdiocese of Baltimore. “We had some pretty good players, and he made everyone better. His basketball IQ and understanding of the game, that helped us get to the Baltimore Catholic League final.” 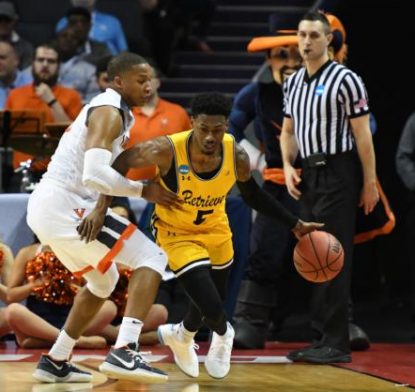 Jourdan Grant of the No. 16 seed UMBC Retrievers dribbles the ball past a player with the No. 1 seed Virginia Cavaliers March 16 in the first round of the 2018 NCAA Tournament in Charlotte, N.C. Grant is a graduate of Archbishop Spalding High School in Severn, Md. (CNS photo/Mitchell Layton, courtesy UMBC)

Grant made the Catholic league’s all-tournament team in 2013, when Spalding finally lost in the championship game to Mount St. Joseph High School and Phil Booth, the hero of Villanova’s 2016 NCAA championship game win over North Carolina.

While Lyles’ three-pointer at the end upset Vermont in the championship game of the America East tournament March 10, Grant had a team-high four assists and shut down the Catamounts’ top perimeter threat down the stretch.

Against Virginia, Grant hit two big three-point shots and gathered four rebounds, as the Retrievers overwhelmed the Cavaliers and became a sensation on Twitter thanks to athletics director of multimedia communications Zach Seidel, whose father, Jeff, is a contributor to CatholicReview.org.

Seidel promoted UMBC’s record of academic distinction — it produces more black medical and doctoral degree-earners than any college in the country — and its underdog status, apropos given that its mascot is the Chesapeake Bay Retriever.

Kathleen Mahar, president of Archbishop Spalding High, watched the Virginia game “at home on the couch in front of the fire with my Irish Wolfhound.”

When Grant was a Spalding senior, he was in Mahar’s honors class on global issues.

“As on the basketball court,” she said, “he had a strong ethic and managed academics and athletics well.”

Grant is among approximately 40 Spalding graduates currently enrolled at UMBC.

“I exchanged a lot of emails with alums, all bragging that they knew Jourdan, when I knew they didn’t,” Mahar said. “All kidding aside, we could not be more proud.”

Father John Rapisarda, pastor of Our Lady of Victory in Arbutus, is the chaplain of Catholic Campus Ministry at UMBC.

The university’s previous most notable athletic notoriety came from the men’s soccer team, an NCAA semifinalist in 2014, which is coached by Pete Caringi, a graduate of Calvert Hall College High School in Towson and parishioner of St. Joseph in Fullerton.