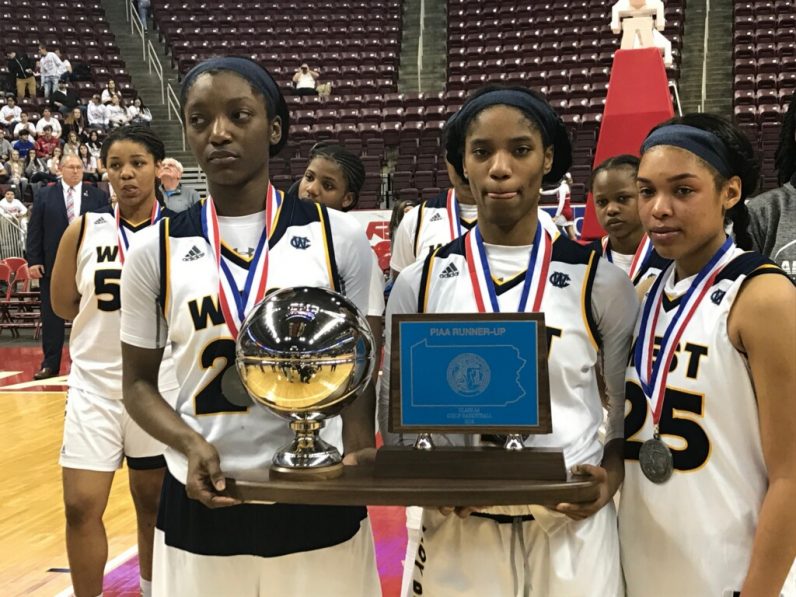 West Catholic’s race to a PIAA Class 2A girls’ state basketball title was derailed in a thriller Monday afternoon, March 26, at the Giant Center in Hershey, Pa.

When asked if the loss was bittersweet because of how far her team had come, Osueke was honest.

“The bitter,” she said, “is a lot more present than the sweet right now.”

For good reason. This was a game the Burrs could have won. According to the post-game statistics compiled by the PIAA staff, West was charged with 12 turnovers, but it seemed way more than that.

Arguably worse was West’s lack of marksmanship. The Lady Burrs shot only 18 for 56 from the floor, 4 for 16 from three-point land, and 2-5 from the foul line.

“When you shoot 18 for 56, that’s a pretty tough percentage to beat a good team,” said Osueke. “I’m surprised we only lost by three.”

West would have won had it not been for a dominating performance by B-A sophomore Alli Campbell. The 6-foot sophomore tallied 34 of the Blue Devils’ 45 points, made 10 of their 14 field goals, four of their six threes, and a blistering 10 of their 11 team free throws.

Led by junior Kyliah Singletary’s 10 and McPhaul’s eight, West Catholic outrebounded B-A by 35-29, snaring 15 boards to three on the offensive end. Robinson dished five of West’s eight assists in a full 32 minutes of action. The Burrs played eight players, all of whom provided double digits in minutes played, a complete contrast to the Blue Devils, whose five starters played the entire game.

“I’m disappointed in myself kinda,” said Jaelyn Durrett, West Catholic’s lone senior. “I’m sad. We prepared so much for this game, like the whole season. It’s kinda heartbreaking.”

The Lady Burrs trailed by as many as nine (16-7 with 6:44 left in the second quarter) but took the lead at 21-20 in a back-and-forth third quarter that saw Campbell score all of B-A’s 14 points compared to six different Lady Burrs countering with a composite 15, ending with West trailing by 34-32.

A smooth, acrobatic layup by McPhaul gave the Lady Burrs a 39-37 edge with 3:15 remaining in regulation, sending West’s faithful into overdrive. Unfortunately, the Blue Devils seized control and used an 8-0 run to make futile a three-pointer by Robinson four seconds from the final buzzer.

“I think a lot of our inconsistencies have to do with youth,” said Osueke. “We did not do enough to finish them off. We kept making mistakes that hurt us. They do a lot of harm to your momentum. “

Osueke was told she had a look of pride.

“I wanted more, though,” she said. “I am proud of them, but I will always want more.”