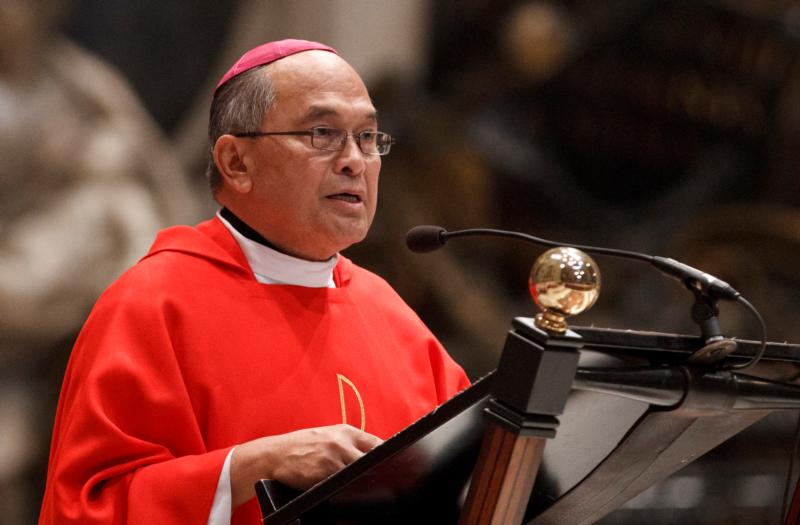 VATICAN CITY (CNS) — Publicly apologizing on behalf of the whole archdiocese for the “grave harm” caused by former Archbishop Anthony S. Apuron of Agana, Archbishop Michael J. Byrnes said a new chapter of humility, repentance and healing has opened for the Catholic Church in Guam following a Vatican verdict against his predecessor.

“I called and still call upon all Catholics on Guam to intensify their prayers and with great humility, offer sacrifice for the grave harm and sins which we have experienced or have enabled in our church,” Archbishop Byrnes said during a news conference in Guam March 18.

Archbishop Byrnes, who has been leading the archdiocese since 2016, made his comments after a Vatican tribunal announced March 16 it found Archbishop Agana guilty of some of the accusations made against him, including the sexual abuse of minors.

After a canonical trial conducted by the apostolic tribunal of the Congregation for the Doctrine of the Faith, Vatican judges imposed the following sanctions on the 72-year-old archbishop: the removal from office and a prohibition from residing in Guam. The archbishop can and will appeal.

During the news conference, Archbishop Byrnes said he did not know on what charges the former archbishop had been found guilty and which ones had been dismissed. In fact, he told local reporters, he had received no communication about the trial’s findings other than “I got a phone call saying to go to this site” to read the Vatican’s public announcement.

He said there had been no follow-up from the Vatican either as of March 17 and he assumed the former archbishop was now to be called Bishop Apuron, since losing the office of archbishop meant also losing the title associated with it.

“We’ll see with the appeal” what the final situation will be, he added.

Archbishop Apuron released a statement March 17 through his lawyer, Jacqueline Taitano Terlaje: “While I am relieved that the tribunal dismissed the majority of the accusations against me, I have appealed the verdict. … God is my witness; I am innocent and I look forward to proving my innocence in the appeals process.”

Supporters of the archbishop, conversing anonymously with journalists, claimed the archbishop was found guilty on only two of six charges and that the sentence implies those charges were not the most serious ones. Generally, clerics found guilty of sexually abusing minors face either removal from the priesthood or are sentenced to a life of prayer and penance and banned from any public ministry.

Archbishop Byrnes said while there is much work and consultation to do in regard to local legal issues, he felt “a sense of relief” when the Vatican verdict had been announced.

He said his reaction upon hearing the news was, “OK, good. Something’s happened and they’re not just stringing us along.” The announcement of the verdict from the Vatican investigation, which began in February 2017, had been expected last year, the archbishop had said.

Archbishop Apuron is among the highest-ranking church leaders to have been tried by the Vatican for sexual offenses.

In a statement released March 16, the Vatican tribunal said, “The canonical trial in the matter of accusations, including accusations of sexual abuse of minors, brought against the Most Reverend Anthony Sablan Apuron, O.F.M.Cap., Archbishop of Agana, Guam, has been concluded.”

“The apostolic tribunal of the Congregation for the Doctrine of the Faith, composed of five judges, has issued its sentence of first instance, finding the accused guilty of certain of the accusations and imposing upon the accused the penalties of privation of office and prohibition of residence in the Archdiocese of Guam.” U.S. Cardinal Raymond L. Burke, a noted canon lawyer, was the presiding judge in the canonical investigation of Archbishop Apuron.

The statement did not specify the number of charges the archbishop faced, how many of them he was found guilty of or even the nature of the offenses for which he was convicted.

Pope Francis placed Archbishop Apuron on leave in June 2016 after the accusations were made public. The pope named an apostolic administrator to run the archdiocese for several months and then named Coadjutor Archbishop Michael J. Byrnes, a former auxiliary bishop of Detroit, to take over.

Until the Vatican court handed down its sentence, Archbishop Apuron had continued to hold the title of archbishop of Agana, but did not hold the faculties, rights or obligations pertaining to the office, because they had been granted to Archbishop Byrnes.

The former archbishop greeted Pope Francis at the end of a general audience February 7 in Rome. The Italian website, Vatican Insider, claimed former Archbishop Apuron told the pope, “Holy Father, I wanted to see you before I die.”