The Theewaterskloof Dam, which supplies most of the water for Cape Town, South Africa, is seen in an aerial view Feb. 20 in Villiersdorp. (CNS photo/Mike Hutchings, Reuters)

CAPE TOWN, South Africa (CNS) — With severe restrictions on water usage in drought-stricken Cape Town, poor communities feel a strong sense of injustice, which needs to be addressed, said a parish priest in one of the city’s oldest black townships.

There is a “a lot of anger, with people in informal settlements saying, ‘We grew up using small bowls of water to wash ourselves; this is nothing new,'” said Jesuit Father Rampe Hlobo of St. Mary’s Church in Nyanga.

Water restrictions in Cape Town, which is battling to keep its taps flowing following a three-year drought, make it compulsory for the city’s 4 million residents to use no more than 50 liters — about 13 gallons — per person per day.

City officials estimate that informal settlements use just 5 percent of the city’s water.

“The amount of water that the poor use is a fraction of that used by those in the suburbs who have washing machines, dishwashers and other appliances,” Father Hlobo told Catholic News Service.

In the black townships and informal settlements, “there is a feeling that ‘it is you rich people who have finished the water, and now you want us to share the consequences,'” he said.

In late February, following a decline in water consumption, Cape Town moved its estimate for Day Zero from June 4 to July 9. Day Zero is the date on which the municipal taps will be switched off and Cape Town residents will start lining up for their daily 25-liter rations.

Thousands of Cape Town residents already line up every day to collect fresh water from a natural spring, next to a brewery in the suburb of Newlands, to supplement their quotas. Security guards employed by the brewery impose order in the lines.

In preparation for Day Zero, people in affluent areas of the city are putting in rainwater tanks and stocking up on purchased water, but “poor families cannot afford to do this,” Father Hlobo said. 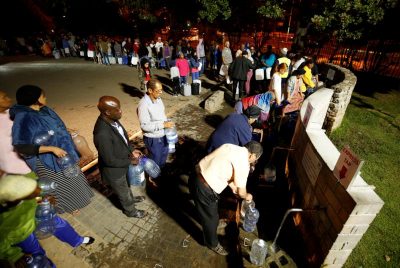 “I very rarely see anyone in a township drinking bottled water,” he said, noting that “Day Zero will bring with it the threat of street protests and violence” in this situation of inequality.

The threat of running out of water has also led to an increased awareness, mostly among young people, of the need to care for the environment, Father Hlobo said, noting that about 200 people had attended a February workshop he conducted at St. Gabriel’s Church to help people understand Pope Francis’ environmental encyclical “Laudato Si’, on Care for Our Common Home.”

“We are learning lessons the hard way as we live the consequences of not taking care of the environment,” he said.

While car-washing businesses are still thriving in Cape Town’s informal settlements, where a few communal taps typically provide water for several hundred people, people in the townships who ran similar businesses from their own backyards have had to shut them down, Father Hlobo said.

“Many people’s livelihoods depend on water,” he said, noting that young people in his parish told him how upsetting it is to “have their family’s income disappear through the consequences of climate change and to feel the pinch so directly.”

“Young people are interested in the message of “Laudato Si'” and in understanding what’s important and why we should not damage the environment,” he said.

While inspectors regularly check up on water consumption in downtown Cape Town and its suburbs, there is a lot of waste in informal settlements that goes unpunished because of inadequate policing, Father Hlobo said.

“People are continuing their car-washing businesses from communal taps in informal settlements,” he said, noting that the 3,000-rand ($250) fine for using municipal water to wash cars is rarely issued.

“Law enforcement agencies are not distributed equally throughout Cape Town, and so there is a feeling here that nobody is watching and nobody will hold you accountable,” he said.

The city “needs to face this challenge of how to enforce water conservation in informal settlements,” he said.

Jesuit Father Chris Chatteris, who teaches at St. Francis Xavier Seminary in suburban Athlone, said there is a certain grace to Day Zero.

“Reality has struck home and, through our sharing of ideas on how to preserve water, we are becoming more conscious of our environment,” he told CNS.

“The world is watching Cape Town and how we cope and manage this crisis,” he said, noting that “the conversations about how we are going to adapt” to changing weather patterns must continue.

Water conservation measures at the seminary have inspired others “who visit to see what they can do in their parishes” around the city, Father Chatteris said.

“Every day we read our water meter,” he said, noting that with about 40 people living on the property, “we are using less than we are allowed.”

This daily discipline of reading the meter “reminds us of our need to be sparing in our use” of water, he said.

Seminarians can shower only three times a week, and they do fewer loads of laundry in the past, he said.

“We do a lot of recycling of water,” he said, noting that four tanks to collect rainwater have been installed on the roofs of the seminary buildings.

Situated on the Cape Flats, the seminary is near an aquifer and a well from which water is pumped into large containers in the seminary bathrooms, Father Chatteris said.

“It’s not drinkable, but it does enable us to flush the toilets properly, which is a real boon in a big place with a lot of people,” he said.

In a February letter to priests and religious, Archbishop Stephen Brislin of Cape Town advised that, to save water, meetings in parish halls and other church property be reduced to “absolutely the most essential.”

Taps in bathrooms should be closed and hand sanitizer provided instead, he said.

“Judge the circumstances in your parish and determine whether it would be beneficial to hire portable chemical toilets,” the archbishop said, noting that these “are expensive and much in demand, so it may not be possible.”

“Many of our parishes have taken initiatives” such as installing rainwater storage tanks, Pallottine Father Michael Clement told CNS.

Nazareth House — which cares for orphans, disabled children and elderly people with dementia, among others — has been assured by authorities that it will receive municipal water through daily deliveries if municipal taps run dry, said Werner Laubscher, chief executive officer.

Schoolchildren in other South African cities have been raising funds to buy and send 5-liter bottles of fresh water to Nazareth House, Laubscher said.

Spring water from Table Mountain runs through Nazareth House’s property, and plans are being made to use this water for the residents’ vast washing and laundry needs, he said.

The water fills a reservoir on the grounds, and the overflow runs into storm drains that flow into the sea.

After an outcry from neighbors who objected to the grass being watered, the sprinkler system from the reservoir was turned off, Laubscher said. 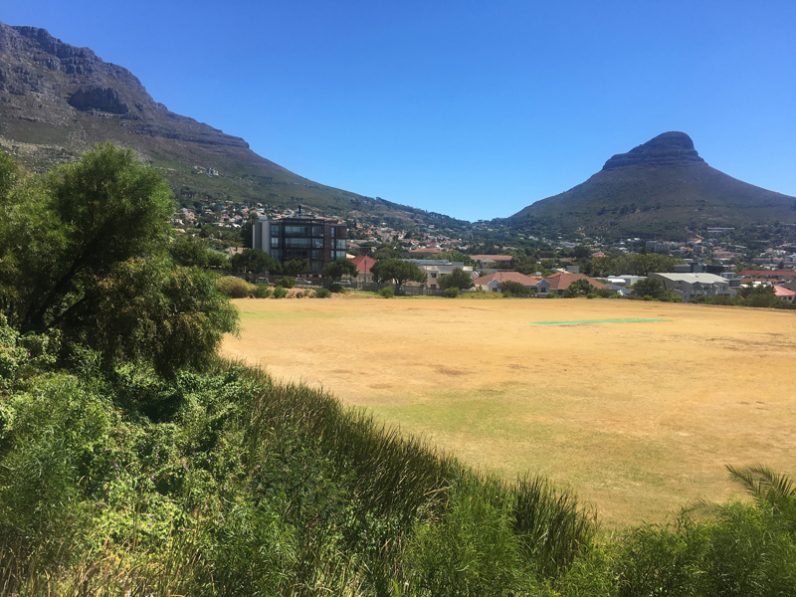 A drought-stricken field is seen Feb. 26 on the grounds of the Nazareth House in Cape Town, South Africa. Nazareth House cares for orphans, disabled children and elderly people with dementia, among others. (CNS photo/Bronwen Dachs)

NEXT: Melbourne court to decide if cardinal stands trial on abuse allegations