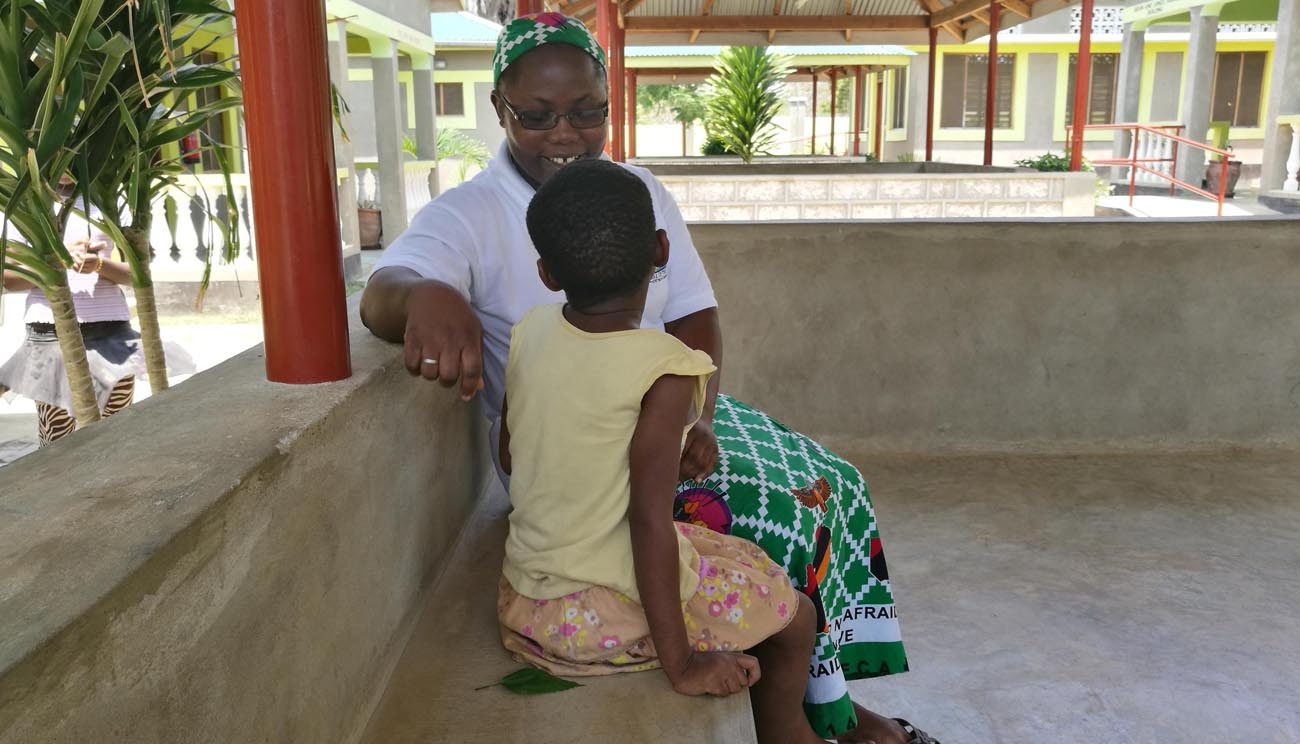 Sister Matilda Baanuo, a Missionary Sister of Our Lady of Africa and coordinator at the Pope Francis Rescue Center, talks with a child at the center in Malindi, Kenya, in 2017. (CNS photo/Lilian Muendo, courtesy GSR)

MALINDI, Kenya (CNS) — Along the warm waters of the Indian Ocean, leaving footprints on Kenya’s white sandy beaches, aging white men and women stroll arm-in-arm with local girls and boys young enough to be their grandchildren. They are retired tourists, many of whom are drawn to the Kenyan coast by the area’s reputation as a haven for sex tourism — especially with children.

Though Thailand is the most well-known sex tourism hub, Kenya’s coast is rapidly becoming a popular destination for people looking for underage prostitutes. A UNICEF study found that as many as 30 percent of girls ages 12-18 in Kenya’s coastal areas are involved in some form of sex work. UNICEF also estimates that among Kenyans’ sex workers, one in 10 began before reaching puberty.

The coastal area has a high incidence of child sexual exploitation due to widespread poverty and society’s acceptance of the phenomenon.

“Abject poverty here is painful,” said Sister Matilda Baanuo, a Missionary Sister of Our Lady of Africa and the coordinator at Pope Francis Rescue Center, a residential and counseling center for victims of sexual exploitation in Malindi.

In 2011, almost 70 percent of the 1.1 million people in the district around Malindi lived on less than a dollar a day, the poverty level established by the World Bank at that time.

Sex work, including for children, is seen as an acceptable means of earning a living in coastal Kenya. To parents and relatives, a child with a white tourist as a “girlfriend” or “boyfriend” is the fastest way to get the family out of poverty. Young girls and boys are encouraged by their families to look for tourists who will cater to family needs. This means families will purposefully keep the children out of school to free them to search the beaches for “work.”

The sisters running the Pope Francis Rescue Center try to encourage parents to find alternative income-generating projects, like small-scale farming and small businesses. But they are running up against challenges from parents who find it easier to sell their children to pimps or tourists for sex.

“The white retired tourists are generous, and it is easy money for poor families,” said Father Ambrose Muli, director of the Pope Francis Rescue Center, which started in 2015 to provide a temporary but immediate safe haven for child sex abuse victims. 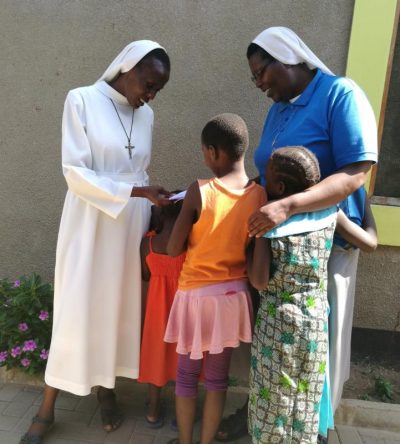 Children at the Pope Francis Rescue Center in Malindi, Kenya, present their homework to Sister Benedicta, a counselor from Sisters of the Holy Family, and Sister Veronica Nyambura. (CNS photo/Lilian Muendo, courtesy GSR)

“In Watamu, the coastal town where I grew up, almost every household has a white tourist taking care of the entire family’s needs, and they are ‘gifted’ with a child in return for their generosity,” said Father Muli. “Many girls who were my classmates in high school owned big houses built for them by old white tourists before I even decided what I wanted to do with my life.”

The priest said the luxurious lifestyle and what is seen as a quick way out of poverty make it hard to rescue the young girls from sexual exploitation.

“Prostitution pays well, and so it’s not easy to keep the young girls and boys here (at the Pope Francis Rescue Center),” said Father Muli. “They have been exposed to so much, and they always escape back to the beaches. They go through harrowing sexual experiences in the hands of their old white tourist boyfriends and girlfriends. In short, they are sex slaves, but they still prefer that kind of life compared to what we offer at the center because of the financial benefits to their families.”

Sister Redempta Kabahweza, also a Missionary Sister of Our Lady of Africa who is the main counselor at the center, recalled rescuing two girls ages 10 and 12 from two Italian tourists who had sexually abused the girls for two years. Many tourists, drawn by the cheap cost of living and the ready availability of sex, purchase homes and live in the area for all or part of the year.

The sister described the trauma of counseling the older girl.

“I would get her into the counseling room and, once I closed the door, she would start shaking. Preparing her to testify in court was very difficult, because she had to recall all the horrific sexual experiences,” said Sister Kabahweza. The girls lived in the center for five months before they moved in with their aunt.

The cousin was arrested and released on a $2,000 bond. The two Italian men left Kenya immediately after the girls, supported by the Pope Francis center, reported the case to the police.

“The case has become very complicated, because the white men left the country for Italy, and we still do not know about their whereabouts,” said Naomi Kazungu, a case manager at the governmental Malindi Child Protection Center.

Many offenders escape detection for a long time because they abuse children in private residences, particularly along the coastal areas of Mombasa, Malindi and Lamu.

Kazungu is urging the government to allow the child protection department access to private villas in cases of suspected child sexual exploitation without the current restrictions.

“It is very difficult to arrest foreign sex offenders, because a majority of them live in private villas,” she said. “You see an old white man walking into a private villa with a little schoolgirl, or an old white lady with a young boy in school uniform. You definitely know they are being sexually exploited, but the law forbids you from accessing a private villa unless you get a court order. So, unless the government removes those restrictions in accessing the private villas, our hands are tied. By the time you get a court order, the child has already been sexually exploited and left the villa,” explained Kazungu.

Father Bernard Malasi, child protection coordinator at the Malindi Diocese, said some white women in their 70s and 80s support young boys by paying for their education in exchange for sex. 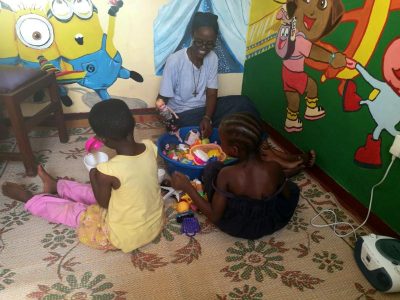 Sister Redempta Kabahweza, a Missionary Sister of Our Lady of Africa, plays with two of the youngest sexual abuse survivors during a counseling session in 2017 at Pope Francis Rescue Center in Malindi, Kenya. (CNS photo/Lilian Muendo, courtesy GSR)

“When (the tourists) come to the Kenyan coast for holiday, they come with goodies for the family and tell the parents of the boy they are supporting that they would like to spend a week with him,” explained Father Malasi. “The parents agree; their mouths are zipped.”

The priest said there is always suspicion when the children are taken out of school for a short period. Sometimes, parents are clear about the reason why, telling teachers, “My child’s mzungu (white man or woman) has come.”

“The tourists say, the younger the better,” said Rama, a resident of Malindi who declined to give his full name. “A mother who is a prostitute will sell her little daughter to a mzungu because he wants a young blood. The child will then give the money to the mother.”

Kenya’s 2006 sexual offenses act defines sex with a person under 11 years old as rape and applies a minimum sentence of life in prison. Offenders who sexually abuse children ages 12-15 and 16-18 have minimum sentences of 20 and 15 years, respectively.

The age of sexual consent under Kenyan law is 18. But underage girls register for identity cards to falsify their ages to gain entry into hotels and entertainment spots where they meet with older white men and women.

“We had a case of a mzungu who wanted the church to baptize a girl and change her date of birth,” said Muli. “The man was 46 and the girl was 15. We immediately informed the police and the tourist ran away. They use all means to make the young girls adults so that they can exploit them without any accusations of (the girls being) underage.”

Sex tourism is a serious business on Kenya’s coast, including pimps or “beach boys” who act as intermediaries. Brian Musangi (not his real name) is a “beach boy” on a beach north of Mombasa. His main job is to procure young girls and boys for white tourists.

Musangi said he got into the tourism sex industry at the age of 15. Now 20, he lives with a 76-year-old woman from Sweden, and they are legally married. They started living together when he was 15 but got legally married when he turned 18.

“She bought me a five-bedroom house here at the coast,” said Musangi. “We live together, but she’s too old. She will die soon, and I will inherit the house.”

He said his 16-year-old sister is living with a 64-year-old man from the Netherlands. Their single mother is also in the sex tourism industry.

Musangi helps to organize traditional dances at beachfront hotels and bars, after which tourists often seek sexual favors from the child performers. Children also are sought out under the guise of being hired to do housework in private homes, and some hotel staff have been accused of delivering children for sex with guests.

People in the region may opt to adopt needy children and, instead of caring for them, hire them out as prostitutes. Other children are brought to the coastal region from rural areas from around the country, where poverty is even more dire.

“We travel to the interior, and women and children are lining up along the road to receive goodies from white tourists,” said Kabahweza, who travels extensively to try to safely reintegrate child victims with their families after they are rescued. “They hear the sound of a car and all rush to the road, with the children shouting ‘mzungu wangu’ (my white man or woman). It is poverty on another level.”

Tourism is one of Kenya’s most important economic sectors, accounting for 10 percent of the country’s gross domestic product. The importance of tourism for Kenya’s economy is making officials reluctant to address the child sex tourism phenomenon, according to the nongovernmental organization Coast Women in Development.

For the three years the Missionary Sisters of Our Lady of Africa have worked in the Kenyan coastal region trying to rescue children from sexual exploitation, they have realized that even the children see it as a normal way of earning a living.

Sister Baanuo remembers a girl who had been working as a prostitute for two years.

“When you try rescuing her, with a promise to take her back to school, she asks, ‘Why go to school when I can get a mzungu who will take me to Europe and buy me a villa to live in?'” Sister Baanuo said. “These kids just need guidance. They need to be left to be children.”

Lilian Muendo is a freelance journalist based in Nairobi, Kenya.

NEXT: When the devil strikes, exorcists are ready for battle