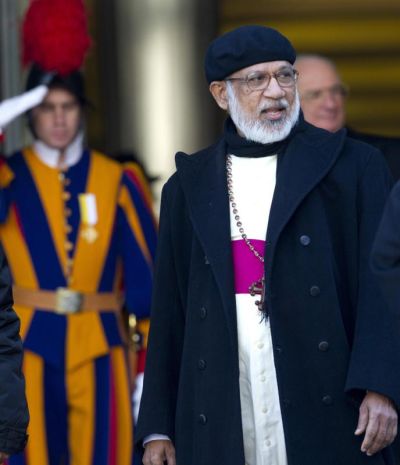 An Indian court has asked police to investigate allegations of breach of trust involving Cardinal George Alencherry of India, major archbishop of the Syro-Malabar Catholic Church. Cardinal Alencherry is pictured in a 2012 photo at the Vatican. (CNS photo/Claudio Peri, EPA)

Ucanews.com reported the High Court of Kerala’s move March 6 allows criminal proceedings to be taken against the major archbishop and head of the Syro-Malabar Catholic Church.

The cardinal, two senior priests and a real estate agent are accused of selling several plots of lands belonging to the cardinal’s Ernakulam-Angamaly Archdiocese, incurring a loss of more than $10 million.

“The police are to investigate if there was a breach of trust. They need to ascertain if the accused have disposed of the property entrusted to them dishonestly or misappropriated it for their own use,” Litto Palathinkal, the archdiocese’s legal consultant, told ucanews.com.

If a criminal breach of trust is proved, the accused face fines and jail terms of up to three years, the lawyer said.

Palathinkal said arrest and detention are warranted only if police need the accused in custody for interrogation to prove a crime or to prevent the accused from absconding.

“That is not the case here. We do not expect any arrest,” he said March 7.

The scandal made headlines last year after the archdiocesan presbyteral council — a canonical representative body of priests — claimed two priests and Cardinal Alencherry sold off prime land in the state’s commercial capital, Cochin, at undervalued prices and bypassed canonical bodies and financial advisers in the archdiocese.

Since then, three Catholic laypeople have filed police complaints seeking investigation and later complained of police inaction. The court had dismissed two other petitions on the grounds that the cardinal owned the archdiocesan properties and was free to dispose of them as he wished.

“The cardinal has violated no laws of the country and kept all the laws of the church” in the land deals, said an official statement from the office of the cardinal.

Cardinal Alencherry signed the sale deeds as head of the archdiocese to generate funds to pay off an accumulating bank loan. However, the statement said, it is true that the buyers did not remit the entire amount in the archdiocesan accounts. It denied the deals were hidden from canonical bodies and financial advisers.

“We are very sorry that we have this situation,” said Father Paul Thelakkat, former spokesman of the Syro-Malabar Church and a senior priest under the cardinal.

“The issue was well within the church for the past 18 months. The priests have informed all church bodies, including the Vatican, of the situation. Unfortunately, civil courts and police are now managing it,” he said.

“Had the church systems been activated to restore truth and justice, and the church’s leadership acted with integrity, we could have avoided this regrettable situation,” he added.

NEXT: Jewish leader: Polish church should speak out as anti-Semitism rises