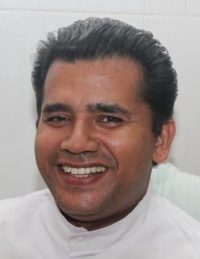 Father Xavier Thelakkat, rector of the shrine of St. Thomas at Malayattoor, India, is seen in this undated photo. (CNS photo/Anto Akkara)

UPDATED – BANGALORE, India (CNS) — Father Xavier Thelakkat, rector of the shrine of St. Thomas at Malayattoor, was stabbed to death March 1 around noon.

Police arrested Johny Vattekadan, a sacristan whom Father Thelakkat had suspended earlier for misconduct, including alcoholism. Witnesses said the two were arguing when the former sacristan stabbed the priest.

St. Thomas shrine sits on a hill about 30 miles north of Cochin. The Vatican had granted the shrine international status in 2004.

Father Thelakkat, 52, had been rector there since 2011. He was stabbed at the Sixth Station of the Cross as he came down the hill after checking on preparations for the annual Lenten pilgrimage.

An official of the Archdiocese of Ernakulam-Angamaly said although the priest was only stabbed in the thigh and leg, “It took time to bring the profusely bleeding priest down the slopes to rush him to (a) hospital.”

“Father Xavier was dead by the time he was taken to the hospital,” the official added.

The official said local youth tracked Vattekadan in the nearby jungle, then summoned police.

NEXT: Irish bishop resigns after criticism of his treatment of abusive priest