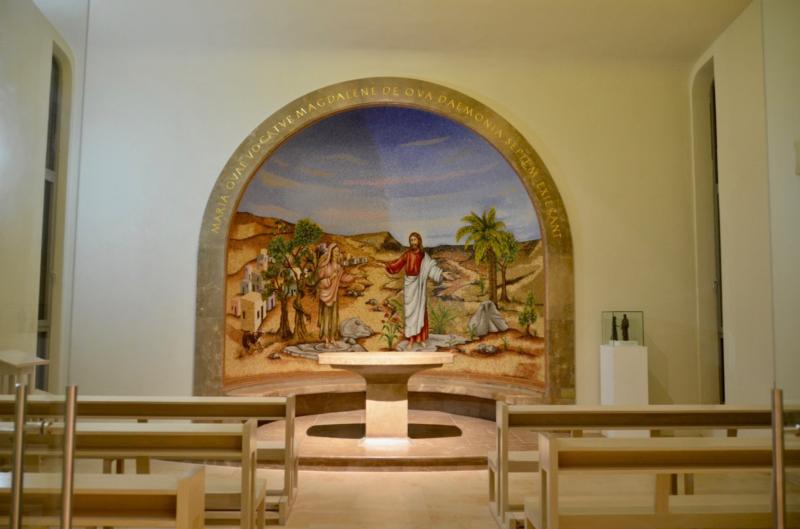 A mosaic of Christ and Mary Magdalene is seen in the Duc in Altum in Magdala, Israel.(CNS photo/Josephine von Dohlen)

MAGDALA, Israel (CNS) — When Amoun Sleem was 8, after her mother’s death, she dropped out of school and took to the streets as a beggar in Jerusalem’s Old City, trying to help her father support her family.

“After running after tourists selling postcards and begging on the streets for two years, I didn’t feel any better about myself,” she said. “I decided to go back to school. I wanted to make something of my life, and didn’t want to become somebody who doesn’t know anything.”

In 2005, Sleem, along with others in her Domari, or Gypsy, community, established a Domari center in the neighborhood of Shuafat. There, Gypsy women and children come together for community and comfort, also selling their handiwork to visitors.

Today, Sleem, in her 30s, shares her story of the impact of her education and the center with women around the world. In the spring of 2017, she shared this story at a seminar sponsored by the Magdalena Institute, a community dedicated to the issues of human dignity, especially for women.

The Magdalena Institute devotes its work to discovering the impact of a woman and helping her realize the influence behind her “feminine genius,” a term coined by St. John Paul II.

“In its essence, the feminine genius is when a woman is sincerely giving the gift of herself to others; striving to be what she is called to be by God, she ends up putting this humanizing touch on society, brings this feminine element into play,” said Jennifer Ristine, director of the Magdalena Institute.

“No matter what your past is, you still possess dignity,” she told Catholic News Service.

Magdala is traditionally known to be the hometown of Mary Magdalene and a place where Christ most likely spent time, along the Sea of Galilee.

In the Gospels, Mary Magdalene follows Christ and his disciples throughout Jesus’ public ministry. Three days after Christ’s crucifixion, Mary Magdalene arrived at Christ’s tomb, only to see it empty. Tradition holds that Mary Magdalene was the first person to see the resurrected Christ. Her story is often seen to be one a story of redemption, from a great sinner to a great saint.

Ristine moved to Magdala in October 2015, splitting her time between the ministry of the institute and Magdala itself, which includes a recently excavated synagogue and village, as well as a guesthouse and chapel. As a consecrated woman of Regnum Christi, she and three others dedicate their lives to living in community and bearing witness to Christ and his teachings through their ministry.

“Jesus’ public ministry was one of healing and of teaching,” Ristine said. “He heals the woman with the curved back … we see many layers of healing: physical, emotional, psychological, spiritual healings, and so we continue to ask the question, what role could we play as the Magdalena Institute in this?”

In 2015, at the suggestion of the Magdalena Institute’s media coordinator, Ristine and a group of women hosted a symposium around International Women’s Day, which is recognized annually March 8.

The first symposiums focused on “violations against women and some of the political or social endeavors that were taking place to help women who were violated,” Ristine said. Each year since, the institute has sponsored such a symposium for women of all religious backgrounds.

Ristine recounted the story of a Jewish woman who attended one symposium and was impressed by the women she met, each in various walks of life, practicing different religions, and coming together to share their stories.

“I think that is especially important when you’re living in a country like Israel, where there is a lot of tension among peoples and cultures,” Ristine said. “She could experience that in the same room as Arab Christians, Israeli Jews, Muslims, international Christians and Buddhists.”

Ristine said this is something she sees here — “women experiencing peace and also a sense of hope amid their own life situations, and it is just present here because it is the good news that Jesus offers us.”

A guesthouse is currently under construction, which will enable the Magdalena Institute to host longer conferences.

“It’s like an acorn seed right now, just there under the ground, we aren’t doing much, we’re letting it incubate,” Ristine said. “We’re offering a half-day retreat once a year, a one-and-a-half day women’s interfaith encounter, but there is a lot of potential, we just want to take it in the direction the Holy Spirit wants to take it and see how we can serve.”

PREVIOUS: Pre-synod meeting is a chance to change the world, youths say

NEXT: Brazilian bishop charged with stealing millions from diocesan donations