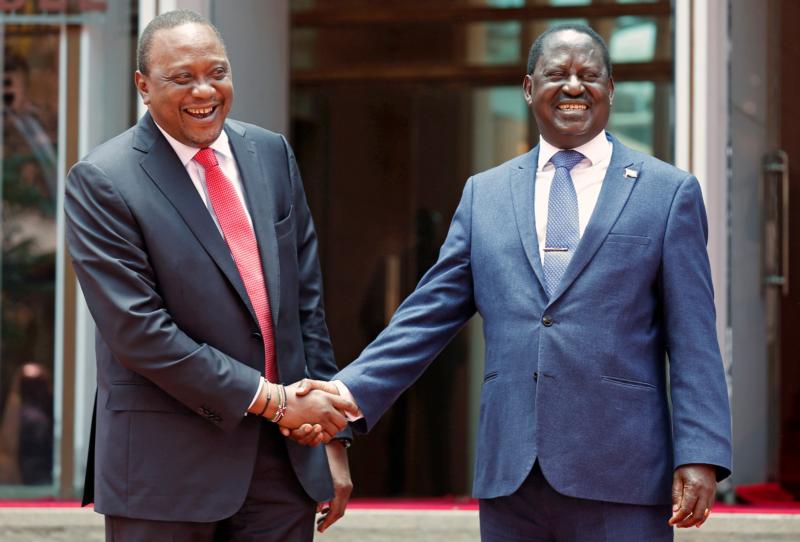 At a news conference March 14 in Nairobi, the bishops said the leaders’ action united and moved the country forward, following the violent and ethnically divisive electioneering period.

“This is a hand of God,” Bishop Philip Anyolo, chairman of the Kenya Conference of Catholic Bishops, told journalists. “God cannot be ruled out in what we are seeing. People have prayed and continue to pray for better times.”

On March 10, Odinga showed up at Kenyatta’s office for talks. He later declared that Kenyans could not remember why or where they disagreed. The differences, he warned, were entrenched into the third generation and were leaking into fourth one, now primary and secondary schools.

“As we fight to ostensibly save ourselves from each other, the reality is, we need to save our children from ourselves. My brother (Kenyatta) and I have therefore come together today to say this descent stops here,” he said.

Kenyatta agreed and said the country’s future must be dictated by prosperity, stability and well-being of the citizens.

“We have come to a common understanding, an understanding that this country of Kenya is bigger than any one individual,” said Kenyatta.

The bishops said this public reconciliation gesture was welcome relief to many Kenyans.

“We therefore laud this gesture and hope it is an opening to greater commitment toward seeking real solutions to a more just, democratic and prosperous country. … This gesture enhances our conviction that dialogue is possible,” Bishop Anyolo said in the bishops’ press statement.

According to the bishops, the gesture opens the path toward uniting and reconciling Kenyans, after very trying political moments. They urged the government to listen to all Kenyans and open discussions on issues that trouble the largely Christian country.

“We see the newfound collaboration of the two leaders as creating the environment for this dialogue,” said the bishops.

Analysts say after the reconciliation, the hard part starts. They cite as immediate issues, among others, the need to expand the power structure to accommodate more, investigating past violations, reforming the police force, and protecting civil liberties and media freedoms.

PREVIOUS: A monk in Mongolia: The historic journey of Benedict of Poland

NEXT: Human trafficking called ‘one of darkest, most revolting realities’ today