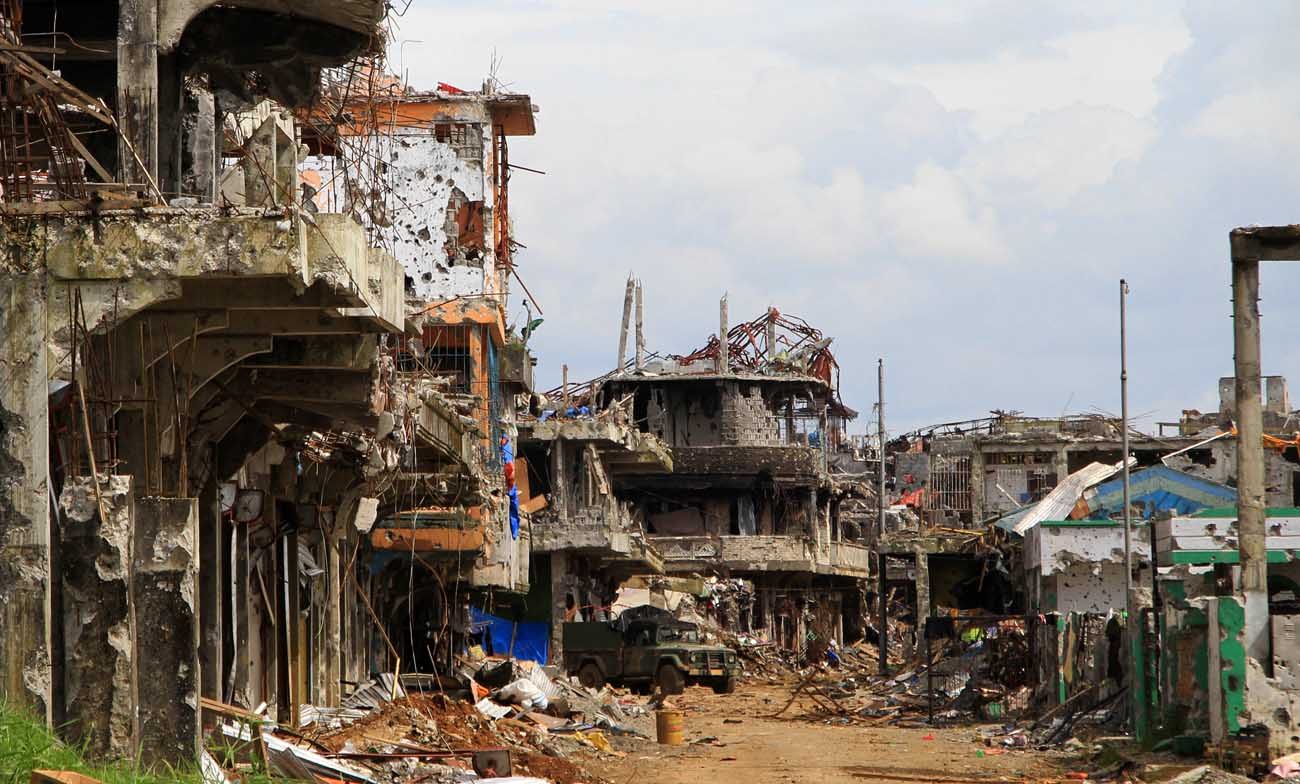 A military truck maneuvers next to destroyed buildings in the war-torn city of Marawi, Philippines. There will be no Holy Week observance this year in Marawi almost a year after extremist gunmen occupied the southern Philippine city. (CNS photo/Richel V. Umel, EPA)

MANILA, Philippines (CNS) — There will be no Holy Week observance this year in Marawi almost a year after extremist gunmen occupied the southern Philippine city.

The Catholic cathedral remains closed. It was desecrated and burned at the height of the five-month conflict that ended in October.

It was to be the first time that Holy Week has not been celebrated in the predominantly Muslim city, where more than 300,000 people remain in temporary shelters, ucanews.com reported.

Priests from nearby dioceses have volunteered to celebrate Masses on a university campus in the city.

Bishop Edwin de la Pena of Marawi assured Catholics in the region that other parishes not affected by the fighting will continue their ministries.

St. Mary’s Cathedral in Marawi was destroyed when Islamic State-inspired gunmen entered in May.

Even the vicar-general of the Marawi prelature will not be returning to the city soon. Father Teresito Soganub said he was still in “the healing stage” after his abduction by gunmen. “I won’t be able to go back to my regular ministry yet,” he said.

The priest became emotional as he recalled his four months in the hands of the insurgents.

“You face death every day. Sometimes it’s even every minute. You don’t know where the airstrikes will hit. … You wait for your death every minute,” he recently told journalists.

Father Soganub said his faith in God helped him survive his ordeal.

“If it was just me, I wouldn’t have been able to endure it. I believed in the presence of God. I always asked him to give me strength, not to leave me, and I knew he wouldn’t leave me,” the priest said.

Bishop de la Pena said several dioceses have offered to send priests to assist with ministry as well as provide other assistance to the prelature.

“I feel hopeful that people will help us rebuild the cathedral,” the bishop said, acknowledging, however, that his priority is “not the building but the needs of the community.”

Cardinal Luis Antonio Tagle, archbishop of Manila, has appealed to Catholics to donate to a Lenten evangelization and fundraising program to help dioceses in need.

Father Reginald Malicdem, rector of Manila Cathedral, said the money collected was to be used to serve disaster victims.

“This is a concrete way of doing a good deed and showing our love for our fellow men in this season of Lent,” he said.

Aid to the Church in Need launched a fundraising drive March 19 to help rebuild the church in Marawi.

Aside from raising money, the group said it aims “to create awareness of the reality and horrors of war” and show the effects of conflict on people.

NEXT: Mary, Mother of the Church should be celebrated this year, cardinal says