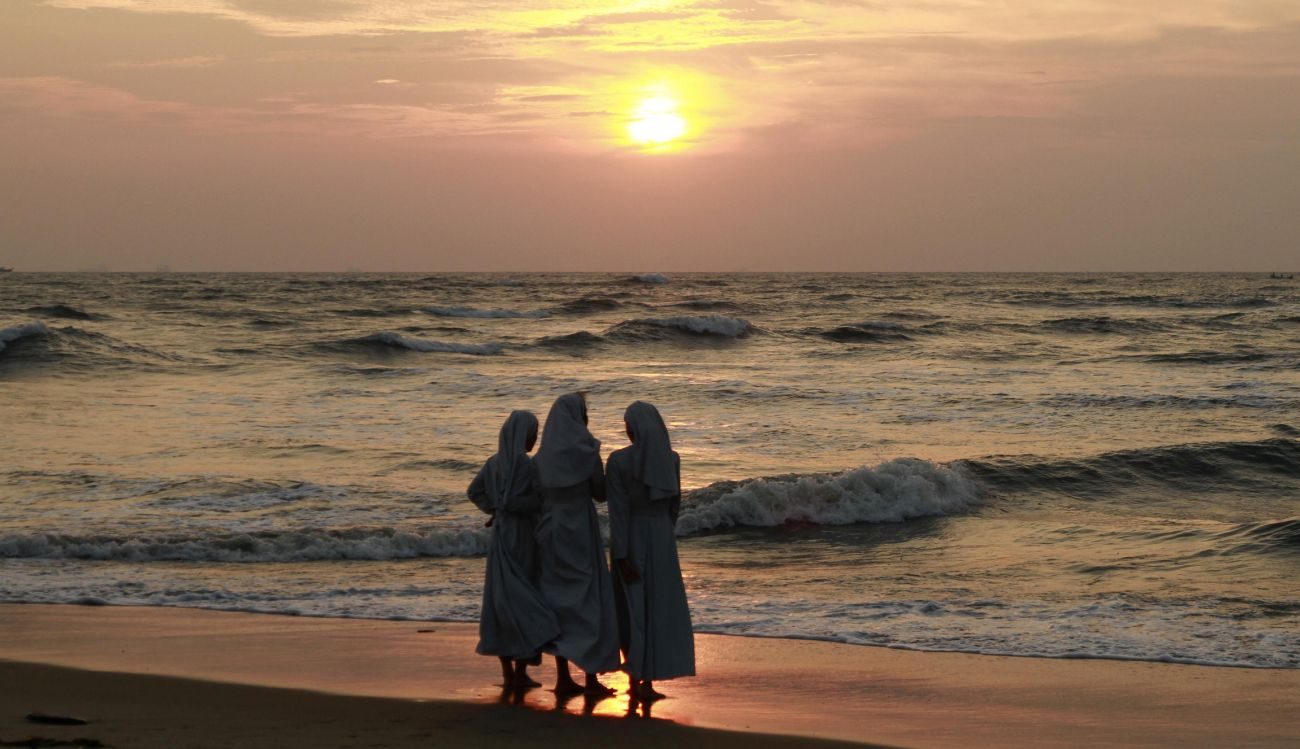 Nuns stand on a beach in Cochin, India, in this 2014 file photo. Misunderstanding the generous service and obedience of women religious leads to their being exploited and underappreciated, said an investigative report in a Vatican magazine. (CNS photo/Sivaram V, Reuters)

VATICAN CITY (CNS) — Misunderstanding the generous service and obedience of women religious leads to their being exploited and underappreciated, according to an investigative report in a Vatican magazine.

“Sisters are seen as volunteers that one can have available as one wishes, which gives rise to genuine abuses of power,” said a nun identified only as Sister Cecile.

Her testimony appeared in the monthly magazine, Women Church World, published March 1 in conjunction with the Vatican newspaper, L’Osservatore Romano.

Sister Cecile was one of three women religious interviewed — and given pseudonyms — by a French journalist based in Rome for the expose titled, “The (almost) free work of nuns.”

The article described how religious women often are chosen to provide the domestic services of cooking, cleaning and laundering for cardinals, bishops, parishes and other church structures, but with little or no little financial compensation to their religious orders, no contractual arrangements and no formal work schedule like laypeople would have.

“The idea that religious women don’t work with a contract, that they are there for good, that conditions are not stipulated,” Sister Marie said, creates situations marked by “ambiguity and often great injustice.”

The long history of religious congregations built on the spirit of freely serving and giving oneself for others has created for some people in the church the belief that compensation has no place “in the natural order of things for whatever service we offer,” Sister Cecile said.

The lack of financial compensation is a real and urgent problem, Sister Paule said, because how else are women religious communities to find the resources needed to support their members, their formation and health care.

Even priests ask the sisters for a nominal donation for saying Mass at their chapel, Sister Cecile said, noting she now specifically requests compensation for speaking engagements.

A lack of recognition or respect is also a problem, the three women said, as it often seems their work is considered less valuable or appreciated than that of consecrated men.

Sister Marie asked how a priest can let a woman religious serve him his meal at a table and then “let her eat alone in the kitchen once he has been served.”

“Is our consecration not the same as theirs,” she wondered, noting how consecrated women and nuns “almost always” end up as the domestic workers for consecrated men.

“Behind all of this, unfortunately, there is still the idea that women are worth less than men and, especially, that a priest is everything while a sister is nothing in the church. Clericalism kills the church,” Sister Paule said.

She recalled a sister who served one place for 30 years and when she fell ill, “not one of the priests she served went to visit her,” adding that often the women are moved around “as if we were interchangeable.”

Assignments also may not take advantage of a woman’s qualifications, Sister Paule said, explaining that she knew sisters with doctorate degrees in theology who were assigned cooking and cleaning jobs “without explanation.”

The women’s orders themselves can contribute to the problem, Sister Marie said. For example, she said, mother superiors sometimes keep a sister from advancing in a particular profession as a way to head off an emphasis on an individual and reinforce the importance of the community.

Women religious from poorer countries may be afraid to speak up, Sister Marie said, if they feel indebted to their community for its support of them or family members back home.

“Some say they are happy, they don’t see the problem, but they still feel intense strain,” while others may turn to sedatives to cope, she added.

“Sometimes people criticize religious women, they look closed off, their personality. But behind all of that are many wounds,” Sister Cecile said.

Sister Marie said it can be a spiritual struggle for some women because “Jesus came to free us and we are all children of God in his eyes.”

“But some sisters don’t live this in real life and they experience great confusion and deep discouragement,” she said.

The author said some religious women think their vows of poverty and obedience could become a richness for the church only if “the male hierarchy would see this as an occasion for a true reflection about power.”

PREVIOUS: Irish bishop resigns after criticism of his treatment of abusive priest