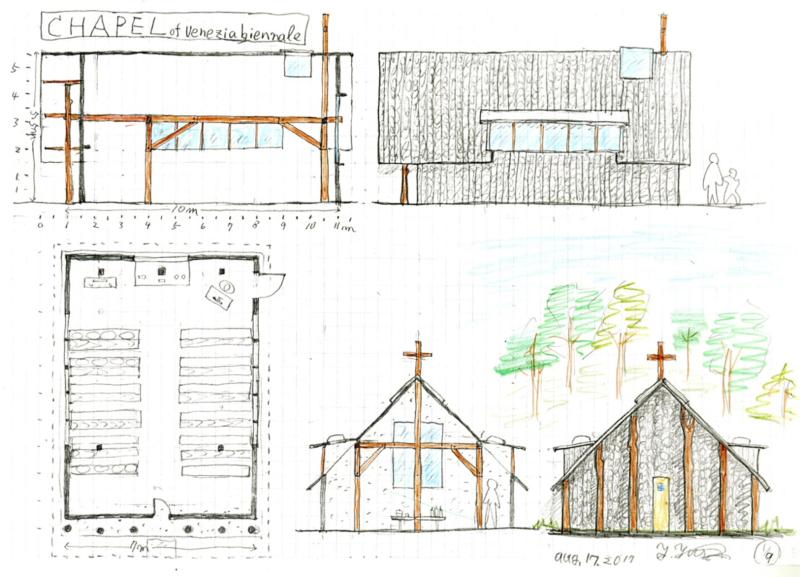 This is a sketch of a wooden chapel designed by Terunobu Fujimori, a Japanese architect. It is part of the “Biennale di Venezia” International Architecture Exhibition, which runs May 26-Nov. 25 in Venice, Italy. (CNS photo/handout)

VATICAN CITY (CNS) — For its debut at the “Biennale di Venezia” International Architecture Exhibition, the Vatican commissioned 10 renowned architects from around the world to turn a small wooded plot on an island in the Venetian lagoon into a spiritual-artistic pilgrimage of chapels.

The initiative is yet another major effort in the long journey of repairing an unnecessary, “lacerating divorce” between art and faith, Cardinal Gianfranco Ravasi, president of the Pontifical Council for Culture, told reporters March 20.

Over the last century, “art had left the temple; the artist had placed the Bible on a dusty shelf,” he said, while the church tended to blindly copy past styles, or worse, “adapted to the ugliness that pervades the new urban suburbs,” building places of worship devoid of spirituality and beauty.

Artistic expression and religious inspiration are more like “sisters,” he said, and the two, which had become strangers, need to come together again in mutual respect and dialogue.

One of the ways of doing that had been participating in the Venice Biennale for art in 2013 and 2015, and the international showcase for architecture became the next goal “we insistently set for ourselves,” the cardinal said. The Holy See is one of seven nations participating for the very first time; the others include Saudi Arabia, Mongolia and Pakistan.

The theme of this year’s exhibition, which runs May 26-Nov. 25, is utilizing nature’s gifts of light, materials and “free space” on a fragile planet.

With that theme, the Vatican picked the “woodland chapel” by the late Swedish architect Gunnar Asplund as a model, Francesco Dal Co, the curator of the Holy See pavilion, told reporters. The simple chapel built in 1920 sought to create harmony between the pyramid-shaped building and the surrounding landscape of triangular-shaped pines.

All 10 architects the Vatican approached agreed to the project, which came only with the suggestion they build a chapel “isolated” from other buildings and in tune with its natural surroundings, Dal Co said in written comments. Each unconsecrated chapel was also to have a lectern and an altar, Cardinal Ravasi said.

Among the noted architects are Andrew Berman of New York, Norman Foster of London and Sean Godsell of Melbourne, Australia.

Foster, who most recently designed Apple Inc’s corporate headquarters, Apple Park, in Cupertino, California, used steel beams set like giant crosses, which are then covered, tent-like with fabric. Godsell, known for designing the “Future Shack” for emergency and transportable housing, designed a chapel using ultra-light ceramic panels that can be dismantled and easily set up elsewhere for a place of worship on the move, using his knowledge of Jesuit missionaries as his inspiration, Dal Co said.

Cardinal Ravasi said participating in this new “biennale” fits nicely in Pope Francis’ call in “Evangelii Gaudium” to evangelize by understanding and upholding the “inseparable bond between truth, goodness and beauty.”

The cardinal cited the pope, “We must be bold enough to discover new signs and new symbols, new flesh to embody and communicate the word, and different forms of beauty which are valued in different cultural settings, including those unconventional modes of beauty which may mean little to the evangelizers, yet prove particularly attractive for others.”

NEXT: Pope confirms plans to attend World Meeting of Families in Dublin