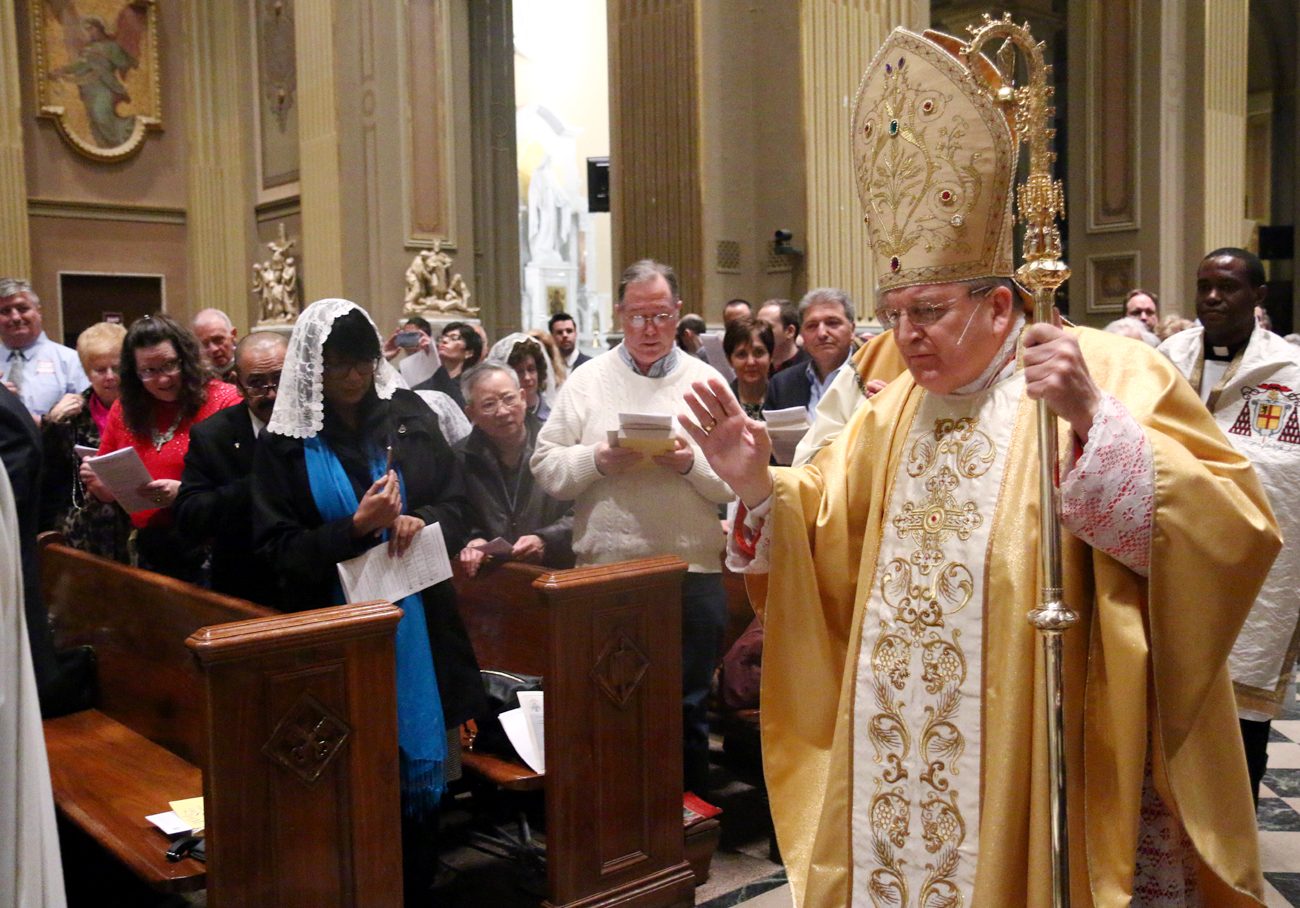 Cardinal Raymond Burke processes into the Cathedral Basilica of SS. Peter and Paul April 21 for the closing Mass of a conference, "Matrimony, Rediscovering its Truth,” sponsored by the St. John Neumann Chapter of Catholics United for the Faith. (Photo by Sarah Webb)

Approximately 400 Catholics gathered at the Cathedral Basilica of SS. Peter and Paul on April 21 for a conference, “Matrimony, Rediscovering its Truth,” sponsored by the St. John Neumann Chapter of Catholics United for the Faith (CUF).

Keynote speaker for the conference was Cardinal Raymond Burke, archbishop emeritus of St. Louis, prefect emeritus of the Apostolic Signature at the Vatican and a former patron of the Sovereign Military Order of Malta.

Cardinal Burke is most noted recently as a critic of some aspects of Pope Francis’s 2016 apostolic exhortation, “Amoris Laetitia” (The Joy of Love), which he maintains could open the way for such practices as admission to the Eucharist to divorced and remarried Catholics who have not had their previous marriage annulled. His topic was “Holy Matrimony: Sacrament of Christ in His Church.”

Also speaking at the conference was Cathedral Rector Father Gerald Dennis Gill, whose topic was “The Liturgy of Marriage Reveals the Truth of Marriage.”

An afternoon speaker on the topic of “Catholic Teaching on Marriage in the Code of Canon Law” was Father Gerald E. Murray, a canon lawyer and pastor of the Church of the Holy Family in New York City.

In addition to explaining the Code of Canon Law, which has well over 100 canons on the topic of marriage, he quoted extensively from the 1992 Catechism of the Catholic Church. He reviewed especially paragraph 1650 of the catechism, which covers the topic of Catholics who divorce and remarry without an annulment of the first marriage, referring to the practice as adultery and a bar to receiving the Eucharist. 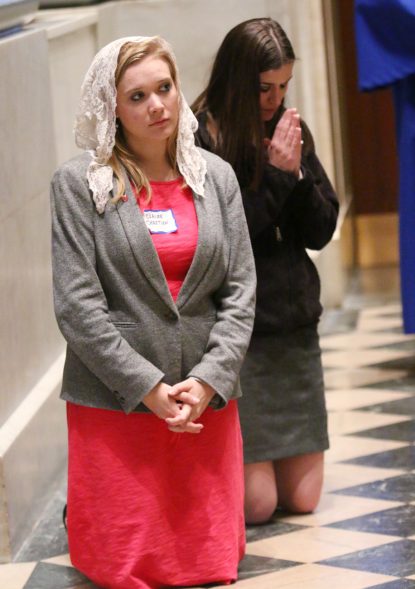 Claire Chretien from Washington, D.C., and Angela Erickson from Buffalo, Minn., pray while waiting for the sacrament confession at the Cathedral Basilica of SS. Peter and Paul, Philadelphia. (Sarah Webb)

The day also included a Marian procession, featuring the National Pilgrim Virgin Statue of Our Lady of Guadalupe, followed by the recitation of the rosary.

In the day’s closing Mass, which was preceded by a Eucharistic holy hour, Cardinal Burke preached on the Scripture texts of the Mass.

“It is in Christ alone, in communion with him following the unchanging teachings of the Church,” he said, “and worshiping God in spirit and truth will we find peace in this life and anticipate the eternal peace of the world to come.”

“It’s been a beautiful day of inspiration, information and spiritual formation,” commented Anne Wilson, the chief organizer of the event for CUF. “It’s been very gratifying with people coming from all over to attend it.”

PREVIOUS: It’s first Communion season; why not recycle that dress or suit?

NEXT: Volunteers honored for giving thousands of hours to serve others