Volunteers honored for giving thousands of hours to serve others 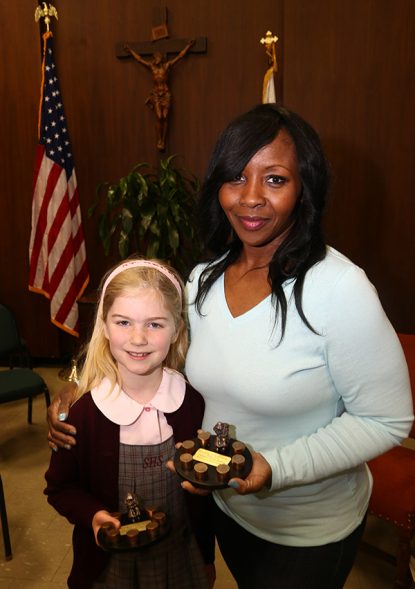 Mary Quinn Forbes (left) and Gloria Llanos-Divon display the commemorative plaques they received at an April 20 ceremony honoring the more than 4,100 volunteers who support the work of Catholic Social Services in the Archdiocese of Philadelphia. (Photo by Sarah Webb.)

When her mother died last year, Gloria Llanos-Divon was heartbroken — and in the midst of a divorce.

On the advice of a friend, she sought assistance for herself and her three daughters at Martha’s Choice Marketplace, an outreach of Catholic Social Services of the Archdiocese of Philadelphia.

The Norristown-based pantry, the largest of its kind in Montgomery County, provides emergency food and serves as the portal for a larger array of support offered by Catholic Social Services (CSS), such as nutritional education, resume writing and parenting classes.

Inspired by the staff’s warmth and compassion, Llanos-Divon soon began volunteering at Martha’s Choice. On April 20, she and more than 30 other CSS volunteers were honored for their contributions during a ceremony at the Archdiocesan Pastoral Center in Philadelphia that marked the close of National Volunteer Recognition Week.

Auxiliary Bishop John J. McIntrye, who oversees the secretariat for Catholic Human Services, blessed the volunteers, adding that “their daily efforts — giving their best to treasure the dignity of all God’s children — invite us all to do whatever we can to share in that mission.”

James Amato, secretary for Catholic Human Services, noted that those present represented more than 4,100 volunteers, who provided a combined total of over 81,000 hours of service to the archdiocese’s works of charity last year.

“The numbers are really impressive, but equally so are the faces and stories behind them,” Amato said. “These volunteers demonstrate a tremendous commitment to the faith, one that embraces people of all ages.”

The youngest volunteer to be honored was Mary Quinn Forbes, a second-grade student at St. Helena School in Blue Bell. Realizing that “people couldn’t play in the snow if they weren’t able to stay warm,” Forbes asked friends to bring hats and scarves, rather than gifts, to her birthday party. She and her family then donated the items to the CSS Family Services Center in Norristown.

Several of the volunteers began serving in CSS ministries after retiring from full-time careers. For 10 years, Sister Marliene McCarthy, S.S.J., had worked at Women of Hope, a CSS initiative with two Center City locations that provide shelter and care to homeless women with mental illness. Having been “formed, transformed and reformed by the wonderful residents there,” Sister McCarthy returned to volunteer at the outreach, where she now welcomes guests and assists with preparing and serving meals.

At the recognition ceremony, volunteers were presented with a commemorative plaque that included a miniature version of “Homeless Jesus,” the internationally renowned statue designed by Canadian artist Timothy P. Schmalz. The choice of image recalled the life-size variation that in August 2017 was installed at St. John’s Hospice, a CSS ministry that serves homeless men in Philadelphia.

The plaque also included the words of Matthew 25:35: “I was a stranger, and you welcomed me.”

For Llanos-Divon, the Gospel verse recently took on a deeper meaning. While restocking the pantry at Martha’s Choice earlier in the month, she met a woman who was struggling to cope with the death of her mother.

“She felt lost, and I knew exactly where she was coming from,” said Llanos-Divon. “I told her she’s not alone, because at first I thought I was alone — but you’re never alone. You really are never alone.”

NEXT: Seminarians mix it up with area young adults for Frisbee fun