A painful history strengthens bond of church in the U.S. and El Salvador 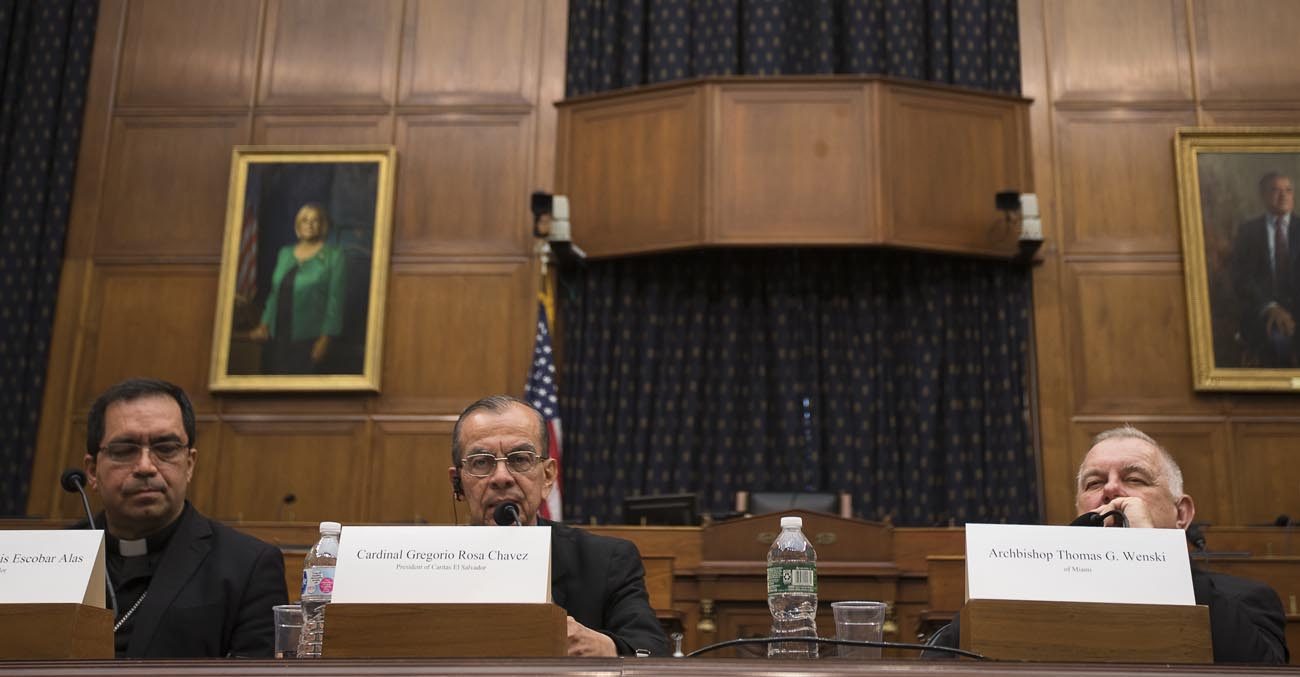 WASHINGTON (CNS) — In the halls of Congress, they stood side by side, a prominent archbishop from the U.S. with a delegation of four high-ranking Salvadoran prelates in tow, including the first cardinal in the country’s history.

They were there speaking to U.S. lawmakers, as Miami Archbishop Thomas G. Wenski emphatically put it, “with the same voice.”

Together they traveled the halls of Congress lobbying members in early April, aiming to get politicians on both sides of the aisle to restore protections that would allow two groups of Salvadoran immigrants to continue to stay and work in the country legally. It was the latest moment in a history of bringing together the hierarchy of the U.S. Catholic Church and its Salvadoran counterparts.

“We’ve spoken with the same voice for a long time. We’ve had a historic relationship that goes back years, decades,” Archbishop Wenski said during an April 13 event on Capitol Hill to advocate for beneficiaries of the Temporary Protected Status and Deferred Action for Childhood Arrivals programs.

In the 1980s and 1990s, that meant speaking out against U.S. military aid, which not only prolonged the war in El Salvador but, in some cases, funded operations that resulted in the killing and persecution of civilians, among them many Catholic Salvadorans.

“We asked permission, we tried to speak for them here (on Capitol Hill) … so that the voice of the bishops of El Salvador, which is the voice of the people, could be heard,” Archbishop Wenski said.

A March 13, 1982, article by United Press International said Archbishop John R. Quinn of San Francisco, who was then president of the National Conference of Catholic Bishops/U.S. Catholic Conference, told his counterparts in England and Wales “he had personally intervened with President (Jimmy) Carter in an effort to end U.S. military aid.” The archbishop urged them, too, to intercede on behalf of the Salvadoran church with the British government.

Bishop Thomas C. Kelly, who as general secretary was spokesman for the U.S. bishops’ conference, also made numerous public denunciations to those in power in Washington opposing U.S. military aid to the Central American nation. Just as they are doing now, bishops in the U.S. then were speaking “with the same voice” as the church in El Salvador. The voice then was tethered to San Salvador’s Archbishop Oscar Romero, whose pleas for a stop to the violence were answered with death and martyrdom March 24, 1980.

“Both publicly and privately, U.S. church officials make clear that their opposition to U.S. arms for the current Salvadoran government stems from the Salvadoran church’s opposition,” UPI wrote in the 1982 article.

Like Archbishop Romero, Bishop Kelly in the U.S., too, spoke of the burden the war had added to the poor of the country and that had resulted in the deaths of peasants, laborers, teachers.

“Violence visited almost daily upon the poor and suffering people of El Salvador is an ever-growing source of grief to us,” Bishop Kelly said to a group of Catholic groups and media, according to a Catholic News Service story from Nov. 10, 1980. “The church has shared fully in the suffering; it has made unmistakably clear its preferential option for the poor … accompanying the people in their hope, struggle and suffering. It has paid dearly for this commitment.”

Within days, the church of the U.S., too, would pay dearly for its commitment to the struggling nation when four U.S. Catholic women were raped and killed there Dec. 2, 1980.

During this year’s April trip to Washington, Archbishop Jose Luis Escobar Alas of San Salvador, continuously spoke of the four American Catholic women and included them in his second pastoral letter dedicated to Salvadoran martyrs published in March 2017. As U.S. clergy were denouncing in Washington the deaths of Salvadorans, Salvadoran clergy, too, were denouncing the deaths of the American women to authorities in their country. Even after the killings, the involvement of the U.S. Catholic Church didn’t end there — and wasn’t limited to the hierarchy.

More personally, some took in Salvadorans fleeing the violence. They took in “the suffering people of Romero,” said Sonia Umanzor, community affairs director for the Salvadoran Embassy in Washington. In 1981, she arrived in the U.S. capital seeking refuge and found safety through the sanctuary movement, a network of faith communities that provided food and shelter for refugees fleeing the violence in Central America.

The help of the Catholic Church in the U.S., at the level of the clergy and laity, along with other religious groups, were the “mysterious hands” that helped Salvadorans fleeing the darkness of a war their government had supported, she said.

“The hands of those (spiritual) men and women were with us,” she said in an April 18 interview with CNS. “It was like a miracle, having those people around us committed to justice and healing.”

Even as they’ve shared difficulties, the churches from both countries, too, have shared in positive milestones.

When the pope announced El Salvador would have its first cardinal in history, San Salvador’s Auxiliary Bishop Gregorio Rosa Chavez in June 2017, the cardinal-to-be chose a U.S. Capuchin priest from Washington, Father Moises Villalta, as his personal secretary for the ceremony, saying the U.S. was El Salvador’s 15th”department,” a geographic designation equivalent to a state.

At the parish level, places such as Holy Trinity Catholic Church, in Washington’s prominent Georgetown neighborhood, also say they’ve been enriched spiritually by their contact with the church in El Salvador.

During the country’s war, Holy Trinity established a sister-parish relationship in 1989, one that continues almost three decades later, with Maria Madre de los Pobres (Mary Mother of the Poor) Church in San Salvador. One of the Washington parishioners who first pushed for the sister-parish relationship argued then that “when you’re in El Salvador, it’s like being at the foot of the cross,” remembered Jean Johnson, who has been involved with the effort over the years.

Holy Trinity parishioners visited the parish during the war, raised funds for the construction of the main church building, tried to be “a presence” of the American Catholic Church, accompanying Salvadoran Catholics as they struggled during the conflict, Johnson said.

Some have served over the years as international observers to elections in the country. Back and forth visits, as well as social programs backed by Holy Trinity, continue today.

During the April visit by the Salvadoran prelates, Holy Trinity parishioners, as well as priests and women religious from the U.S., showed up on Capitol Hill to advocate for a different set of challenges: voicing their support for TPS and DACA recipients and supporting the voice of the bishops, who said a mass return of the beneficiaries of the immigration programs would pull the country into an even bigger crisis.

They asked the Salvadoran prelates what more they could do to help El Salvador with the current challenges it faces: gang violence, poverty, environmental problems.

The solutions are difficult and the origins of the problems are rooted in a long history of injustice, the archbishop of San Salvador told them, and yet the Catholic Church of the U.S. has always been there for support, even at personal risk, during the worst of times.

“We want to thank the church in the United States,” he said. “God will repay you for supporting us.”

NEXT: Catholic, other groups voice misgivings over 2018 farm bill