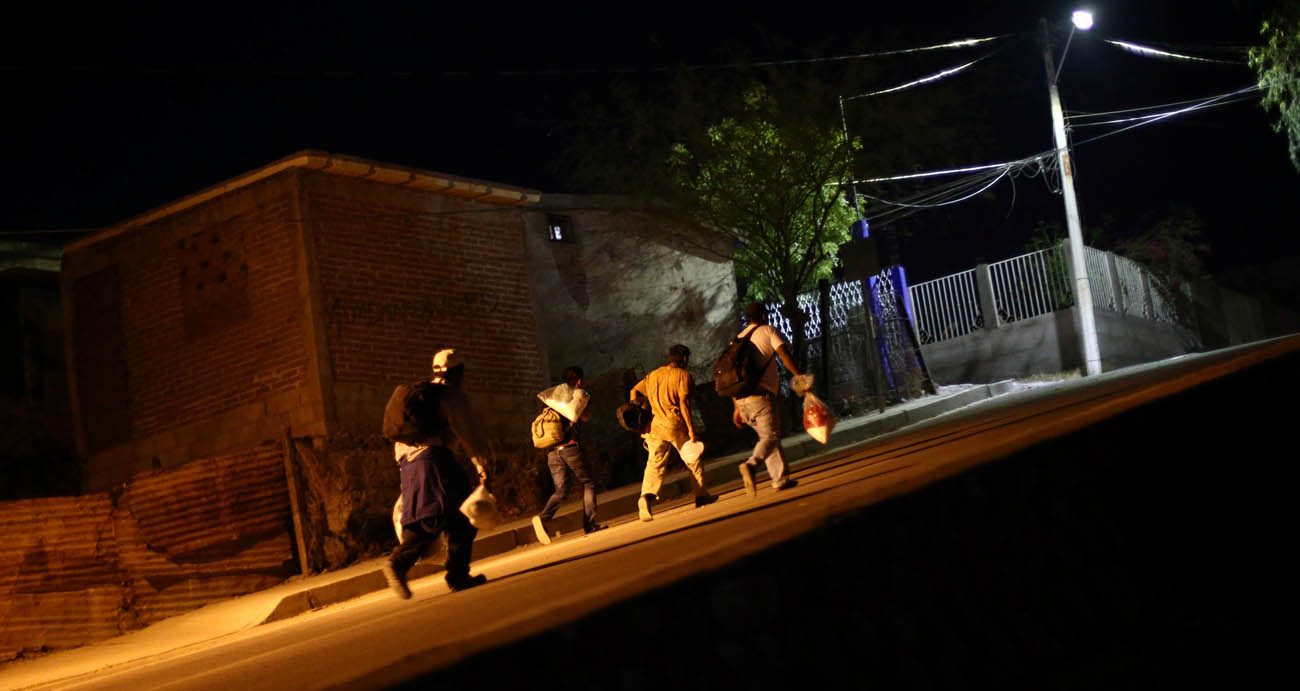 Central American migrants move along a street in Hermosillo, Mexico, April 23. Newark's Cardinal Joseph W. Tobin said in April 23 podcast by New York's Center for Migration Studies that he's worried that reducing the number of immigrants, particularly refugees to the U.S., and demonizing them represents a "hardening of the American heart." (CNS photo/Edgard Garrido, Reuters)

WASHINGTON (CNS) — Newark Cardinal Joseph W. Tobin said he worries that reducing the number of immigrants, particularly refugees to the U.S., and demonizing them represents a “hardening of the American heart,” and that should be of concern to a country that has been historically a welcoming place.

The country’s iconic Statue of Liberty “is welcoming people because of who they are and not seeing them simply as objects of charity, but as potential contributors to this experiment that is the United States of America,” Cardinal Tobin said in the CMSOnAir podcast aired April 23 by New York’s Center for Migration Studies. “We should be concerned about the success that some voices in the public square have had in demonizing the other.”

In the interview with Donald Kerwin, the center’s executive director, Cardinal Tobin expressed worries about sentiments popular around the country at the moment, including some that paint certain groups of immigrants as rapists, drug smugglers or as people intent on taking jobs away.

“All of which aren’t true,” he said. “And people forget that they’re part of families. They love their children. Many of them are here at great sacrifice leaving behind their families, their wider families, so that they can provide for their children. I think what religious leaders can do is help people understand, because if you can put a face on someone, it’s much more difficult to do really inhuman things to them.”

It’s similar to what happened to the Irish and other communities that arrived in the U.S. in the past, he said, when they were painted in extremely unflattering ways and yet they contributed to the country.

“We should ask why we want to become so ethnocentric. I don’t think the word xenophobic is too strong to describe some of the caricatures that are proposed to Americans. I want to believe that Americans are smarter than that and that their hearts are bigger,” he said.

While many Christian immigrants are being affected by some of these events, other Christians shouldn’t exclusively help them but try to help everyone who is suffering even though it’s true that “the people who are being deported include great numbers of Christians.”

“My hometown of Detroit, Michigan, has a large Chaldean community, which is being eviscerated by ICE,” he said, referring to the Department of Homeland Security Immigration and Customs Enforcement.

When asked whether people of good faith can disagree on immigration and other issues that the church advocates for as matters of prudential judgment, not doctrinal issues, Cardinal Tobin said that, “if prudential judgment simply means or reduces the question of the help to undocumented peoples or immigrants as matters of secondary concern, I think that that’s wrong.”

“I think that is a misrepresentation of some of the fundamental principles of the church’s social doctrine,” he further explained. “Certainly, the capricious nature of the laws and the enforcement of laws around immigration is an offense of human dignity. It is a wound to the common good. So, yes, I don’t have a whole lot of time for people who reduce things to prudential judgement. I’ll listen to everybody, but I think that there is more of a self-fulfilling prophecy to justify the present chaos.”

He said he’s not opposed to borders or thinks they “are necessarily wrong.” But he said that “when they achieve almost an idolatrous force that they become so sacred that you would close your eyes to the needs of people who come across the border seeking a better life or help or when they reduce human dignity to a caricature or when they break the fundamental solidarity that we owe even across national or cultural borders, then I think as believers, we have to question that.”

People should never forget where their family came from, he said, or the challenges they and other immigrants of the past faced — whether they did or did not enter the U.S. legally.

“They were all lumped into the same offensive group,” he said. “I think that remembering that and remembering that out of those immigrant communities came people like Marconi, who gave the radio to the world, and Enrico Caruso, and all of these people who enriched our nation’s lives in so many ways, that’s one thing, is to remember. Secondly, is to listen to your faith before you listen to a particular ideology. God is pretty clear. He doesn’t favor one nation over another.”

The world’s main religions counsel strongly against persecuting the stranger, he said, and that’s “because God himself identifies in a very real way with those who are foreigners among you.”

Even if immigrants are facing a particularly difficult time, Cardinal Tobin said he reminds them to always remember and repeat that Christ is risen.

“And his resurrection wasn’t simply a far-off historical fact, it is the judgment of God on death and suffering, that it doesn’t have the final word,” he said. “And so I would say that’s going to be true in the lives of these people as well.”

God is a God of justice, he said, and “will ultimately transform the suffering into a better world, not only for these immigrants, but for the United States of America.”

NEXT: Bishops throw support behind another bill to protect undocumented youth