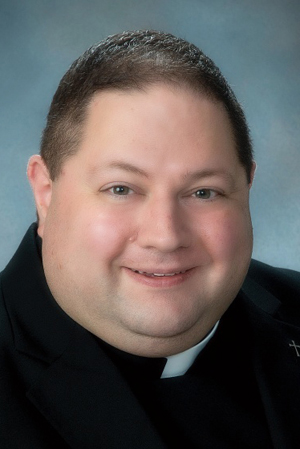 Although Transitional Deacon Brandon Artman will be ordained a priest by Archbishop Charles Chaput at the Cathedral Basilica of SS. Peter and Paul on May 19 at age 38, rectories and parish liturgies have been part of his life since his teen years.

The son of Glenn and Rose Artman, he was raised in St. Agnes Parish, West Chester, along with his younger sister, Andrea. He attended St. Agnes School, West Chester East High School and West Chester University, where he majored in music education.

From childhood he was involved in music first with the children’s choir and the adult choir, also answering telephones in the rectory and serving as sacristan.

At one point a parochial vicar suggested God might be calling him to the priesthood. “Father, I didn’t have a message on my answering machine,” was Brandon’s light-hearted reply, although he concedes, “Maybe that planted the seed but I might have been fighting it.”

During his years at West Chester University he began attending St. Matthias Parish in Bala Cynwyd where he was hired as music director. He ultimately left college to become music director and parish services director.

Although Brandon would eventually obtain his degree, his focus at the time was his music, both vocal and instrumental. “I was using the talents God gave me to serve his people through music,” he said.

Sure, the priesthood or marriage had entered his mind, but he was content with just doing his own thing.

That continued for a long time, at least until something that happened while Brandon was visiting a friend who was a transitional deacon in another diocese. His friend was making Communion calls, and he suggested Brandon, who was also an extraordinary minister of holy Communion at St. Matthias, give him a hand and he readily agreed.

They visited a nursing home and when Brandon knocked and entered the room of an elderly resident, she was sobbing. “Are you OK? Can I help” he asked.

“Why did they put me here?” she cried. “My family doesn’t love me anymore.”

“I’m sure your family loves you a whole lot and they couldn’t take care of you. That’s why they brought you here,” he reassured her.

As he kept consoling her she calmed down. After he gave her Communion, she asked, “Are you a priest?” When he replied he wasn’t, she said, “I think you should be because I heard Jesus speaking to me through you.”

That was in 2012 and on Ash Wednesday, just after playing the music for Mass at St. Matthias, he received word from Father Kevin Gallagher, the archdiocesan vocations director at the time, that he was accepted.

Through his parishes and the seminary he came across many role models along the way. At St. Agnes there was Msgr. Thomas Craven. “He was a stern Irishman who knew what he wanted but you could see his love for the priesthood,” Deacon Artman recalls.

At St. Matthias, it was Msgr. Arthur Rodgers who hired him and he became a priestly example through the way he could balance everything in his life.

At St. Charles there were many others, including his fellow seminarians. Not all stayed. “Father Pat Welsh, who was our dean, told us, “even if you discern out that is a successful discernment. You will come out a better person no matter.”

More recently Father Chris Redcay at St. Patrick Malvern, where he served his deacon assignment, “taught me how to be pastoral, to give the people what they needed,” he said.

Sure, there were bumps along the way for him. “I think it is just the devil trying to dissuade you,” he said.

One special joy that has come from his vocation is the conversion of his father to Catholicism. He was a Christian but not active in his faith and a few years ago he expressed the desire to receive Communion from his son at ordination.

Brandon explained it wasn’t that easy. He had to want to be Catholic and believe what Catholics believe. This year his dad was received into the church at St. Matthias, and did receive Eucharist from the hands of his deacon son.

Now very soon he will receive it again, but from the hands of his priest son.

PREVIOUS: Through a youth group and a magazine, man hears God’s call

NEXT: Music stirred his heart, led him to cusp of priesthood