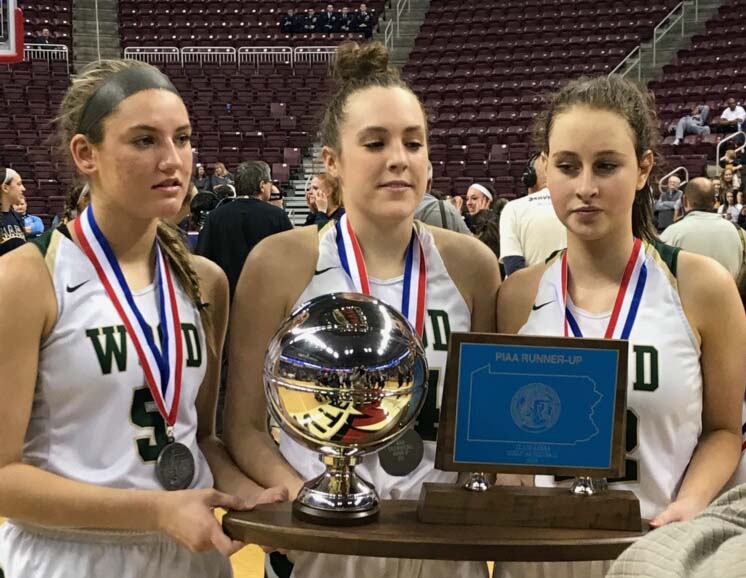 Archbishop Wood girls’ basketball coach Mike McDonald stood outside the locker room and did a lot of interviews, sometimes answering the same questions.

He handled every one of them with class.

McDonald’s players emulated their coach’s good sportsmanship. It began with forcing a smile when handed the runner-up trophy and then clapping for their opponents as they watched them receive gold medals, just like the ones they had earned each of the past two seasons.

So while Archbishop Wood’s coaches and players lost a heartbreaking 36-33 contest against Mars Area High School in the PIAA Class 5A girls’ basketball state championship March 28 at the Giant Center in Hershey, Pa., they proved they were winners where it counted most.

“Standing there watching them celebrate, you have to tip your hat,” said McDonald. “You have to say congratulations. They deserved that. They won the game.”

Wood (22-8) outplayed Mars (23-6) defensively, outrebounding them by 30-28, stealing seven passes, blocking four shots, and causing 13 turnovers. Shooting, however, failed the Vikings as they connected on just 11 of 43 overall, 5 of 20 from three-point territory, and 6 of 10 from the line.

“We had a lot of positive moments this year,” said Arcidiacono, who led all rebounders with seven, one more than Morgan. “I hope we’re not remembered by this one game.

“Obviously it really stings when you get this far and then fall a little bit short … just one play short. But I think overall we’ve had a really positive season and we’ve had some big wins that we didn’t expect to have.”

The Vikings will get hit hard by graduation but will return five players who participated in the state final.

“We worked hard all season and got to the championship game even though we didn’t come out with the win,” said junior Annie Whalen. “We will come back stronger and get it next year.”

“Losing was very hard,” said Tretter, “but I know that if we work just as hard as we did this season, we can get back again next year and hopefully win it all.”
***