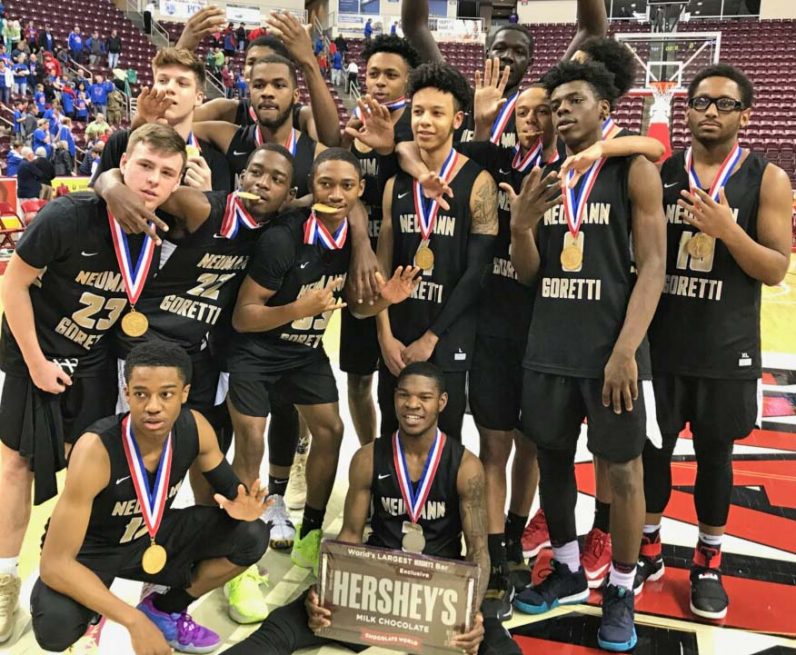 An electric performance by Dymir Montague led Neumann-Goretti to an impressive 57-42 victory over Richland in the PIAA Class 3A state championship March 28 at the Giant Center in Hershey, Pa.

The Holy Family University-bound senior poured in 23 points, snared six rebounds, stole five passes, and blocked four shots. He shot 7 for 15 from the floor, 4 of 6 from three’s and 5 of 6 from the foul line while rest of the team struggled at 14 for 35, 2 of 15, and 4 of 9, respectively.

“I was feeling good the whole game,” said Montague. “It was a good flow. The team was playing well. We were confident. We weren’t going to lose.”

“He was pretty big for us,” said Arrigale. “He wanted to end it the right way.”

The Saints (23-6) employed a methodical approach to their willing, but overmatched, opponents in the state tourney. 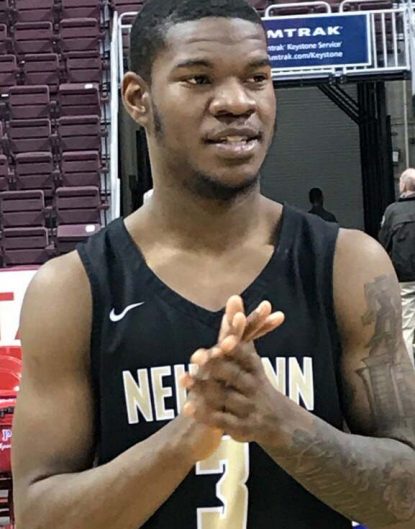 Dymir Montague carried the Saints with a hot hand, scoring a game-high 23 points, in the 57-42 PIAA Class 3A championship victory March 28 over Richland.

Montague then nailed five of six free throws down the stretch and finished as the Saints’ lone double-figure scorer, a surprising statistic since four different Saints had scored five or more points. The 6-foot, 3-inch wing guard scored 15 of N-G’s 27 second-half points.

“I wanted the ball, and my teammates did a great job getting me some open shots,” said Montague. “Everything was working.”

Neumann-Goretti has now captured five straight state titles — a record for any basketball program since the state tourney began in 1920. For Neumann-Goretti and the rest of the Catholic League, participating in the post-season began in 2009. The Saints have dominated, winning eight titles in the past nine years.

“Some say it looks like it’s easy, but there’s nothing easy about it,” said Arrigale. “It’s a long season. This one has been especially long.”

The PIAA tournament had been scheduled to conclude on March 24, but bad weather necessitated re-scheduled practices and games. 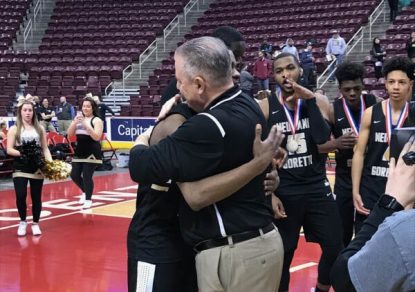 Coach Carl Arrigale right) shares a congratulatory hug with his star player, Dymir Montague, who is headed to Holy Family University in the fall.

“It’s easy to lose concentration,” said Arrigale. “It’s only natural to get tired of the grind. Practices weren’t high on the list for what the kids wanted to do. In our case, we reminded the players that we could make history, reminded them that our goal was to go out the ‘right way.’”

“I definitely learned a lot,” said Warren. “It helped me by playing against some of the best competition around and also winning championships, and even losing some.”

Overmatched opponents throughout the state might not understand what Warren is referring to. Neumann-Goretti’s basketball team losing in the PIAA tournament? Good luck with that.