CNEWA trustees meet Lebanese, refugees who benefit from their projects 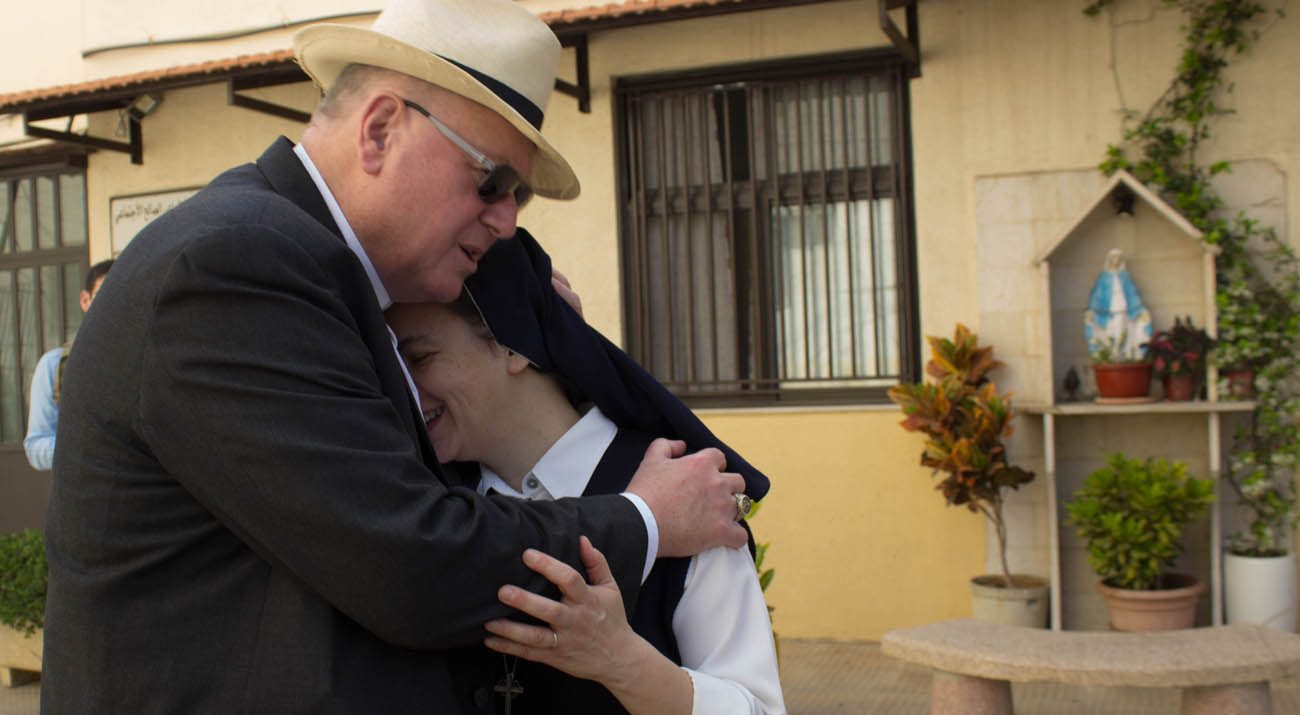 BEIRUT (CNS) — A North American delegation negotiated the steep incline to a clinic draped over the roadway, like an olive tree from a limestone bluff.

“Yesterday we prayed,” said New York Cardinal Timothy M. Dolan, who the day before attended a Mass with refugees. “Now we work.”

Cardinal Dolan, chairman of the board of Catholic Near East Welfare Association, led a delegation from CNEWA, including Archbishop J. Michael Miller of Vancouver, British Columbia, and retired Bishop William F. Murphy of Rockville Centre, New York. The group who visited health care facilities across the Lebanese capital April 16.

Arriving by bus and after a brief climb, the prelates reached St. Anthony Dispensary, north of Beirut. The clinic offers medical services to locals and refugees in the Lebanese capital.

Speaking with Lebanese Christians and displaced Syrian and Iraqi refugees at the dispensary, Cardinal Dolan held several children aloft as the delegation traversed a tight corridor, lined with white plastic chairs in which sat dozens of patients.

The clinic, which is open less than four hours each morning, treats 80 people each day.

Sevan Aziz, originally from Baghdad, visits the clinic regularly for her 82-year-old mother, who has high blood pressure.

“Here it’s better (than other regional clinics) because I know everyone,” Aziz said. “It’s far from home, but my mothers needs someone who understands our needs, and I get that here.”

The dispensary, now in Beirut’s Roueisset neighborhood, was initially founded in 1987 in the Jdeideh el-Metn municipality to serve Lebanese Christians and Shiite Muslims who lived in the area but could not afford medical consultations or the cost of recurring prescriptions. In 2003, more than 400 Iraqi families settled in nearby Roueisset, overwhelming the dispensary with the community’s growing needs. The dispensary received additional support from the Good Shepherd Sisters, who had been working with area children since 1998.

Today the 35 doctors employed by the dispensary work annually with more than 20,000 refugees, many of whom have fled the seven-year civil war in Syria and the recent occupation of the Islamic State in Iraq.

CNEWA funds clinic projects, including the disbursement of chronic medications to more than 600 individuals who require prescriptions that treat Alzheimer’s, asthma, diabetes, hepatitis, epilepsy, osteoporosis, cancer and heart disease. Clinic officials say without CNEWA support, many patients needing medical services could not otherwise afford the $12 co-pay set by the Ministry of Health.

“Our motto is that religion is for God, the dispensary is for all,” she said.

Sarouat Mourtada of Baalbek, Lebanon, sat in a chair cradling her 15-month-old daughter, who was there for a routine medical exam.

“I asked around and they told me it (the clinic) was good, and they offer pediatrics,” Mourtada said. “This is the only clinic” nearby.

Her husband, who did not give his name, said he seeks pediatric care here for his two young children who live in Lebanon. “When I came from Syria, I came directly here.”

The clinic serves a diverse population from more than 10 countries.

“We hear so much about animosity between different faiths, but at these centers, we’ve heard people come together,” Archbishop Miller said. “The aspect of generosity and ability to receive others maybe makes us ashamed of how little we do” in North America.

A side street conceals the Karagheusian Center, off a main thoroughfare in one of the capital’s most densely populated and industrial districts. A waiting room filled with patients momentarily paused as the delegation passed, before the room buzzed again with the action of care.

The center in Bourj Hammoud, a predominantly Armenian neighborhood, is likewise supported by CNEWA and three Armenian churches. The center provides care for more than 3,500 patients each month.

Serop Ohanian, the Lebanon field director of the Howard Karagheusian Commemorative Corp., said the government cannot provide many services, “so it has empowered organizations to do its job.

“I’m grateful that we have the blessings of the church and the neighborhood churches,” he added.

Mouhammad Hamid, 33, lost his vaccination card when he and his family fled Aleppo, Syria. A nurse helped him fill out a new card, with the help of a picture he’d taken of his card and provided to the nurse through WhatsApp.

A short distant from the center, an Armenian church hosted the CNEWA delegation and more than 50 residents from the community, many of them refugees from the ongoing civil war in Syria, less than a two-hour drive.

“When we came to Lebanon we had so many fears … our fears were associated with also how to educate our children and how they become appropriate citizens in a different country,” said Zarmine Panoghlian. “Karagheusian offered lessons and teachings on how to get adapted to this new environment.”

She said she hoped the church leaders would visit more often and praised them for their continued support.

“We didn’t know when we came to Lebanon there would be people who welcomed us so openly,” Panoghlian said.

PREVIOUS: Christian pilgrims to Holy Land get tattoos to mark their pilgrimages

NEXT: Violent extremists tarnish image of their own faith, cardinal says