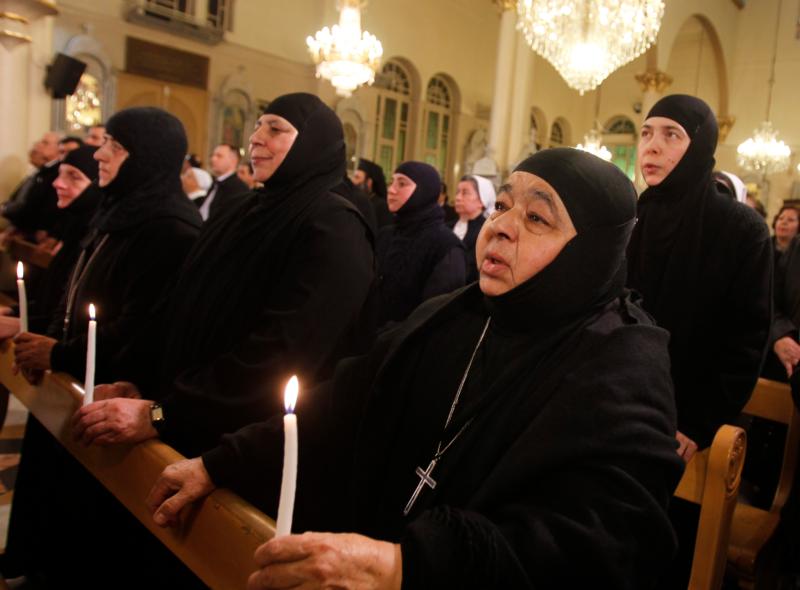 Women religious, who were freed after being held by rebels for more than three months, attend a 2014 prayer service at Holy Cross Church in Damascus, Syria, after their release. (CNS photo/Khaled al-Hariri, Reuters)

ROME (CNS) — Today’s women religious belong to “a long line of courageous women” whose faith in God and love for humanity led them to put their lives at risk, said Sister Patricia Murray, an Irish member of the Institute of the Blessed Virgin Mary.

In situations of war and conflict around the globe, women religious face the same dangers as the women they live and work with, including rape and murder, said Sister Yudith Pereira-Rico, a member of the Religious of Jesus and Mary and executive director of Solidarity with South Sudan.

The two sisters and several others spoke April 11 at a symposium, “Women Religious on the Frontlines,” sponsored by the U.S. Embassy to the Holy See, the International Union of Superiors General and Solidarity with South Sudan, an international project of women’s and men’s religious orders.

Callista Gingrich, the U.S. ambassador, opened the conference saying women religious are “often the unsung heroes of the Catholic Church” and that their service to people and their contributions to peace and justice “should be emulated and celebrated.”

The ambassador used the occasion to introduce Sister Maria Elena Berini, a 73-year-old Italian member of the Sisters of Charity of St. Jeanne Antide Thouret. On the recommendation of the embassy, Sister Berini, a missionary in the Central African Republic, was honored in March as one of the U.S. State Department’s “International Women of Courage.”

Sister Murray, executive director of the International Union of Superiors General, told the gathering that for centuries women religious have been “leaving home and crossing seas, deserts, mountains and vast plains to reach those most in need and, particularly, those most abandoned.”

Throughout the conference, people mentioned women religious who, living among the poor and displaced, were victims of war and murder, particularly in Latin America and in Africa.

Archbishop Paul Gallagher, the Vatican foreign minister, set aside his prepared text to speak of the women religious he met or heard stories about in his work as a Vatican diplomat, paying particular homage to three elderly Xaverian Missionary sisters brutally murdered in Burundi in September 2014.

The Rome conference focused especially on the work of women religious in combatting human trafficking and assisting survivors and on their steadfast commitment to communities, like in South Sudan and Syria, that are experiencing conflict and war.

In panel discussions on both issues, the sisters emphasized the need for education: to warn people about the false promises traffickers make; to help women and girls gain the knowledge and skills they need to survive and thrive, and to participate actively in peace and reconciliation processes; and to educate men and boys to respect women and girls.

Speaking particularly about trafficking victims forced into prostitution, panelists said a key part of prevention is eliminating demand by educating men about the slave conditions under which most prostitutes work and the fact that using a woman like that is a violation of her dignity.

Dominican Sister Cecilia Espenilla, who coordinates the Philippine branch of the anti-trafficking organization Talitha Kum, said, “There is that mentality, culturally and socially, that women are second-class, that women are of less value or no value at all.”

PREVIOUS: As economic crisis drags on, Venezuelan nuns forced to turn away elderly

NEXT: Pontifical Commission for Latin America proposes synod on women