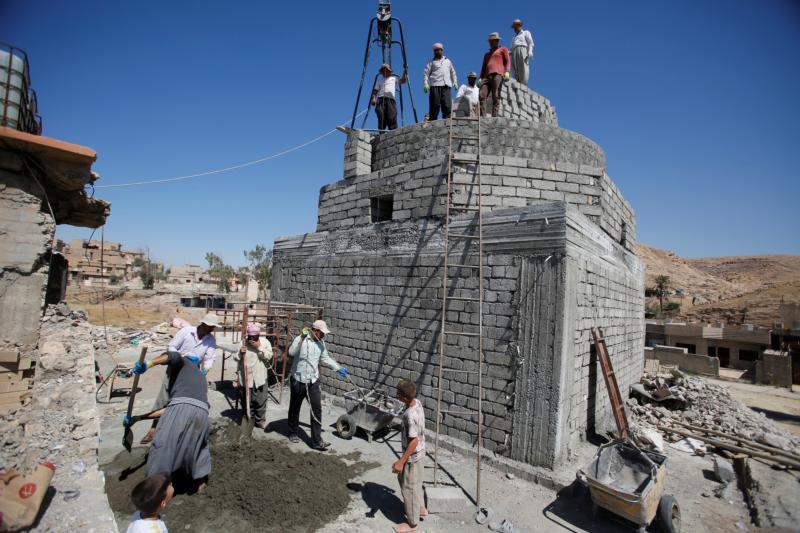 Workers rebuild a Yezidi shrine in 2017 after is was destroyed by Islamic State in Bashiqa. (CNS photo/Khalid al Mousily, Reuters)

AMMAN, Jordan (CNS) — A top official with Catholic Relief Services, visiting northern Iraq, said new life is evident for those who suffered the injustices and atrocities of the Islamic State invasion of their ancestral lands but some grave challenges remain.

“I see the hope of the Resurrection, while still the experience of the Cross is the reality for many people,” William O’Keefe of Catholic Relief Services told Catholic News Service by phone from Irbil, Iraq.

“Yezidis in Sinjar have no security. Christians in the mixed areas have insufficient security. There are political problems. Sunnis in central Iraq experience tribal insecurity issues,” said O’Keefe, vice president of government relations and advocacy for CRS, the U.S. bishops’ international humanitarian aid organization based in Baltimore.

“There are also people who haven’t returned to their villages or who are not able to return, and that is a serious problem that will fill my prayers,” he told Catholic News Service March 29, ahead of the Easter holiday.

“And yet there are signs of life. People I spoke with six months ago see a lot of process and evidence of shop openings, cars, and all that is good,” O’Keefe said. “But there needs to be more economic activity to feel like there is momentum.”

Three million people remain internally displaced in Iraq, particularly religious minorities who were victims of the Islamic State in 2014. Many Christians were threatened with death if they did not leave; others, like the Yezidis, were kidnapped and forced to convert to Islam to save their lives.

O’Keefe said CRS is helping Christians, Yezidis, Arab Sunni Muslims and others who have been displaced to return to their villages with programs that include housing reconstruction program and assistance to vulnerable individuals to upgrade their houses to the minimum accepted standards so they can re-establish their lives.

“It’s amazing, the destruction and the meanness of ISIS occupiers who, on their way out, intentionally burned the interiors of these homes to make the return as difficult as possible,” O’Keefe said of the town of Bashiqa, located on the Ninevah Plain.

There, he visited a Christian family and a Shobak or Shiite household, to discuss the renovations taking place in their houses with CRS help.

“People are excited about the possibility of returning and having a significant part of their house: living quarters, kitchen, and common room fixed, so that can come back and rebuild,” he said.

“CRS and other groups are doing a lot of work on reconstruction and rebuilding, but there seems to be so many gaps in the political framework,” he said of the continuing political instability both in Baghdad and in the predominantly Kurdish north, which failed in its independence bid last September.

“There are people who are not yet returning for a variety of reasons,” he said. “Foremost, is that they simply do not feel safe. The state does not appear to be playing its role (in providing public security). That’s a significant problem.”

“There is a continuing lack of confidence in the security framework,” so militias composed of Shiites, Christians and others continue impose their presence in part because of the “inability of the Kurdish authorities and the Iraqi government to finalize a security framework that will work for the people,” O’Keefe said.

He also said that the Iraqi government’s failure to pay government employees their salaries has also been a “disincentive for return.”

To help address this issue, “CRS is starting a livelihoods program, with the goal of helping returnees to restart small businesses they had before they left,” O’Keefe said. He explained that this program will not provide training for people to start new professions. Rather, it is to “help these small businesses to have their working capital and supplies to re-establish their business.”

To address needs of the entire family, CRS is also seeking to bolster the education system in areas once under Islamic State control by providing “an emotional and social learning component in schools.”

Most of the physical infrastructure of the schools is being built by the U.N. Development Program or UNICEF.

“Our role will be to provide teacher training and the more soft-side (educational aspects) so that children will be able to learn in schools in a positive environment,” O’Keefe said. The program will target mainly primary schools.

O’Keefe said U.N. officials told him that “demonstrable progress” is being made on work to rebuild the areas’ electrical grid, water and sanitation systems damaged by Islamic State militants.

While the international Christian community, including CRS, and local churches are supporting displaced Christians and other Iraqi religious minorities to be able to return to their homes and to assist with reconstruction, financial support is becoming tighter because “some of the specialized needs require so much more than what the international community is providing at this time,” O’Keefe warned.

“We can’t do this vital work alone. We rely on brothers and sisters in United States and the U.S. government for support,” he said.

PREVIOUS: Venezuelan bishops: Jail fire that killed 68 could have been prevented